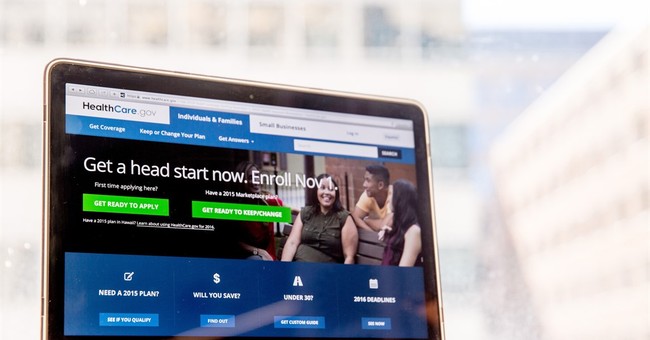 Once was a shock. Twice was an outrage. Thrice is a nightmare that won't end.

Over the past three years, my family's private, individual health insurance plan -- a high-deductible Preferred Provider Organization -- has been canceled three times. Our first death notice, from Anthem Blue Cross Blue Shield, arrived in the fall of 2013. Our second, from Rocky Mountain Health Plans, came last August. Three weeks ago, we received another ominous "notice of plan discontinuation" from Anthem informing us that the insurer "will no longer offer your current health plan in the State of Colorado."

Then I imagine Vincent Price's evil "Thriller" laugh reverberating at the end of that cruel punchline: Mwahahahahahaha!

Like an estimated 22 million other Americans, I am a self-employed small-business owner who buys health insurance for my family directly on the individual market (as opposed to group insurance through a company or third party). Our most recent plan features a $6,000 deductible with a $1,000 monthly premium. It's nosebleed expensive, but provides us access to specialists not curtailed by bureaucratic gatekeepers. This has been important for us because several members of my family have required specialized care for chronic illnesses.

Once again, however, I'll soon be talking about our plan in the past tense. Choices for families like mine have evaporated in the era of Obamacare. In Colorado, UnitedHealthCare and Humana will cease selling individual plans next year. Rocky Mountain Health Plans is pulling out of the individual market in all but one county. Nearly 100,000 of my fellow Coloradans will be forced to find new insurance alternatives as open enrollment approaches on Nov. 1, according to the Denver Business Journal. As Anthem abandons PPOs, the cost of remaining individual market plans will soar an average of 20 percent.

It's a nationwide implosion.

The private individual insurance market is in peril. The government-run exchanges are flailing. And the vaunted nonprofit Obamacare co-ops that were supposed to dramatically lower costs have bombed despite billions in taxpayer subsidies.

I believe this insurance market meltdown -- which many of us predicted from the get-go -- is not by accident, but by design. Or as Oklahoma Insurance Commissioner John D. Doak put it: "This system has been doomed from the beginning."

Smug propagandists for Obamacare, such as liberal magazine Mother Jones, continue to dismiss the plight of millions of families like mine and accuse us of concocting a "phony" crisis. But it's the architects of Obamacare who prevaricated all along. Remember: Obamacare godfather and MIT professor Jonathan Gruber bragged that "lack of transparency" was a "huge political advantage," along with what he derided as "the stupidity of the American voter."

This wealth redistribution Trojan horse was sold to gullible Americans as a vehicle for expanding "affordable" access to health insurance for all. Now, millions of us are paying the price: crappier plans, fewer choices, shrinking access to specialists, skyrocketing price tags -- and no end in sight to the death spiral.

TOPICS: Culture/Society; Editorial; Government; US: Colorado
KEYWORDS: 0bamacare; 0carenightmare; malkin; obamacareinsurers; obamacarepremiums Navigation: use the links below to view more comments.
first 1-20, 21-40, 41-59 next last
1 posted on 10/12/2016 4:30:15 AM PDT by Kaslin
[ Post Reply | Private Reply | View Replies]
To: Kaslin
Obamacare was designed to give the finger to middle class Americans... including small business owners.

The folks who benefited from Obamacare were white liberal elites and the black underclass that props them up... Everyone else lost.

All by plan to change to a single payer system totally controlled by government.

So it is working as designed.

Its chickens*** namesake is getting out of town one step ahead of the posse.

He thinks he can hang around like a bad smell to do his own PR in a desperate bid to erase 8 years of sloth, malice and incompetence.

He will quickly change his mind when every question is about his ruination of a quasi-free market.

Another great piece from Michelle Malkin.

You know, as you look out across the broad array of failures and incompetence of the Obama/Clinton cabal, ObamaCare is the failure that is so obvious to middle class Americans.

In terms of voter outrage, this is the one issue that is hurting the Establishment the most.

I had lunch with an old friend last weekend. He just thought the solution to this problem was so obvious — we need Single Payer. Most other countries have it, you know, and they all love it. It works great.

I just kept on chewing.

But clearly, the Democrats understand how this is expected to play out. They’ve been coached and they know what comes next, and they’re just gosh darn excited for the wonderful stuff to come.

That would have been the time to stop chewing.

They do NOT “love it”

Ask them right out- who the F*** told you they love it, and if they are too stupid to recognize propaganda?

This is not the time to play nice anymore.

Your job- and EVERYONE FREEPERS job is to find and convert as many people as possible.

I've never seen a better description of these Obama years.

Everyone I know who voted for Obama and Obamacare are now voting for Trump.

All by plan to change to a single payer system totally controlled by government.


Bingo!! Single payer was the plan all along. Death panels...yes they will be there. Most have learned it’s already a battle to get pre-approval from your health carrier for many procedures. Doctor and health care shortage? You betcha! Once the government starts deciding what to pay doctors, more will be retiring and fewer will enter the field. Maybe we can import more from 3rd world hell holes. But hey, they offer birth control, Viagra, gender surgery. So all is good. /s


Many states expanded Medicaid with federal funds. Now that those funds are expiring, it will be up to the state taxpayers to foot that bill. It will have a huge impact on states. In Wisconsin, Governor Walker did not expand Medicaid. SO, if you make under $11,000 in Wisconsin you are ineligible for health insurance subsidies though Obama care and are not eligible for Medicaid. Your only option is to pay the full premium.

Good thing nobody read the bill before passing it.

The guy lives in Maine. He works for Maine state government. So that should tell you something. He’s one of my oldest friends. I won’t pretend to agree with him, but losing his friendship (and his wife’s) would be pointless.

I’m in MA. I pick my battles carefully because I like to have a social life. If I insist on “converting” all of the people around me, I’d basically be hanging out with my dog.

“As Anthem abandons PPOs, the cost of remaining individual market plans will soar an average of 20 percent.

If it makes you feel any better, Anthem’s CEO earned $13 million last year, so he must be doing something right.

But it is legal to smoke weed in Colorado, and from what I hear, that fixes everything. /s

I don’t understand how Anthem’s CEO compensation is relevant to obamacare failing.

His job is to maximize profit and long term return to his shareholders. Apparently he’s doing a great job of it as he got his company out of the hellhole called obamacare.

What he’s actually paid is irrelevant.

Just trying to look at the bright side.

I would agree totally....it’s just a designed program to get people through eight to ten years....where payee or full-up Medicare will occur. It’s a “step”....that’s all.

Anyone who thinks that the end-step of full-up Medicare will be the same as what they get now....will be in for a shock. I think you will find in rural communities....probably thirty to fifty percent of hospitals will shut down, and what you get is a basic clinic, and a full-up hospital maybe an hour away by vehicle or 10 minutes by helicopter. If you live in a heavily urbanized area....you might get 100-percent of the features that you currently see. The rest of the nation? Not so much.