Between Wednesday night and Thursday morning, the broadcast networks of NBC, ABC, and CBS presented several reports on the “massive” and “historic” flooding devastating Louisiana, even comparing storm damage to that suffered during Superstorm Sandy and Hurricane Katrina. However, the one thing missing from the coverage was a single mention of the President of the United States, Barack Obama.

On Wednesday’s NBC Nightly News, anchor Lester Holt proclaimed: “Now to the flooding disaster still impacting tens of thousands of people in the south. That massive tropical system that devastated Louisiana is now bringing new flash flood watches to Texas. This as the scope of the destruction grows across the region.” Correspondent Gabe Gutierrez followed: “For five days that water has flowed south toward the Gulf of Mexico and Lake Pontchartrain, carving a path of destruction....Tonight, 11 million people in Texas are under flash flood watches.”

On ABC’s World News Tonight, anchor David Muir announced: “...those historic floods in the south. Authorities tonight saying the flood damage is now the worst natural disaster to hit the U.S. since Superstorm Sandy.” Correspondent Phillip Mena declared: “In parishes downstream, they're bracing for the approaching flood waters, and hoping their sandbags hold....and for the thousands in shelters tonight, the water can't recede fast enough.”

CBS Evening News anchor Scott Pelley told viewers: “Across southern Louisiana, a historic week of rain is giving way to months of misery ahead. Muddy water is draining from homes and streets, revealing devastation from storms that killed at least 11 people. 40,000 homes are damaged.” Reporter Omar Villafranca warned: “But as the water recedes, the damage becomes more clear, and cleanup could be costly. Less than 21% of residential properties in Louisiana have flood insurance.”

The morning shows continued to spell out the dire reality of the disaster. On NBC’s Today, co-host Savannah Guthrie managed to at least note reaction from the Obama administration – if not from the President himself:

Homeland Security Secretary Jeh Johnson will visit Louisiana today to gage the federal response to nearly a week of flooding that killed at least 13 people and has damaged tens of thousands of homes. Officials fear the state could be facing its worst housing crisis since Hurricane Katrina 11 years ago. FEMA says it's looking into lining up rental properties and temporary housing units. More than 70,000 people have already applied for federal disaster assistance.

On ABC’s Good Morning America, weather person Ginger Zee explained: “Louisiana still dealing with major issues. That was Sorrento that we saw first, that flooded already, and then there's an area, St. John's Parish, that’s still sandbagging because the flooding hasn't ended....the rivers keep rising even though the rain isn't falling as heavily. So we're still watching this.”

CBS This Morning was the only one of the three morning programs to offer a full report on the topic. Fill-in co-host Margaret Brennan set up the piece: “Historic flooding in Louisiana could lead to the state's biggest housing crisis since Hurricane Katrina. The disaster has led to at least 13 deaths, tens of thousands of homes are affected, forcing many people to stay in shelters. 20 Louisiana parishes have been declared disaster areas.” Villafranca again reported from the flood zone: “40,000 homes were damaged in the flood and it's clear parts of southern Louisiana will never be the same.”

Despite the damage being as bad as Sandy or Katrina, none of the network hosts or correspondents thought to mention that President Obama was still vacationing on Martha’s Vineyard in the midst of the crisis.

Such an omission stood in stunning contrast to how NBC, ABC, and CBS routinely hammered then-President George W. Bush over the government response to Katrina in 2005.

In fact, the same glaring media double standard was on display in 2010 during the Gulf Coast oil spill. At that time, a Media Research Center study found that only 1% of the network news coverage in the four weeks immediately following the spill passed any judgement on the Obama administration’s response to the disaster. In 2005, it only took those same networks 72 hours to start blaming the Bush administration for a slow Katrina response.

Campaigning for president a few years later, Obama slammed Bush for flying Air Force One over the floods. "We can talk about what happened for two days in 2005 and we should. We can talk about levees that couldn't hold, a FEMA that seemed not just incompetent but paralyzed and powerless, about a president who only saw the people from the window of an airplane instead of down here on the ground."

It would be a great idea if Trump did a flyover. Find an airport and give a news conference with the governor. Great optics and he would be unpredictable.

LA governor is Democrat these days. Might not be too welcoming.

Ouch! He claims he will be a uniter.

The media deliberately and intentionally, with full knowledge make the conscious choice to promote leftist politicians and to trash normal ones.

Governor Blanco and Nagin were getting their marching orders from DNC Headquarters all through Katrina.

Where are they now?

Trump IS going to Louisiana tomorrow!

He’s part of the Washington Cabral!

I blame the new Governor (D/BLM) and the President (D/BLM). 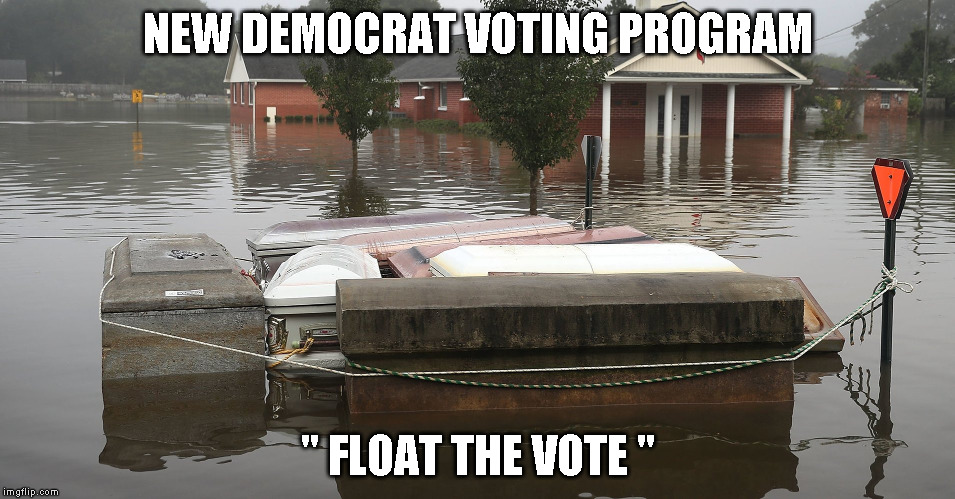 By ignoring it the democrats can get more votes in November...