Jeb! Bush spent about n hour recently with the editorial board of The Tampa Tribune, responding in depth to questions about a wide range of policies he would push if he is elected president of the United States.

He showed a clear command of the things he would face as commander in chief, speaking confidently and sounding much like a candidate who expects to sit in the Oval Office a little more than a year from now.

He even said at one point, â€œI want a guy (in office) who understands the issues.â€

That was a clear slap at Donald Trump, who has reduced political engagement to a sound bite that roughly translates, â€œTrust me, Iâ€™ll be great on (insert issue here).â€

So, while I was curious what Bush said that day, I was at least as interested in how he said it.

Thatâ€™s when it struck me. Voters can swing today over one issue, and sometimes a minor one at that. Being president is a lot more complicated than one thing, though, and itâ€™s not all that important to me that I agree with every position someone has.

There were things Bush did during two terms as Floridaâ€™s governor that I believed, and still believe, were wrong. He shouldnâ€™t have intervened in the Terri Schiavo case.

GO Jeb! Keep burning up all of that GOPe cash!

Jib, Jab, Jeb. It sounds as if it is a verb conjugation. 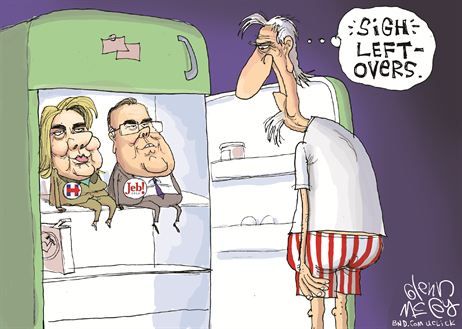 Does that say somethin’?

Yeb must have paid off this paper to write this article.
No sane person thinks Yeb will win more primary votes.

He is such a freakin loser....and his defiance to quitting the race despite his horrid numbers, and the fact that his campaign is wasting money, should be all the voters need, to see that an idiot that thinks like that, is NOT what we need in the white hut! The country is tired of stupid!

Jeb, We know what your positions are and we do not like them.

King Sisyphus was made to endlessly roll a huge boulder up a steep hill, only to see it roll back down to the bottom, which ended up consigning Sisyphus to an eternity of useless efforts and unending frustration.

Jeb has been given just such a labor. Aside from Tippy Toes making a fool of himself, that has got to be the coolest backdrop for a debate I’ve ever seen.

Jeb just doesn’t have it in him—No fire in the belly. Mitt Romney must be giving him advise or something. I have never see someone do so poorly—even his adds are awful—they make him seem weak and “low energy” one showed a town hall with eldrly people asleep. Who did he hire to make them? Ivanka Trump?

No, if Ivanka was around, even old codgers like me would be awake...just saying....

The GOPe will select Jeb as the one who would write the best concession speech in the tradition of Dole, McCain, and Romney.