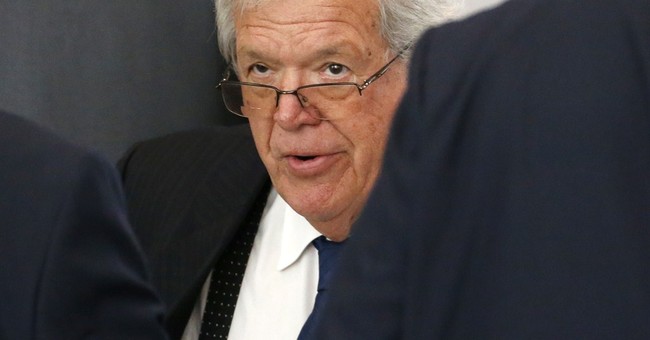 Lavrenti Beria, who ran Josef Stalin’s KGB, once commented on the ease with which the feared organization he headed could convict any individual at will: “Show me the man and I’ll find you the crime.” But that was early 20th Century Soviet Union, and this is 21st Century America, you might say; we have all manner of procedural safeguards in place to guard against individuals being charged and convicted of things not truly evil or harmful to others. Ahh, were it so.

Just how easy is it in 21st Century America to run afoul of one or more of the many thousands of federal criminal offenses on the books? Just ask Former Speaker Denny Hastert, now under federal indictment for nothing more egregious or harmful to our nation’s well-being than trying to conceal from prying eyes payments of his own money to another individual, and then not telling the FBI what it wanted him to reveal in order to incriminate himself.

Many of these criminal offenses have been on the books for decades -- some conceived at the same time as our Internal Revenue Code a full century ago; others the offspring of the “War on Drugs” in the late 1960s. However, the zeal with which Uncle Sam’s agents target individuals who seek nothing more than to keep certain personal activities private, has become pronounced in recent years.

We live in a world in which the federal government not only makes it nearly impossible to engage in any private financial transaction, but actually resents the person – to the point of making them a felon -- who dares try to evade revealing to federal regulators and investigators what they are doing with every red cent of their own money.


From the massive, NSA-directed meta-data collection programs revealed two years ago by Edward Snowden, to the FBI’s continuing efforts to outlaw any encryption of electronic data by individuals or companies to which the federal government is not given the keys, America’s landscape is peppered with legal landmines set for people and businesses trying to keep a small part of their world private.

The Hastert indictment is clear evidence of this alarming trend. The former Speaker faces a decade or more in federal prison, but not for allegedly committing any substantive criminal offense. Even if he eventually is acquitted, Hastert’s reputation already is ruined simply because he wanted private transactions to remain private; and because he elected not to incriminate himself when answering questions put to him by FBI agents.

As The Atlantic’s Connor Friedersdorf writes, Hastert is but the latest in a growing list of Americans “being prosecuted for the crime of evading federal government surveillance.”

One does not have to possess the standing of a former Speaker of the House of Representatives to earn such attention from Uncle Sam. Last July, Lyndon McLellan, a convenience store owner in North Carolina, had his life-savings of $107,702.66 confiscated by the IRS for violating one of the same financial reporting laws that ensnared Hastert. For simply trying to reduce the paperwork burden on his bank with regard to certain transactions relating to his savings, McLellan was forced to mount a long and costly legal fight in order to see his money again.

The use of tightly crafted and clearly defined financial laws can in fact provide legitimate tools with which federal prosecutors are able to strike at “real” criminals engaged in activities that seriously harm other people. However, contemporary financial regulatory powers go far beyond what could be considered reasonable weapons with which to prosecute, convict and imprison such individuals.

For example, most individuals do not know that if you engage in a financial transaction considered “suspicious” by an employee at a federally-insured financial institution, the employee is required to report that transaction to federal investigators. These Suspicious Activity Reports or “SARs” are mandated in addition to other federal paperwork, such as “CTRs” or Currency Transaction Reports, which must be filed by anyone depositing or withdrawing more than $10,000 cash at a bank.

Many of these financial reporting laws have been broadened considerably since 9-11; and almost all have criminal penalties attached to them. But they are only the tip of the “gotcha iceberg” with which the federal government can control individuals and businesses. As noted criminal defense lawyer Harvey Silverglate concluded in his 2009 book, Three Felonies a Day – How the Feds Target the Innocent, it has become virtually impossible for even the most intelligent and learned individuals to, “predict with any reasonable assurance whether a wide range of seemingly ordinary activities might be regarded by federal prosecutors as felonies.”

So, before jumping to any conclusions about Denny Hastert, consider for a moment just how easy it would be for any of us to suddenly find ourselves similarly charged, for wanting nothing more than to keep certain personal financial actions private from Big Brother.

By this, I assume you are not talking about young boy booty. I think that is pretty much only a trap for homosexuals, and apparently becoming less and less of one with each passing year.

If Dennis Hastert had not been a "chicken hawk" (as homosexual predators are known.) He would not be now facing trumped up charges.

I don’t plan on hooking up with a teenage boy no matter how strong they come on to me, Bob.

3 posted on 06/10/2015 10:09:07 AM PDT by Opinionated Blowhard ("When the people find they can vote themselves money, that will herald the end of the republic.")
[ Post Reply | Private Reply | To 1 | View Replies]
Hastert can recuse himself by declaring himself a “she” and blaming traditional thinking as to why he hid his past pedephile/homosexual activities.
4 posted on 06/10/2015 10:10:10 AM PDT by lormand (Inside every liberal is a dung slinging monkey)
[ Post Reply | Private Reply | To 1 | View Replies]
To: DiogenesLamp
I think that is pretty much only a trap for homosexuals, and apparently becoming less and less of one with each passing year.

Indeed. For America today, its not a trap, its a prize. And you may even get a TV and book deal out of it also.

I haven’t forgotten that it was banking processes that snared Rush Limbaugh on that drug thing.

What kind of former elected official would ever pay $3.5M in "hush money" to cover up criminal activity that: (1) occurred long before he was in public office, and (2) occurred so long ago that the statues of limitation for prosecution have long passed?

Good riddance to a scumbag politician.

Basically they’ve made paying for a sandwich with cash legal but paying for say a car or a house with cash would be considered “suspicious” i.e. basically illegal.

That’s the basic point of the article.

11 posted on 06/10/2015 10:18:48 AM PDT by Night Hides Not (Remember the Alamo! Remember Goliad! Remember Mississippi! My vote is going to Cruz.)
[ Post Reply | Private Reply | To 1 | View Replies]
To: Kaslin
Denny Hastert said that he made the allegedly "structured" withdrawals because he didn't trust the bank. That's a ridiculous excuse because he was the bank's valued customer, the very basis of their business, and the bank would obviously never do anything to harm their business /sarc.

All money is Caesar's money. All Caesars are God's Caesars.

“Did you really think that we want those laws to be observed?” said Dr. Ferris. “We want them broken. You’d better get it straight that it’s not a bunch of boy scouts you’re up against—then you’ll know that this is not the age for beautiful gestures. We’re after power and we mean it. You fellows were pikers, but we know the real trick, and you’d better get wise to it. There’s no way to rule innocent men. The only power any government has is the power to crack down on criminals. Well, when there aren’t enough criminals, one makes them. One declares so many things to be a crime that it becomes impossible for men to live without breaking laws. Who wants a nation of law-abiding citizens? What’s there in that for anyone? But just pass the kind of laws that can neither be enforced nor objectively interpreted—and you create a nation of law-breakers—and then you cash in on guilt. Now that’s the system, Mr Rearden, that’s the game, and once you understand it, you’ll be much easier to deal with.”

This reporting of over ten thousand, deposit or withdrawal, came from our friendly government. When customers became aware of the reports, they began lessening the amount of the transaction, making it $9,900, 9,599. Anything to avoid the $10,000 figure. This became known as structuring and it was to be reported. Banks faced $500,000 fine for not filing the report.
Years ago this was going on with young visiting Irish guys and it wasn’t hard to figure out what was happening. So it is just like everything else. The baddies tend to spoil it for the millions of law abiding.

Now the government apparently considers anything going on in your life is their business.

The funny thing is that the people who most strongly believe this are the very ones screaming “Get the government out of my bedroom” or Something obscene and catchy like “get your laws out of my vagina”.

If a private investigator showed up claiming to have video of what I had done every moment since I met my wife for the first time, my responses would be (1) that’s pretty creepy of you, and probably boring, and (2) cool can I have a copy of the occasional good parts? However, I’d guess that most politicians have skeletons in their closet, creepy urges, flings on the road, and other issues. Most are probably not as bad as Hillary’s husband (the rapist), or Denny Hastert (the gay pedophile), but they probably want their secrets kept secret.

I worry how easy it would be for a sleazy and corrupt occupant of the White House to use metadata to find secrets that could be used for blackmail. General Petraeus is a problem? Okay, check his phone calls. Long late night calls to a woman? Bingo! Chief Justice Roberts might vote in accordance with the Constitution? Not a problem; check him out too.

16 posted on 06/10/2015 10:24:58 AM PDT by Pollster1 ("Shall not be infringed" is unambiguous.)
[ Post Reply | Private Reply | To 1 | View Replies]
To: Kaslin
Lavrenti Beria, who ran Josef Stalin’s KGB, once commented on the ease with which the feared organization he headed could convict any individual at will: “Show me the man and I’ll find you the crime.”

“There's no way to rule innocent men. The only power any government has is the power to crack down on criminals. Well, when there aren't enough criminals, one makes them. One declares so many things to be a crime that it becomes impossible for men to live without breaking laws.” ― Ayn Rand

You missed the point.

Yep, Townhall decided to zoom in on money laundering laws, not molesting children.

He had a chance to change the law but he didn't. He didn't care when it was the rest of us under the boot heel of big government.

He should get no sympathy now, the filthy pervert.

Let's find a decent citizen to support instead of this "coach" who destroyed boys lives.