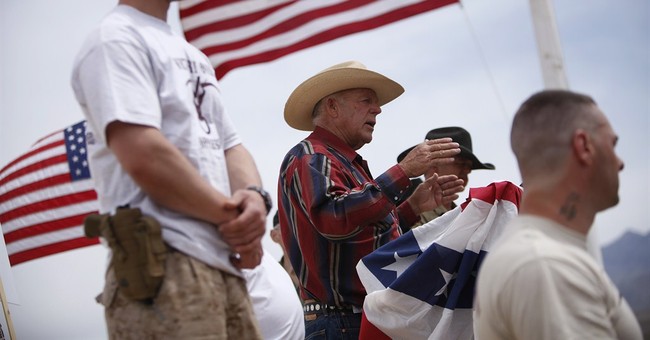 One of the biggest land grabs in American history occurred in 1976, when President Jimmy Carter signed into a law the “Federal Land Policy and Management Act.” That stroke of the pen transferred hundreds of millions of acres of land, located primarily in the western states, into the control of the federal government. In reaction, an alliance of ranchers, farmers, and other concerned citizens – the “Sagebrush Rebels” as they came to be known -- challenged the move and sought to return the land back into the hands of the states. Ronald Reagan, at the time running for president, supported the action of the states. “I happen to be one who cheers and supports the Sagebrush Rebellion,” the Gipper remarked in 1980; “count me in as a rebel.”

Today, the federal government controls nearly 640 million acres of public land (28 percent of the entire United States). In fact, nearly half of all western states (and 62 percent of Alaska) is “owned” by Uncle Sam and controlled by bureaucrats in Washington, D.C.; only four percent of other states fall under federal control. The feud over federal ownership and management of public lands in western states is nothing new. What is new, however, is the propensity of federal agencies to escalate confrontation with ranchers in those areas; most recently seen in the Obama Administration’s arrogant (and near violent) attack on Nevada rancher Clive Bundy. That single incident has reignited the “Sagebrush Rebellion” and pushed western states into action.

Last week, more than 50 political representatives from nine western states met in a legislative summit to begin to seriously discuss how to start the process of transferring federal public lands back to the custody of the states. “We have to start managing these lands,” Montana State Sen. Jennifer Fielder told the press during the summit. “It's the right thing to do for our people, for our environment, for our economy and for our freedoms.”

Holding the meeting in Utah was not coincidental, as the state is at the epicenter of western states’ calls for a return of public land back into their control. Two years ago, in March 2012, Utah Governor Gary Herbert signed H.B. 148, the “Transfer of Public lands Act and Related Study” (TPLA), which demands the federal government extinguish and transfer title to more than 20-million acres of land back to the state by the end of 2014 -- under threat of lawsuit.

While that legislation did not touch national parks, military installations, or national monuments, it did cover vast areas the federal government controls for no real reason other than to control it. Ken Salazar, then U.S. Secretary of the Interior, the bureaucracy that oversees the many federal agencies that manage public lands, said the law was “nothing more than a political stunt.” However, the Federalist Society’s legal review of H.B. 148 concluded that critics of the law should not dismiss it so quickly. “There are indeed serious legal questions to consider with the TPLA,” explains Chapman University Law Professor Donald J. Kochan. “At the very least, there are open legal questions involved in the TPLA that have never received definitive resolution in the courts,” he notes.

The legality of H.B. 148 will likely center on the federal government’s power “to dispose of and make all needful Rules and Regulations respecting the Territory or other Property belonging to the United States . . .” found in Article IV, Section 3 of the U.S. Constitution. On the surface, the government’s near limitless power in this area makes Utah’s line in the sand tough to defend; but as Kochan notes, there is very little case law about the federal government’s duty to eventually do something with the land rather than just hold onto it, unused and ill-managed in perpetuity.

Moreover, as the Congressional Research Service reported last week, the Obama Administration’s poor “management” of America’s oil and natural resources on federal land illustrates that there is a strong argument that federal holdings of public land is doing great damage – rather than benefit -- to the country’s economic interests. According to the CRS report, for example, crude oil production on federal land fell by six percent since Obama took office in 2009; in the same time period, oil production on private land soared by 60 percent. Reports such as these, as well as the Bureau of Land Management (BLM) declaration of war on ranchers like Bundy, only buttress the case against continued federal control and management of its vast holdings.

The outcome of Utah’s “Sagebrush Rebellion” is unclear, but H.B. 148 is at least a solid blueprint for other states to follow to begin reclaiming public land taken by fiat from them decades ago. The intensified push from states for the return of federal land leaves the Obama Administration with few options. It can either peacefully return land back into the hands of the states before the issue is decided by the courts, or it can continue with its aggressive policing of federal lands that has already lead to near-violent confrontations between private citizens and federal agencies – some of which, such as BLM, seem clearly to be spoiling for a fight. U.S. Senator Harry Reid, who for some reason gratuitously injected himself into the BLM confrontation with Bundy and his supporters and referred to them as “domestic terrorists,” has made clear he stands firmly with the bureaucrats.

Hopefully, more rational minds in Washington will keep Big Government bullies like Reid out of the debate, and peacefully resolve this fundamental conflict over federal land management before it escalates further. This is a national debate too-long ignored.

Just carrying forward the Lyndon Johnson philosophy,”They’re all my helicopters” to the country in general.

The United States is a federation of STATES. The land belongs to the individual states. The US feral government should own ZERO land.

Except that Carter didn’t assume the presidency until January 20, 1977.

It's the People's land...not the governments.

All Federal lands should revert to the states.

Here is BLM’s version of the story:

I support the Sagebrush Rebellion, then and now. The federal government should not own any lands not directly pertaining to the restrictions placed on it by the Constitution. Take ‘em back!

Sooner or later these liberal skeeves are going to stumble onto the issue that causes all hell to break loose.

And that is exactly what they are trying to do.

That would make President Ford the signer.

The Sagebrush Rebellion didn’t hit the papers & magazine covers ‘till spring of 1978.

About the same time as Howard Jarvis & his tax revolt.

Same year as the Bakke decision against quotas.

And in 1978 the `Equal Rights Amendment’ failed to achieve ratification & went down in flames.

Jimmah Carter still had more than two years left to screw this country up, & he did. But Ronald Reagan was ready & waiting in the wings. 1980 was sweet victory.

Use the same tactics against the criminal federal government that they use against us.

States can send in their state bureaucrats to close down BLM and Dept. of Interior buildings for failing to meet state health and building codes. Make these federal fascists camp out in tents. Then condemn those tents as unsafe and unfit for human habitation.

Turn the tables on the feds....

I'm okay with the Constitution's guidance on military installations/dockyards, and D.C. itself. Other than that all National Parks, Forests, Monuments, Memorials, BLM land, watersheds/waterways, everything, should go to the states. The big issue is infrastructure (interstate highways and bridges) - not quite sure how to adjust for that. Maybe some type of agreement between states for funding, but keep the fed out of it.

16 posted on 04/23/2014 3:17:30 PM PDT by IYAS9YAS (Has anyone seen my tagline? It was here yesterday. I seem to have misplaced it.)
[ Post Reply | Private Reply | To 3 | View Replies]
To: research99
True, might be confused with this H.R. 10587, the Public Rangelands Improvement Act of 1978 which was signed by President Carter and added shark teeth to the law signed by President Ford (Federal Land Policy and Management Act of 1976)...those added teeth are what added gas to the smoldering fire.

So Gerald Ford signed this just a week or two before the election he lost to James Earl “Nucular” Carter.

Ford deserved to lose, but too bad we got stuck with such a pathetic specimen of sputum and pablum as Carter.

19 posted on 04/23/2014 4:39:10 PM PDT by backwoods-engineer (Blog: www.BackwoodsEngineer.com)
[ Post Reply | Private Reply | To 1 | View Replies]
To: E. Pluribus Unum
The United States is a federation of STATES. The land belongs to the individual states. The US feral government should own ZERO land.

Must be said over and over. The Federal Government has become too big and powerful. It is closer to communists countries in it's control of each and every American. Dictatorship is has no place in our Country.