What is a good resource to try and understand the real story behind this conflict?

One of the worst things this country has ever done.

7 posted on 03/24/2013 4:18:50 PM PDT by DuncanWaring (The Lord uses the good ones; the bad ones use the Lord.)
[ Post Reply | Private Reply | To 1 | View Replies ]
To: Ravnagora
And the Butcher of Belgrade, Wesley Clark, major military suck up and former B. Clinton yes man - celebrates going on to fame and fortune as a cable channel talking head ... while ignoring the many sheets of black plastic roads, mock up planes and tanks he destroyed during the so-called war.

But, it was a good way to repay the Serbs for their help during WWII, and to get the Albanian muslim nazi thugocracy into Kosovo - whereupon they destroyed many centuries-old Christian monasteries, burning priceless books and manuscripts. Thus setting the stage for modern muslim jihads.

To bad the Internet was only in its infancy at the time, else the MSN lies would have been exposed.

Wow, I’m impressed. That writer put more spin in that one article than the US Lame Stream Media ever could. But why let a little thing like facts get in the way? 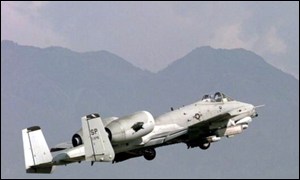 A British scientist says the Americans' use of depleted uranium weapons in the war with Serbia is likely to cause 10,000 extra deaths from cancer.

A British biologist, Roger Coghill, says he expects the depleted uranium (DU) weapons used by US aircraft over Kosovo will cause more than 10,000 fatal cancer cases.

Mr Coghill, who runs his own research laboratory in south Wales, was speaking at a London conference called to discuss the use by American and British forces of DU in Iraq in the 1991 Gulf war.

He said there had been evidence in other parts of the Balkans of elevated radiation levels during and soon after the war with Serbia.

In mid-June scientists at Kozani in northern Greece were reporting that radiation levels were 25% above normal whenever the wind blew from the direction of Kosovo.

And Bulgarian researchers reported finding levels eight times higher than usual within Bulgaria itself, and up to 30 times higher in Yugoslavia.

DU is a by-product of the enrichment of uranium for making nuclear weapons and reactor fuel. It is 1.7 times heavier than lead, and is used for making armour-piercing rounds.

Both the Pentagon and the Ministry of Defence insist that it poses no significant danger. But Mr Coghill says that, while DU in its inert form is safe enough, when it strikes a target it does become a real danger.

"In an impact DU catches fire, and much of the round is turned into burning dust. The particles are extremely small, they can travel up to 300 kilometres. They are also beta-emitters, which are dangerous if inhaled."

The particles can then lodge in the lungs, resisting the body's attempts to flush them out, and can wreak havoc with the immune system. They can migrate to any tissue, though they often make for the kidneys.

Using calculations based on the Pentagon's statement that one in five of the rounds fired by its A-10 aircraft over Kosovo were DU munitions, Mr Coghill estimates that more than 500,000 DU rounds were fired, of which half detonated.

He says that would have resulted in the release of about one thirty-thousandth of the amount of radiation released at Chernobyl in 1986. "But that was in the form of caesium on the ground. This is free-floating particulate matter."

Mr Coghill says the maximum effect will be reached about six months after the war, and he thinks the first cancers - probably leukaemias - will start to show up about a year after that.

"Throughout the Balkan region, I calculate that there will be an extra 10,150 deaths from cancer because of the use of DU. That will include local people, K-FOR personnel, aid workers, everyone."

He accepts that doubts remain over the effects of DU, and says it is vital to listen to critics who suggest that the higher cancer rates seen in parts of Iraq may have been caused by chemical weapons instead.

However, Mr Coghill notes that Bosnia, where DU weapons were used in 1995, was not attacked with chemical munitions, unlike Iraq.

"No epidemiological study can ever prove causality - all it can do is show an association. For proof, you need human, animal and cellular studies. All of those have been carried out on DU, and they support the association," says Mr Coghill.

"The total evidence is strong that DU is behind Gulf War Syndrome, and the increased rates of disease in Iraq - and in Bosnia.

"The birth deformities seen in the Gulf are identical to those seen in Bosnia, and in the children of some US service personnel who were exposed to DU."

He says there is telling confirmation of his distrust of DU. It comes in the form of evidence submitted by radiation physicists at the University of Maryland to the US Department of Energy in April on the long-term use of DU.

"They concluded that DU should never be used in a battlefield scenario, because of its hazards to health."