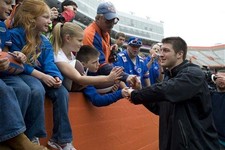 Tebow is expected to speak this weekend at Wildfire – a men’s conference hosted by the conservative Christian university. His remarks will be closed to the general public.

The professional football player is well-known for sharing his faith in Christ – but in recent weeks he’s come under fire from the national media and gay rights activists for speaking in churches that follow biblical teaching.

Huffington Post called Liberty a “notoriously conservative private college with an anti-gay reputation.” And more than 10,000 people have signed a petition launched by Faithful America calling on the quarterback to cancel his speech.

“Liberty University isn’t just another conservative Christian college,” the group stated. “its ground-zero for a global assault on the legal rights of gays and lesbians – and a symbol of everything that’s wrong with the religious right.

Faithful America said Tebow would give his “Christian faith a bad name” by speaking at the university founded by the late Jerry Falwell.

Several weeks ago Tebow canceled a speaking engagement at the First Baptist Church of Dallas – citing “new information” he had received.

He never elaborated on his comment – but sources close to the church told Fox News he backed out in part over the uproar surrounding the church’s position on traditional marriage – and salvation.

Pastor Robert Jeffress has been an outspoken leader in the nation’s culture wars – affirming from the pulpit traditional marriage and salvation through Jesus Christ.

The national media labeled the pastor as anti-gay and anti-Semitic – charges that were vehemently denied by the church and the many national religious leaders.

“To me, the real issue here is the controversy this has generated,” Jeffress said at the time. “It’s amazing that a church that believes faith alone in Christ is what saves a person and that sex should be between a man and a woman in a marriage relationship – that somehow those beliefs are considered hate speech? That is historic Christian doctrine for the past 2,000 years.”

They claimed Liberty University bans gay students and shut down its College Democrats chapter over the party’s views on gay rights. They also alleged the university hosted anti-gay conferences and that professors have made anti-gay comments.

Again, the university declined to address the controversy.

“If Jeffress’ anti-gay remarks were too extreme for Tebow, they pale in comparison to the things regularly said by representatives of Liberty University,” Right Wing Watch stated. “Perhaps it is time for Tebow to take another look at some of this ‘new information’ about Liberty.”

Huffington Post wondered if Tebow was giving hints about his position on homosexuality by making an appearance at Liberty.

“Due to Liberty University's reputation for intolerance toward the LGBT community, some might interpret the athlete's appearance as a tacit acknowledgement of similar values,” they opined. Peter LaBarbera, of Americans for Truth About Homosexuality, is urging Liberty University and Tebow to stand firm – and warned that homosexual activists cannot be appeased.

“Their goal is to marginalize and to discredit Christians,” he told American Family News. “If he cancels this appearance at Liberty University under pressure from the gay lobby, I think his credibility is going to suffer a ton.”

TOPICS: Culture/Society; Editorial; US: Virginia
KEYWORDS: christianity; christianschools; faithandfamily; gayrights; homosexualagenda; libertyu; timtebow; university Navigation: use the links below to view more comments.
first 1-20, 21-40, 41-49 next last
1 posted on 03/08/2013 5:57:59 AM PST by Kaslin
[ Post Reply | Private Reply | View Replies]
To: Kaslin
The gays are apparently emboldened by Tebow's backing out of the First Baptist gig and will now follow him around, "demanding' he back out of everything else.

He's too nice a guy to tell these nazis where they ought to go.

God may very well be testing Tebow here - is he more concerned with his (hard earned and, so far, faithful) worldly success or his Christian witness. One is often called upon to choose between the two.

They’re going to picket him no mater where he speaks, so unless Tebow takes a stand now then he might as well get out of the speaker business.

“a global assault on the legal rights of gays and lesbians”

Methinks the homosexual community ought to worry more about “the laws of Nature and of Nature’s God”...

“If he cancels this appearance at Liberty University under pressure from the gay lobby, I think his credibility is going to suffer a ton.”

This is fact. With the “true” (genuine) Christian community that believes historical Christianity, Tebow will lose ALL credibility as a devout Christian IF he bows to homosexual activists. God Bles him, but he must not waffle. If the Bible is true, then stand with it. If he thinks not, then stop claiming to be a Christian.

> Due to Liberty University’s reputation for intolerance toward the LGBT community,

Who are the intolerant ones?
If people want to practice gay sex or pretend to be a gender they were not born as, go for it.

But that isn’t enough for them.

No, they want to compel me by threat of governmental force to voice approval of their behavior, or at least to silence my disapproval of it.

Lord God, please hear our plea that we may be allowed to freely preach your gospel of grace and your standards of conduct, and please silence these meddling busybody sodomites and their enablers.

Both of those groups are beset with a variety of either biological or psychological problems that significantly shorten their lives.

Those telling them to continue that behavior must hate them.

It is those telling them to stop who have their best interests at heart.

Sodomites haven’t changed since Abraham’s time, if you recall the fracas at Lot’s home before the Lord destroyed Sodom with fire and brimstone. Satan has corrupted their mind, body and soul.

yep, if tebow doesnt make a stand for Christ and the Gospel, hes going to lose every time he speaks...or tries to speak...

Several weeks ago Tebow canceled a speaking engagement at the First Baptist Church of Dallas – citing “new information” he had received.

Actually they are agsinst the sin of homosexual as gay is a made up term to make the perversion more acceptable.

Liberty should put that in their brochures.

We go to Liberty for indoor track meets. I have yet to see anything anti-gay there. They do have a dress code for students though.
Despite the heavy-handed religious facade, the focus at Liberty seems to be having fun. There’s a heavy focus on athletics and concerts.

Tebow needs prayer.....he has done a mighty work for the Lord....but he's human, and many Biblical heroes stumbled, but they redeemed themselves.

Buck up, Tebow. It’s time to finish the race set before you. Witnesses are cheering you on. Stand for your faith.

Liberty University is ten minutes from me. I hope and pray they will never cave on sodomite issues. I admit I was not happy when they had Romney to speak at commencement two days after he said homos should be able to adopt children.

The area where I do most of my shopping is at the base of Liberty Mountain, and when school is in, there are always lots of students about. They are some of the nicest kids you’d want to meet. I remember the time I was in Walmart, and I saw a Liberty student leave her place in line to run and carry a wheelchair-bound woman’s groceries out to the lady’s car.