A bailed out General Motors expanded its small truck and SUV manufacturing in China soon after closing down similar facilities in Janesville, Wisconsin—the plant Barack Obama pledged to save and keep open for “another hundred years” in 2008.

GM has increased its manufacturing capacity in China by 55 percent since emerging from bankruptcy thanks to a $50 billion bailout from taxpayers. An important piece of that increased capacity has taken place in Changchun, Jilin Province in China. 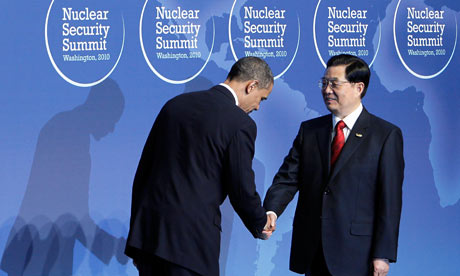 This BEGS for a commercial.....run it over and over in Wisconsin.

This is a serious issue to be discussed.

If the liberals are all in favor of the GM bailout, and in favor of keeping jobs in America, how can we justify/subsidize GM opening factories in China and closing them in America???

And, did the GM bailout directly subsidize the factory in China????

If Obama and his boys are in control of GM, how could decisions be made to have a factory in China.

From what I understand, the liberals decided that Ryan lied about Obama and that GM plant in Janesville staying open. So the liberal line is that Obama is the good guy, Ryan the bad guy.

The people of China thank their friends the American suckers, er, taxpayers for helping to reduce the cost of cars in China!

I guess the US congress can’t regulate how looted US tax dollars are used in China.

10 posted on 09/03/2012 8:53:47 AM PDT by mylife (The Roar Of The Masses Could Be Farts)
[ Post Reply | Private Reply | To 1 | View Replies]
To: kevcol
China is now the world's largest automobile market as well as the world's fastest growing automobile market. Why should GM pay a UAW premium to build cars here for the Chinese market and then ship them at added expense across the Pacific? If you sell cars in China, you should build cars in China, just as if you sell cars in the U.S., you should build cars in the U.S.

I would not want to trade our problems for China's, but at least in the short run, China has a government that is committed to economic growth, while we have a government that is committed to redistribution in the name of "fairness," higher energy costs, higher cost and lower quality health care, higher labor costs, and massively higher taxes. Maybe that will all change in November, but if I were running a global company, I doubt that Obama's America is where I would choose to invest. And if I were running the Chinese, Indian, Brazilian, Mexican, etc. governments, I would find ways to encourage Obama's reelection, because the Obama regime is a major competitive advantage for the rest of the world.

Truth is that it is just GM selling cars to Chinese.
There were no jobs stolen.
I would wager that there were American jobs created by opening this market.

It’s not like some guy in guangzhou stole some ones job on Janesville.

Um, that was the plan by GM long before the bailouts, it’s not news. GM has been actively outsourcing work since the late 1970’s. The powers to be witnessed the outsourcing to Mexico, Canada, Japan and Taiwan of the consumer products markets then, and decided to do the same, at the expense of the US markets. Unfortunately for GM, and a host of other companies, they found out that their was no market outside of the US for those products, except for the counerfeit products and stolen ideas that were literally given away to foreign competition.

13 posted on 09/03/2012 8:59:31 AM PDT by factoryrat (We are the producers, the creators. Grow it, mine it, build it.)
[ Post Reply | Private Reply | To 2 | View Replies]
To: kevcol
I am from Wisconsin and I followed the GM bankruptcy and the GM Janesville shut down very closely as it played out in 2008 and 2009. Obama, as a candidate in the Democratic Party presidential primary, campaigned in Janesville with what would be widely accepted as an implied promise to keep the plant open. It was a very old facility (operated at that location for nearly 100 years) but had been repeatedly modernized and was, up until 2007 and the economic collapse, one of the most profitable operations in the entire network of GM plants, primarily because it produced the Chevrolet Suburban and Cadillac Escalade models.

I worked my way through law school in a research position with the central Wisconsin investor-owned utility that provided power to the Janesville GM plant. It was the #1 consumer of electricity in that utility's service area at the time, so the utility was constantly being pressured to provide concessions or modify rate structures to help that plant. Every political figure in Wisconsin was extremely attentive and protective of that plant. While it was old and inefficient from the standpoint of the assembly process, it was still extremely profitable because the vehicles made there had the highest gross margins of anything GM made (something like $15K/vehicle.) That changed dramatically after the post-9/11 light truck tax credits expired and as the economy deteriorated in the 2nd half of 2006. When Obama campaigned there in February of 2008 it was clear that the plant's future was in doubt. He was throwing red meat to the UAW in the audience when he indicated that he would help to keep it open.

The CEO's of the big 3 automakers made their famous trek to Washington in September of 2008, in the middle of the presidential campaign, and shortly after the meltdown of Lehman Brothers. Their implicit threat was that at least GM and Chrysler would have to file Chapter 11 by the end of 2008 if they did not get some assistance.

The terrible mistake was indeed made was made by the Bush Administration, when it released $17.8B in TARP funds to GM and Chrysler in mid-December of 2008, to prevent Chapter 11 filings which would otherwise have happened on 12/31/2008. President Bush released a statement at the time the funds were disbursed declaring that he didn't want the incoming President to take office with 2 bankrupt automakers on his plate at inauguration.

What Bush should have done was insist that they file Chapter 11 first, then advance the $17.8B to help them during reorganization (as DIP financing.) What he did by kicking the decision into the next year and the next administration was to give the Obama administration the ability to bend the bankruptcy process to favor the UAW and disadvantage the white collar workers, white collar retirees, and dealers at GM and Chrysler.

Anyone with knowledge of bankruptcy law would admit that the Chrysler and GM bankruptcies were extreme examples of political interference and manipulation. If Obama had wanted to maintain the GM plant at Janesville, he could have done that, among the many things that were buried in the bankruptcy deal.

But he didn't, and the plant is closed and there is tremendous bitterness in the Janesville area about it. The economic downturn that hit the entire country was very pronounced in Rock County and the surrounding area, because the wage levels of the GM jobs lost were at the top of the scale.

Paul Ryan's reference to this matter was factually correct. Look at this brief article from the Wisconsin State Journal (available on the newspaper’s website Madison.com, underlining mine):

The last vehicle has rolled off the line at the Janesville General Motors plant, the oldest in the GM family.

Production of GM vehicles ended just before Christmas, cutting 1,200 jobs. But the plant remained open as about 110 employees finished an order of trucks for Isuzu Motors.

That order was completed Thursday morning. GM spokesman Christopher Lee said about 50 workers have been laid off, while the rest will remain to help guide the plant's shutdown.

It's not immediately clear what will become of the plant. GM could demolish the building and sell the land, or collaborate on developing businesses or parks.

The plant was built in 1918. It was made for tractor production and converted to a Chevrolet plant five years later.


Now the newspaper is running commentary suggesting that Ryan lied and that the plant was “closed” when the 1,200 employees were laid off in December, 2008. But they have not issued a correction, a retraction or listed this piece (above) in an errata column.

I would point out that while the GM bankruptcy petition was filed on June 1st, 2009, the pre-petition bankruptcy planning was going on for probably 6 or 7 months prior to the petition date. The Obama administration was intimately involved in that process. It's not a crime that they did not favor the Janesville plant in the prepackaged bankruptcy plan, but it is a choice that they made. And it is entirely fair to compare that choice to the comments Obama made on the campaign trails in 2008.

The Obama administration wants to campaign this year on a theme claiming that he “saved the auto industry”. To be honest, had they entered a more traditional Chapter 11 process in the twilight of the Bush administration, I can't say that Janesville would have necessarily fared any better. I can say that the Volt would never have made it into production (at a fully loaded, fully subsidized-by-the-taxpayer cost of about $250,000 per vehicle) and Vauxhall – the European GM operations that are hemorrhaging money today – would have been sold in 2009. But Obama wants to claim that the way things played out was the only way to have avoided a liquidation and total vaporization of GM and Chrysler. That's simply not true. There were many alternative scenarios that could have played out, resulting in a continued presence by GM and Chrysler.

With the Obama Administration dialing in the winners and losers in the GM prepackaged bankruptcy they have to take responsibility for the way they did nothing for GM Janesville. “Truth is that it is just GM selling cars to Chinese.
There were no jobs stolen.
I would wager that there were American jobs created by opening this market.
It’s not like some guy in guangzhou stole some ones job on Janesville.”

Actually, all the US automakers have been moving their production out of this country for a number of years. While I abhor the bailout ( they should have been allowed to go bankrupt) it appears that the management, after years of kicking the union can down the road, realized that the can couldn’t be kicked any further.
Even Ford, who narrowly avoided being bailed out, has told everyone that they have built their last plant in the US.
The UAW is a dying organization, and they have succeeded in “killing” themselves with their insatiable greed.

GM can make more money in China than it can here. Maybe it’s because of the labor unions,lawsuit abuse, taxation, and environmental fanaticism that exist in the USA but not in China.

Thanks for posting that info.

No cars made in china are sold here.