Riding a wave of momentum from his trio of victories on Tuesday Rick Santorum has opened up a wide lead in PPP's newest national poll. He's at 38% to 23% for Mitt Romney, 17% for Newt Gingrich, and 13% for Ron Paul.

Part of the reason for Santorum's surge is his own high level of popularity. 64% of voters see him favorably to only 22% with a negative one. But the other, and maybe more important, reason is that Republicans are significantly souring on both Romney and Gingrich. Romney's favorability is barely above water at 44/43, representing a 23 point net decline from our December national poll when he was +24 (55/31). Gingrich has fallen even further. A 44% plurality of GOP voters now hold a negative opinion of him to only 42% with a positive one. That's a 34 point drop from 2 months ago when he was at +32 (60/28).

What's truly astonishing is none of these guys that I can tell (except Paul, who's rightly called a "moonbat" for other reasons) are talking about CUTTING GOVERNMENT even though we are on the precipice of this multi-trillion-dollar debt abyss.

How is this possible? We MUST have tax cuts. But they cannot be sustained without MAJOR CUTS IN GOVERNMENT starting with CUTTING ENORMOUS WASTE, USELESS CABINET DEPARTMENTS (most of them), and A LOT OF "ENTITLEMENT PROGRAMS" (NOT defense, a legitimate government activity, even though our whole defense and intelligence capabilities need an overhaul because of 25 years of mismanagement since Reagan).

Santorum’s “balanced-budget” demand is of course suicide because the Leftists will use it as an excuse to raise taxes, the opposite of what needs to happen. There must be pressure to cut taxes and spending and that isn’t done with a balanced budget amendment but with sound fiscal policy. A balanced budget amendment is a bad idea because it doesn’t address our most critical political and economic problem: big government. It simply shifts the burden of the government’s budget mismanagement problem onto the backs of the American people.

Santorum offers a “balanced budget” instead of less government. That’s a terrible choice. How can we not have one guy with his head screwed on straight talking about this stuff? Maybe we really are in the Final Days and God is starting to allow things accordingly. 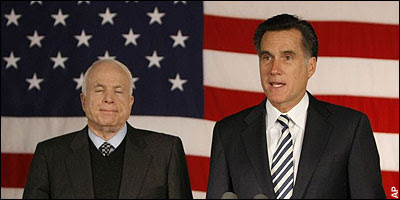 Do you think the adoring McCain drives by Romney's mansion past midnight wearing night-vision goggles?

I have felt all along that the general will be decided by the economy. If the economy turns around, no one would beat Obama anyway. If on the other hand things stay bad.... then even your dad could win :P

Newt only has himself to blame. He’s made some huge mistakes in his past that his opponents are correct to use against him. I still like Newt, but his past affairs and working with liberals is a valid concern. He has proven to be very opportunistic. I think in the end with we need to stop Romney and in doing so end up with a candidate who can beat Obama.

He’s not even that good of a conservative, except on a few issues, where he’s very conservative. He’s a social conservative big government big union guy.

His goody two shoes image is a sham. He’s campaigned as nasty as anyone and he’s simply been ignored due to his perceived weakness. He’s benefitted from being ignored. That will change.

If Newt drops out, what’s left after Romney trashes him?
Santorum is a loser. Sorry, but he simply is.
If there’s a Gingrich/Santorum plan out there, they might be able to knock Romney out at the convention.
But 2-3 weeks from now, Santorum is going to be in a very different place. We must hope that he and Newt together have poll numbers higher than Romney’s.

Same here. I want Newt to win, but if Rick's momentum carries him to the front Saturday, then Newt needs to throw his weight behind the last credible Conservative in the race. rObomney-ism must be stopped.

Sadly, the poor turnout for the primaries confirm that you're hardly the only one sharing this opinion.


For all the rah rah about Gingrich a few weeks ago, this polling shows why he would never win against Obama, if he were nominated. Gingrich's load of baggage comes with a load of negatives. And the numbers above are from the GOP side; they would be even worse among Dems and Independents.

Additionally, Gingrich showed in FL that he could be vunerable even in debates.

I never would have a year ago that Santorum would turn out to be the best of the bunch remaining at this stage.

A brokered convention might be interesting, but I fear the Party of Stupid would live up to their name and nominate Jeb. That would be certain defeat. Any Bush would be even more unpopular than the current cast of contenders -- including Obama.

I’m for Newt, but fair is fair. Let’s just get rid of SnippyMcMittCare! Then the obamunist...I’ll buy you drink afterwards and we can laugh about it all.

I would think the main goal is to stop Obama.. if it’s Romney then it’s Romney and no matter how much conservatives may hate him and how pathetic the Republican candidates are, Obama is far worse.

I’m more worried about retaining the House and taking back the Senate.

I think they both need to stay in whil Romney continues his game of whack a mole. If Newt drops out and Santorum falls, Mitt wins. If one of them drops out, I prefer they wait until New York and California.

Actually, Rick’s 06 campaign was full of his own evil. He swerved WAY LEFT to try and make folks think that Rickie could “be a good little moderate and liberal too.”

I noticed Newt and also Chuck Norris are starting to hit that theme softly this week. Might be too late, but they have finally woken up.

The elite must be defeated, then we can unify as conservatives and march on the damned socialists.

The problem with Gingrich as a VP is that he would try to insert himself.

The President would be forced to assign him to typical VP duties — greeting ambassadors and attending state funerals, and Gingrich would abhor such a roll.

Gingrich as VP would not work and not be in the best interest of the President.

Seems like a lot of folks staying home already...

Same here. Romney is the lighter side of Obama. I will not vote for ANY side of that Marxist.

Coulter already on Fox and Friend dissing Santorum.....Must have gotten a three AM call to action.