Navigation: use the links below to view more comments.
first previous 1-20, 21-40, 41 next last
To: YellowRoseofTx

“A friend of mine in Midland/Odessa is a nurse and nursing instructor at the college....e-mailed me that you wouldn’t believe the number of 10yr. and 11yr. old illegals that are giving birth, impregnated by their grandfathers.”

And make it retroactive for the last 17 years.

22 posted on 08/12/2010 9:52:31 AM PDT by SgtHooper
[ Post Reply | Private Reply | To 1 | View Replies]
To: nmh
"Meanwhile, nearly half of respondents in a new poll support a Constitutional amendment ending automatic birthright citizenship"

Of course! And there is not a chance in hell of it ever happening. But it'll sure pull some steam out of the enforcement momentum.

Yep. I am all in favor of SHOOTING ALL who would attempt to come in illegally.

I’m very much against illegal immigrants being in this Country and soaking up the wealth that that should be going to sincere citizens. It is especially dispicable that these people would have children just to enhance their take of the Nation’s wealth.
Having admitted the above , I have strong reservations against killing to prevent crossing the border; though criminal acts such as drug dealing is probably necessary. My thoughts go back to the days of the Berlin Wall. The Soviets(& all the guards) were shooting people who attempted to go over the wall from east to west. These were persons wanting the better life in West Berlin. I see the problem there as very much like our border situation. They shot people wanting out while we think of shooting people coming in. Either is a tragic situation blameable on the governments that care less about welfare of humans than alleviating conditions which would stop such situations.

In the story they quoted the head of a Texas border hospital who said "70% of the babies born here are to illegal mothers".

26 posted on 08/12/2010 11:35:10 AM PDT by Deb (Beat him, strip him and bring him to my tent!)
[ Post Reply | Private Reply | To 1 | View Replies]
To: noinfringers
I'm going to say that [people desiring to 'get out'] is almost irrelevant... "playing nice" and coddling them has had only deleterious effects; furthermore instead of encouraging people from using the ports-of-entry all our weak stance does is encourage the rest of the body of US law; I believe that the violent crime rates in the so-called sanctuary cities support that claim.

But let me ask this: why is it a-ok for "undocumented guest workers" to spit in the face of federal laws but woe unto those Citizens who would assert that the government *can't* legitimately do anything it wants to. As an example, and I realize I'm changing the scope a bit (but the general principal remains), my State's Constitution flatly forbids any law "abridg[ing] the right of the citizen to keep and bear arms for security and defense [...]" yet there is a State Statute which prohibits firearms on university campuses. {Similarly the city/county/state courthouses post big "no weapons" signs.}

Any time I ask a public official about this contradiction I get the run-around... and often law-enforcement types will cite the prohibitions in Courthouses as an "accepted exception;" but if there are exceptions to the supreme law of the land, and the state *CAN* do what is flatly forbidden, then you and I have no recourse or protection under [any/the] Constitution *OR* the law.

8% of all births is a pretty big chunk. And if this is true, leftists have a promising future when they start voting, assuming that most of those votes will go to Dems or worse.

and they teach them Spanish.,.a lot...for the many illegal alien kids who escaped the “pomgroms” of Georgia..

My grands are more fluent in counting in Spanish than English...

my going into 1st grader can rattle off uno through veinte and read the words with ease but cant find 13, 14, 15 in English...

OBAMA WAS DESPERATE FOR DEM CORZINE TO WIN W/ ILLEGAL VOTES--- Obama put the power of the WH machine behind Corzine.

The NY Times reported :
(a) every TV ad Corzine put on the air was being screened by Obama's WH team.
(b) Corzine's aides gave the WH daily briefings.
(c) Obama’s pollsters took over for Corzine’s polling team, and,
(d) White House operatives were on the ground for internal strategy sessions,

>> Incumbent Dem Jon Corzine (the wealthy loser) outspent the Repub winner Chris Chirstie about 4-1.
>> New Jersey has a huge Democratic registration.
>> Corzine bragged he had 20,000 paid union helpers on the ground election day to get out the vote.
>> There was a third party candidate siphoning off Republican votes.
>> Corzine had the power of incumbency.
>> Corzine had the power of a crooked Democrat Machine cooking the vote.
>> Ohaha hid $17.5 BILLION stimlulus in New Jersey.....for Corzine's reelection campaign.

NORTH BERGEN, NJ -- July 21, 2006 -- Pelcastre brothers, Angel and Jorge, Dallas, Texas, were a walking threat to US national security, expert document forgers who, for a few thousand dollars, could give anyone a new identity, authorities said. The Texas brothers turned a NJ hotel room into a business office and were readying a massive cache of fake Social Security cards for delivery to a local NJ identity broker.

The Texas brothers were a "one-stop shop" for a myriad of fake US documents, including birth certificates, Social Security cards, driver's licenses for any state in the US, passports and resident alien cards, said state police. Officers happened upon two cars bearing Texas plates in a NJ hotel parking lot. Authorities wouldn't identify the NJ hotel by name for fear it would spark retribution. The Drug Interdiction Task Force, regularly runs checks.

All told, the haul was worth about $500,000 on the street. Police also recovered $6,000 in cash, which was the first payment from a NJ fake document broker for a shipment of 500 Social Security cards.

AND THIS The winning Republican Lt Governor candidate, former County Sheriff Kim Guadagno, had applied for the federal 287(g) program, which sought to question every inmate coming to the County jail about his/her immigration status, regardless of the offense. Then-Sheriff Guadagno said she wanted to ensure that "illegal criminals" were not unduly released for fear of further harm to the community. The 287(g) program would provide the Sheriff with personnel and tools to punish individuals being held at the County jail (even if they do not meet the criteria set forth by Corzine's sucking up to illegals). Illegals lacerated Sheriff Guadagno for political pandering and for scouting incidents of indictable offenses such as driving under the influence by undocumented immigrants. She won state office, anyway.

There are many more than this. They just haven’t been caught yet.

Interesting, where do you get all this info?

I don't see how amnesty would have produced voters in time for any elections in the next 5 years. They may dream of voting rights with amnesty, but I don't think that is going to happen.

But the plan to get millions of voters via anchor babies, chain migration, open borders, and what they think is eventual inevitable amnesty, may be more dangerous 10 years from now.

I believe that was Parkland Hospital in Dallas Texas...Where illegals are giving birth to approximately 900 babies each and every month at that one hospital.

I meant to say "They may dream of instant voting rights with amnesty, but I don't think that is going to happen."

THE FLY IN THE OINTMENT Third World reconquista types, an integral part of this plan, are chomping at the bit....eager to begin the takeover. Overt actions by this crowd will queer the Dems plans. 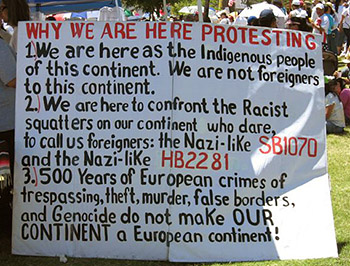 I’m pretty sure the guy quoted was head of a hospital closer to the border. Kinda hard to waddle all the way to Dallas after your water breaks. And I know Parkland, I would have recognized it.

Across Texas, 60,000 babies of noncitizens get U.S. birthright

While members of Congress argue about ways to prevent these infants from automatically becoming U.S. citizens, the staff at Parkland Memorial Hospital is doing what it always does: delivering babies.

Parkland handled 11,071 births last year to women who could not provide proof of U.S. citizenship – or 74 percent of the total 14,872 births at the hospital. Most of these women are believed to be in the country illegally.

It was the busiest hospital in the state for such births.