Now that the crisis has passed with the Maersk Alabama and Captain Richard Phillips, along with three of the four pirates holding him, we need to determine how to avoid this in the future.  Fred Iklé has a couple of common-sense suggestions in the Washington Post today, mostly by returning to traditional methods of exterminating piracy:

So why do we keep rewarding Somali pirates? How is this march of folly possible?

Start by blaming the timorous lawyers who advise the governments attempting to cope with the pirates such as those who had been engaged in a standoff with U.S. hostage negotiators in recent days. These lawyers misinterpret the Law of the Sea Treaty and the Geneva Conventions and fail to apply the powerful international laws that exist against piracy. The right of self-defense — a principle of international law — justifies killing pirates as they try to board a ship.

Nonetheless, entire crews are unarmed on the ships that sail through the Red Sea and the Gulf of Aden. Shipowners pretend that they cannot trust their crews with weapons, but the facts don’t add up.

We’ve heard a number of excuses over the past couple of weeks for why crews have no access to weapons when traveling through the Gulf of Aden and other dangerous waters.  Some ships have access to non-lethal weapons, such as sonic guns, designed to create tremendous pain so that pirates can’t get aboard the ship in the first place.  Once boarded, however, crews are unarmed and at the mercy of the pirates, a completely unacceptable choice given the wide knowledge of the existence of piracy.  If the crew members themselves aren’t qualified to carry weapons — and there’s no reason they can’t be qualified — the shipping companies should hire security forces for ships passing by the Horn of Africa.

Iklé has another good suggestion:

The international right of self-defense would also justify an inspection and quarantine regime off the coast of Somalia to seize and destroy all vessels that are found to be engaged in piracy.

This should actually be the next mission for the US Navy after freeing Phillips.  We don’t need a quarantine and inspection to identify some of the boats and ports in question; I’d bet dollars to donuts we’ve already identified most of them.  Our next step after killing the pirates on the lifeboat is torpedoing their ships in their home ports without inspections or even warnings.  Somalia’s failed state can’t impose order on these areas, but if the pirates become a liability rather than an asset to these facilities, they’ll get the heave-ho soon enough.

In the future, we don’t need the lawyers and the FBI negotiators, and we especially don’t need to legitimize Somali “elders”, either.  Iklé has that right; piracy is not a bank robbery.  The entire point of piracy is to capture ships in territory where no nation can claim sovereignty and therefore work outside the civil law.  The proper response to that is military, not some notion of cops and robbers.  When pirates find out we’re serious, and when enough of them wind up at the bottom of the ocean, they’ll think twice about seizing American or Western shipping.

TOPICS: Editorial; Foreign Affairs; Government; News/Current Events
KEYWORDS: bho44; maritime; military; navy; obama; piracy; pirates; rescue; somali; somalia; somaliapirates; somalipirates Navigation: use the links below to view more comments.
first 1-20, 21-40, 41-60, 61-75 next last
Our next step after killing the pirates on the lifeboat is torpedoing their ships in their home ports without inspections or even warnings.  Somalia’s failed state can’t impose order on these areas, but if the pirates become a liability rather than an asset to these facilities, they’ll get the heave-ho soon enough.
1 posted on 04/13/2009 1:18:24 PM PDT by Delacon
[ Post Reply | Private Reply | View Replies]
To: Delacon

How do we stop piracy?

This is how it has always been done.

Same way we did it before

No magic required, just poof they are gone.

Just give us some time to blow the men down.

Sorry..., no more *bailouts* by the American taxpayer, in order to “do the bidding” of these other shipping companies and the other countries that they come from — just because *they* are the ones who have been paying the ransoms for years...

The American taxpayer should have *absolutely nothing* to do with these “foreign bailouts* — for a problem created by these same “foreign interests”.... 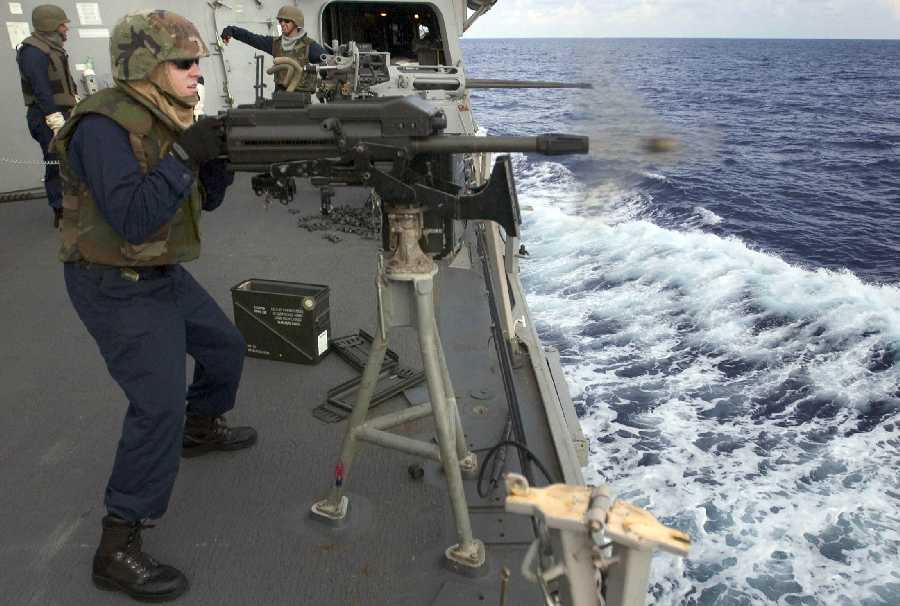 Here’s what I posted elsewhere..., it’s obvious that something is seriously wrong here, with these shipping companies...

I’ll tell you right now — there’s something *seriously wrong* with this story and how things developed!!

And here’s where the problem is...

“We’ve been under attack for a week before they got on this ship,” Murphy said.

That tells me that something is really wrong in the “shipping world”. I mean, it takes a week before they decide to “do something” about these pirates who are trying to take over the ship?

If that had been done *right* by this crew and the shipping company, it would have never progressed to the point that it did.

These shipping companies better get their act together...

12 posted on 04/13/2009 1:23:56 PM PDT by rockabyebaby (We are soooooooooooooooooooooooo screwed!)
[ Post Reply | Private Reply | To 1 | View Replies]
To: Delacon
If it were me...and it's not, I would circle about 25 or 30 predator's around that area of the ocean and launch hellfire missiles until the terrorist pirate types called “Calf Rope”.

I mean really, it can't be that difficult to sink small craft that are approaching shipping lanes.

This is how it has always been done.

But we are in the “Obama Age”.

We can't do that.

We only kill the unborn and elderly that can't speak for themselves. Nah, we need to “understand” them and repent to them.

(yes folks that object exiting the barrel is not a bullet of incredible girth but indeed is an actual grenade, on it’s way to ruin a pirate’s day.)

Yes. Kill the pirates and sink their boats. Yet the current talk seems to be that we should put them on welfare and give them a coast guard.

Good grief. As Ed Morrisey points out, this is a failed state. There is NO faction capable of keeping order. You can take your choice among pirates, fanatics, and corrupt warlords. No thanks, I say none of the above.

What we need to do is sink all their boats and let them deal with their own mess, but without being in a position to export their problems to others. Why all this concern for the tender feelings of Somalis? They are some of the most cruel and dysfunctional people in the world.

And that is the only way it CAN be done.

Which means ultimately “we” will probably end up trying to “talk” with them about the “problems” “we” have caused them in the past and how “we” can “help” them stop WANTING to be pirates; or some other kind of far-left, wacko, appeasement-artist, new-age philosophy, all talk and no action BS.

And then we’ll all sing kumbaya with our “former enemies” around environmentally neutral artificial camp fires on the Whitehouse lawn... ...as they lick their proverbial chops and prepare for the next attack.

Note how this is a *set-up* by Obama in order to approve some “adventurism” in order to get his “Commander in Chief” tags ordered.... LOL...

Comments from another thread...

Stupid is a big problem.

I sayin’ we need to bone up to another level of undersanding of this drama, there’s more going on.

Some of us sheep need to stand on our hind feet and look over the fence.

You said — We’re being herded by yappin’ sheep dogs.

And you definitely could be right. We could be — being herded into getting “outraged” about the pirates so that Obama could send in our troops over there and engage in some foreign and adventurist conflict, to boost his “Commander in Chief” credentials. And on top of that, there are FReepers who would “buy into that thing” — about raiding those pirates... (not realizing they are being “herded” to that conclusion...).

Obama wants to create *another bailout* for foreign countries who have created this pirate problem, themselves, by paying ransoms over the years...

No more *bailouts* for the weenies who created this problem in the first place. If those other nations who have been paying ransoms for years — want to take care of the problem let *them* do it...

The U.S. has no business solving all those other nations’ problems (along with their shipping companies) — and standing there with their “hands out” asking for a “bailout” from the U.S. while our military does all the “heavy lifting” — “for free”... no less....

No way — no more *bailouts* and especially not for other countries...

AND YES..., let’s stop being the kind of FReepers who can be “herded” into a yelling mob to “take care of those pirates” (and who will walk right into Obama’s trap...).