On the back of yesterday's China Daily, the English language newspaper in Beijing, the face of Liu Xiang filled a broadsheet page. But the tears had been airbrushed out, so to speak.

China's Olympic pin-up was selling the Nike brand and his country. He is the face of Nike in China, and of China across the globe. He didn't develop an ankle spur, injure his Achilles or damage his hamstring on the way to the blocks in the heats of the 110m hurdles. He was sent to his Olympic death by a regime that knew his injuries were terminal.

We should not be surprised. The episode illustrates the game China is in. The Olympics in Beijing are an exercise in impression management, a £1 billion-plus ad. Appearances are everything.

It was not Xiang who was competing but China itself. China could not be seen to be weak, impaired or flawed. Having spent seven years and ten figures reworking its public image, China could not afford to be without the central figure around which the narrative is spun, the man who has come to embody the new China.

China's Liu Xiang retires from the first round of the men's 110m hurdles at the ‘Bird's Nest’ National Stadium during the 2008 Beijing Olympic Games. (Adrian Dennis/AFP/Getty Images)

The withdrawal of China’s most popular and most hyped athlete, 110 meter hurdles champion Liu Xiang, is raising many questions in the Chinese community whether or not Liu’s injury was known before race day, and whether or not his withdrawal moments before the event was a well-planned maneuver to sell tickets and focus the interest of the Chinese community on the Olympics.

Many Chinese analysts suspect that the most likely cause of Liu’s breakdown is a combination of the enormous pressure placed on him by the Chinese regime to win the gold and the enormous mental pressure of his sponsorship contracts and fame.

Last year in a press conference, Liu’s coach Sun Haiping said, “Leaders told us that, if Liu Xiang could not win the gold medal in Beijing, all of his achievements before will be meaningless.”

After winning the gold in the 2004 Athens Games, Liu’s face was plastered all over China in commercials and numerous corporate sponsorships such as Nike, Coca-Cola, Visa, Cadillac and Lenovo. In the Chinese sports circle, Liu’s fame can only be contested by NBA star Yao Ming.

In an interview with the UK’s Telegraph, Liu’s former coach Gu Baogang revealed that Liu had been injured during training as late as July.

“He never had any injuries before he hurt his foot in June,” Gu said. “But that injury was not too bad. After the Bird's Nest was finished, he trained in the stadium in July and hurt his foot again.”

Gu also commented on the pressure Liu was facing. “Liu Xiang has no freedom in China…He is respected and loved, but he leads a really boring life and cannot go out much,” Gu said.

“He feels more relaxed when he races outside China. It would be better if he was in an environment that is more like a foreign country, with less attention.

“He is the only competitive athlete in China's track and field team so he has been under constant pressure, including from the high hopes of government officials.”

According to a Chinese internet forum, a poster under the alias “NIKEinsider” states that injuries weren’t the only thing burdening Liu. The insider gave a detailed account of how Liu Xiang had been preoccupied with sponsorship activities and advertising opportunities one after another, and thus had little time for intensive training.

It continued to say that this led to Liu’s physical condition no longer meeting high-level competitive standards, and that plans were made to have Liu quit the race to save both his own face, and that of his sponsors.

According to reports, Liu Xiang was not at the Opening Ceremony so he could save his strength and energy. Chinese media reported that he did not join the Olympic Village until Aug. 16, and it wasn’t until Aug. 17 that Liu began to appear inside the National Stadium.

This news led several other Chinese internet posters to raise questions about possible behind-the-scenes control of the situation by the Chinese Communist Party. “Liu Xiang has the ability to attend the competition. If he has to quit, it should have been announced beforehand. They should not wait until the competition had started. This is not Liu Xiang’s fault. He indeed has injuries. But everything can be announced earlier,” said one poster.

“Why was there no announcement and instead, there was so much promotional effort to hype it up? Did they do this to sell more tickets?” they asked.

China’s 90,000 seat National Stadium, also known as the “Bird’s Nest,” was running at over 90 percent capacity for the 110 meter hurdles preliminary heat. When Liu Xiang had to withdraw from the race, more than 60 percent of that audience left immediately, showing obvious signs of disappointment and tears.

Sponsors certainly had a lot invested in Liu Xiang’s performance. Ding Bangqing, deputy Chairman of the Board for the Guangdong Advertising Company told Dongnan Newsflash newspaper, “Liu Xiang’s withdrawal will definitely negatively impact the profit and operation of the sponsor companies. Since the pricing of Liu Xiang’s advertisement is at least 10 million yuan, and considering that many companies use Liu in the advertisement, I personally think the loss of Liu this time will be over 100 million yuan, while for those sponsors, the losses will be over 3 billion yuan.”

As of August 18, there have been reports that both a Lenovo ad featuring Liu and a Visa ad referring to Liu’s world record which he won in Switzerland 2006 that says “Refresh the Dream, 12.88 seconds,” have been cancelled.

That guy had guts to be even out there in that much pain....

4 posted on 08/21/2008 12:12:28 AM PDT by BurbankKarl
[ Post Reply | Private Reply | To 3 | View Replies]
To: TigerLikesRooster
"Last year in a press conference, Liu’s coach Sun Haiping said, “Leaders told us that, if Liu Xiang could not win the gold medal in Beijing, all of his achievements before will be meaningless.”"

In the end he’s just another slave, his worth in life determined by how much he can make his masters look good.

“He feels more relaxed when he races outside China. It would be better if he was in an environment that is more like a foreign country, with less attention>>>>>>>>>>>>>

Well, I hope Liu Xiang recovers and comes to the USA to compete. Sounds like he is ready to enjoy the emouluments of Freedom.

My heart goes out to this hurting sole , I mean soul! ( LOL)

Seriously. This shows us that without Freedom, we are nothing

The kid would likely make a great American.A lot better than those sneaking across our southern borders with no desire to become Free or be American, or even to learn English.

Communism is nothing but human enslavement. The chinese olympics has been a total farce, besides the competitors themselves. I don’t blame them. Just like I don’t blame those 13 year old female gymnists. They have no say in the matter. Who I blame is their government and the ever corrupt IOC for allowing these games in the first place in that totalitarian POS run country.
The IOC and China tried to promote these games as Chinas coming out party to the world. All it ended up being was Chinas attempt to put an expensive orchestrated show for its own people. And most of the people as we’ve learned, were not even allowed to attend.

True. Even Yao Ming has to give half of all his NBA pay and any money he makes from sponsorships to the Chinese government.

11 posted on 08/21/2008 12:35:04 AM PDT by Proud_USA_Republican (We're going to take things away from you on behalf of the common good. - Hillary Clinton)
[ Post Reply | Private Reply | To 8 | View Replies]
To: TigerLikesRooster
"the “Bird’s Nest,” was running at over 90 percent capacity for the 110 meter hurdles preliminary heat. When Liu Xiang had to withdraw from the race,"

It was a stupid prelim race.

Yet the TV production was a 20 minute PR scam.

First there was the lead up to the race. He was hurt. It was his achilles tendon. Get it? Achilles?

Then the kid walks off the track and "out of the stadium." The announcers were like reading a script. The camera followed him (alone) all the way to the tunnel and outside where he was tended to by, da da, one guy. Right, the kid gets 5 million yawns/yr endorsements and one guy around the corner helps him out.

That's not bad enough. Because I saw this like after midnight. So the next day there is a repeat of the whole thing, but with added footage.

They show the guy inside the warmup room, stretching, grimacing. Oh, he is so hurting. Not. It was choreographed. The ChiCom propaganda stooge is so frustrated he walks over to a padded wall and kicks it. He feels his tendon. He kicks the wall again. This is all before the race. He is the only athlete in the room, putting on a show for the cameras so it can be broadcast after he fakes an attempt at racing.

The whole TV production was an act.

Course NBC has to go along with all this Commie propaganda because the ChiComs let them pay about a billion for the rights. Everything on TV has been dictated by the ChiComs, from lip-synced anthems, computer animations for live fireworks, to gymnastic scoring, to track athlete withdrawal propagandist productions.

Isnt that the same as paying taxes to our Govt in America?

Everything about that country is fake. Everything is a controled production to prop up communism. From its movies, to its faux-capitalism, to is milli-vinilli olympic games, to its xenophobic society.
It all comes down to communism. Reagan knew how evil it was and what a threat it was to man kind. If anything, this farce of an olympics is just a great reminder of how evil it is.

Yao still has to pay american taxes on his earnings in the US, after the Chinese still take their 50%. Talk about screwed.

Well May/Welsh winning their 2nd Gold and winning the last game against China did not seem propaganda ish.

It did seem odd that almost event came down to USA vs. China.

Except the BMX bike racers. : )

Yes, everything about China is fake, but that is a flaw that stretches far beyond communism. Everything about Confucianism is fake, so China has been a country where lies has been the norm for to thousand years.

Really, that is the essence of the whole “face” concept that they embrace in China, “face” is all about a false front, it’s about one side pretending fake respectability while the other side pretends to pay fake respect. Everything about the Chinese culture is fake.

Good picture!
That brings back one of my all time favorite Olympic moments.
That year’s women’s gymnastics gold and the Torville/Dean skate are unforgettable for me. And, of course, Eddie the Eagle...

First, it was his right thigh.

Next, it was his right heel. 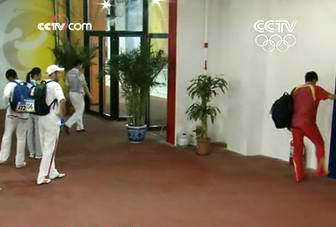 He was kicking a shutter(or steel door) with his right foot, which should hurt.

Then, it was his left thigh.

Lastly, it was his left heel.

So which one was hurting really?