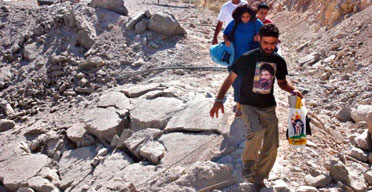 A Lebanese man wearing a T-shirt with a picture of Hezbollah leader Sheik Hassan Nasrallah, walks past a bomb crater in the eastern Bekaa valley. Photograph: Samer Husseini/AP

"Any Hizbullah in the town?" I asked the Lebanese soldier who had hitched a lift outside this mixed Christian and Shia area just five miles north of the Israeli border. "A few," he replied, as his right eye creased into a cheerful wink. We dropped him in Marjaayoun's cobbled main square, where three other soldiers in the green camouflage of the Lebanese army were leaning against a wall in the shade. Nearby, outside a shuttered cafe in the otherwise deserted hub of what was obviously once an attractive hillside town, four men were chatting.

Two sported beards and wore black trousers and military-style boots. The younger and tougher-looking man had a walkie-talkie on his belt. His dark and calloused hands were stained with grease and oil. After inquiring who we were, they revealed they were indeed some of our soldier's "few". It was also obvious that the two groups, Hizbullah and the army, had a comfortable relationship, each with its own mission to perform, untroubled by the presence of the other. In Washington, Jerusalem and London there is much talk of the need to get the Lebanese army to move into southern Lebanon and disarm Hizbullah. On the ground there is little to suggest any antagonism. It looks more like mutual sympathy. The notion that the army could forcibly remove Hizbullah's weapons seems fanciful.

Thanks for that very interesting read.