"The Iranian nation will wipe the strain of regret on the foreheads of those who want to bring about injustice", President Ahmadinejad scorned at a recent rally in the province of Zanjan. Iran "will cut off the hands of any aggressor", any attack would be met with a response that is double-fold including suicide attacks across Europe and the United States, he warned. "Israel should be wiped off the map", the predominately Jewish nation "cannot survive" and is headed "towards extinction" quipped the fanatical President.

If one were to listen to his rhetoric alone, even the most astute political intellectuals would think Iran is a nation equipped with the most dangerous military arsenal capable of challenging any nation.

But Iran's rhetoric has little to do with their outdated and dismal military, their fledging economy or their detested government. The root of the government's fiery tone may be traced to their Shi'te ideology’s messianic belief in a mysterious, mystical twelfth imam who ventured into hiding over a thousand years ago.

The Hidden Imam is a central concept in the teachings of Shi'te Islam. Born Muhammad al-Mahdi he ventured into a cave in 941 AD hidden by a gate called the Gate of Occultation.

The doctrine of Occultation professes Allah aided the cloaking of the Imam away from the eyes of man so that he could be kept alive until his return. Shi'tes believe that the Twelfth Imam will return to lead the religious battle between good and evil when the world has become consummately nefarious.

According to Shi'te orthodoxy humans may not force or hasten the return of the Imam, but the Hojjateiehs a group of which Ahmadinejad is a member, opine that humans may stir up chaos to encourage his return. With his recent rhetoric vowing for the destruction of Israel, demanding deportation of the Jews to Europe and denying the Holocaust that the President seems to be doing just that. In fact, his messianic axiom of the Twelfth Imam and the subsequent suppression of the forces of evil [modern day US, UK, Israel and many other nations] is central to Ahmadinejad's foreign policy.

The Iranian government's official policy has undercut efforts of the international community by rejecting a United Nations deadline to suspend Iran's nuclear program, threatening to quit the Non-Proliferation Treaty and vying that "nothing can stop Iran's path to nuclear technology." In anticipation of a stand off with the West Iran recently clinched agreements with eight different Middle East insurgency groups to carry out suicide attacks against Israeli, British and US interests across the world. Ironically this plan is called 'Judgment Day.'

During a private meeting with an Iranian cleric in November Ahmadinejad claimed that while giving a speech before the United Nations he felt "the atmosphere change and for 27 to 28 minutes the leaders did not blink -- they were astonished.. it had opened their eyes and ears to the Islamic Republic." He further said that he felt the hand of God upon him as he delivered his omniscient speech. In his egocentric fantasy world the Iranian President likely sees himself as a deputy of the Imam with a divine mission to encourage his arrival. His references to the Imam in conjunction with threats to wipe countries off the face of earth should be taken seriously.

Foreign policy experts should examine the Islamic Republic from both a political and religious perspective. To the clerical regime the return of the Imam is not a mere possibility, but a surety. Their attitude towards the international community seems to point at their preparation for that day.

International concerns aside, there are domestic reasons for the regimes erratic behavior. After 27 years of executions, floggings, stoning, oppression of political dissent, violation of women's rights, oppression of religious minorities, the largest brain drain in the world, rampant prostitution, crime, drug use and mass unemployment the Islamic Republic is domestically quite loathed. In fact, recent student polls show that close to eighty five percent of the population supports fundamental democratic changes in the regime.

Iranian students have consistently poured into the streets in pro-Democracy protests only to be violently suppressed, jailed, tortured and often murdered. But, dictatorships can only oppress for so long and it's only a matter of time before Iran explodes in a pro-Western democratic revolution. The regime knows that the only way they can leave any kind of legacy is by invoking nationalistic pride by pushing the country into another war and unlike the Iran-Iraq war this time they're paving the way for the return of the Twelfth Imam.

Ahamadinejad and Company's Armageddon may be coming to a theater near you and it's probably the scariest movie we'll ever see unless we aggressively invest in the overthrow of the regime before it's debut appearance.

About the author: Slater Bakhtavar is an Iranian-American attorney working on post-doctorate in Transnational Business Law, and involved in foreign policy analysis

I bet my Baptist Pastor could kick his Hidden Imam's butt!

Ahmadenijad is but a puppet that reflects the true power in Iran which is the theocracy. He is the mouth piece of the Mullahs whom are the true power.

islam. Thank whoever made it up for the greatest lie to ever live in world history.

And Armageddon tired of him! Enough already.

We all must do everything possible to expose the Imam and the Hidden Mahdi to the media....

What if they gave an apocalypse and nobody came?

Stinky is a real whack job.

9 posted on 05/28/2006 10:11:29 PM PDT by Mike Darancette (Proud soldier in the American Army of Occupation..)
[ Post Reply | Private Reply | To 1 | View Replies]
To: Ranald S. MacKenzie
In a way, he's even scarier. Ahmadenijad is willing to sacrifice his entire country, and its entire populace, to advance HIS personal religion. It is tantamount to the U.S. declaring war on the entire planet, thinking Christ would return if we did so. It would constitute the greatest "gamble" the Earth had ever known.
10 posted on 05/28/2006 10:11:49 PM PDT by singfreedom ("Victory at all costs,.......for without victory there is no survival."--Churchill--that's "Winston")
[ Post Reply | Private Reply | To 1 | View Replies]
To: canadianally

We all must do everything possible to expose the Imam and the Hidden Mahdi to the media....

Gee, now that you put it that way.
Hey, we could always luck out and this guy gets bit by a rabid dog and he dies?
Judas was a lot like this, some speculate that he honestly believed that if he had Jesus arrested Jesus would reveal himself as Messiah, take up his sword against the Romans and lead the armies of Israeal into victory over thier enemies. In the President of Iran we have a man who believes he can force the hand of this 12th Iman. This is scary stuff. And NOBODY in mainstream media or much of anywhere else is talking about it other than speculating how long before they have the bomb to drop on "you know who" and what are we going to do about it.

That would be satan, they call him allah.

After the Brits finally had enough of his nonsense they sent Lord Kitchener with a small contingent of British troops to lead the Egyptian army back into the Sudan. It took a couple of years of building railroads, riverboat gunships, and training and equipping the Egyptians before the Anglo-Egyptian force actually invaded the Sudan. At the battle of Omdurman, which BTW was where Winston Churchill fought on horseback with lance and sword as a 21 year-old cavalry subaltern, the Mahdi's Dervish army of over 80,000 men was slaughtered in the tens of thousands by the far smaller British and Egyptian forces with their modern machine guns, repeating rifles, gunboats, and artillery.

The Mahdi and his still dangerous force of sheiks, chieftans, and beaten wariors fled into the desert where he planned to rebuild his strength by recruiting more Sudanese and Nile riverain tribes to his "cause". The Brits pulled most of their forces out of the country and left a few officers to lead the Egyptian army in it's search for the Mahdi and his force in the far western part of the Sudan. A year or so after the battle of Omdurman they finally caught up with him and his remaining army in a desert wilderness, and in the ensuing fight the Mahdi and most of his sheiks and chieftans were killed or captured.

I said all that to say this. The western mind doesn't or can't fully understand the extreme fanaticism of the hard core Islamics when their religious figureheads such as Mohammed and the Mahdi are involved. Ahmadenijad may well be as fanatically blind to the military capability of the real world outside Islam as the Sudanese Mahdi was over 100 years ago. The Sudanese Mahdi was convinced, and convinced his warriors, that Allah would strike down all who opposed him, and he had no conception whatsoever of the overwhelming power the Victorian British Empire could and did bring against him. My point is, if Ahmadenijad really believes that the Mahdi is ready to return to lead Islam to dominance over the western world, and that Allah will grant victory over the depraved western infidels no matter how many nuclear bombs and missiles we have, he may just do something so rash and foolish that it would lead to a deadly nuclear exchange in that part of the world or even farther if Iran does develop that capability before Ahmadenijad is either deposed by a revolution or is somehow forced by the world community to stop working on getting the bomb.

What I am trying to say is that our government should take this nutjob and the mad Mullahs lurking behind him very seriously when he talks about wiping western nations off the face of the earth. We are not dealing with sane, rational people here folks, we're dealing with Islamic fanatics who see a warriors's death in battle as a ticket to an eternal feast on sensual delights in a celestial Islamic paradise.

Finally some truth about the origins of radical Islam. Can you spell Satanic Occult.

What if someone put a J-DAM down the gullet of that Cave of Occultation? 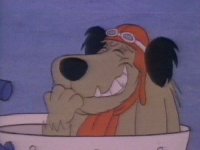