Last Sunday evening, Teresa Heinz Kerry admonished delegates to the Democratic National Convention to restore a more civil tone to American politics. Then, as soon as she was done, she hurried off the stage to scold Colin McNickle, the editorial page editor of the Pittsburgh Tribune-Review, telling him to "shove it" for quoting her correctly.(1) Marla Romash, Teresa Heinz Kerry's spokeswoman, told WTAE-TV's Scott Baker, "This was sheer frustration, aimed at a right-wing rag, that has consistently and purposely misrepresented the facts in reporting on Mrs. Kerry and her family."

John Kerry has a butler follow behind him everywhere he goes in case he needs something. Perhaps they will also hire a psychologist for the impulsive Teresa.

Either that, or her uncontrolled mouth is going to help make for a very interesting campaign season.

Teresa Heinz Kerry, is one of the richest women in the U.S. Apparently, though, her real assets are to remain a secret as she files separately from her husband and, so far, refuses to release much financial information.

Newsmax reports that Heinz Kerry paid just over $587,000 in income tax, or just 15.2 percent, on their $5,510,000 million 2003 gross income(2). [Actually, that would be 10.65%, but Newsmax reports 15.2%, which is still very low compared to many of us.] John Kerry, of course, exploits his wife's wealth for his political advantage. For instance, in 1996, she funneled nearly $2 million in a loan to her husband's close Senate reelection campaign. The last-minute cash infusion most certainly meant the difference in Kerry's narrow, 52 percent victory.(3) Then, there was something about an over inflated home loan -- that John could in no way pay back himself -- for this presidential campaign.

There are laws against these flimflam money changing games, but they don't seem to apply to Democrats.

The Kerrys have had rather extensive financial and personal ties to Enron, the infamous Ken Lay's bankrupt energy firm, documents show. Kerry and Teresa Heinz Kerry reported more than $250,000 in Enron stock ownership before the firm's 2003 collapse.

According to the Boston Herald, the Heinz family trust bought between $250,000 and $500,000 of stock in December 1995, just days before Heinz Kerry announced Lay would serve as a member of the Heinz Center philanthropy, Kerry's Senate financial disclosure documents show. Lay stayed on the board after Enron's collapse and a Heinz Foundation spokeswoman defended Lay in news reports amid the fraud accusations as having "a good reputation in the environmental community."

Then there's Teresa's propensity for financing far-left activist conspiracies. For instance, she has given the Tides Foundation $4 million to date. The Tides Foundation funds the Ruckus Society(5), that destructive group of anarchists who rioted and looted Seattle during the 1999 World Trade Organization meeting. This year, the Ruckus Society is training protesters to target the Republican Convention.(6) Philadelphia Police Commissioner John Timoney called the radical protesters what they are, "criminal conspirators":

"There's a cadre, if you will, of criminal conspirators who are about the business of planning conspiracies to go in and cause mayhem and cause property damage and cause violence in major cities in America that have large conventions and large numbers of people coming in for one reason or another."

Okay then, if the Ruckus Society is legally a group of "criminal conspirators," what, then, are those who instigate and fund them? Surely they are not the type of people we want in the White House!

At this writing, there are numerous stories going around about one or more of Teresa's foundations contributing to various groups and organizations that, in turn, sent a big chunk of change back to the Kerry campaign.

We can only hope that some of that develops into media stories and criminal charges before next November.

Who is Teresa Heinz Kerry? She is a woman with way too much mouth for a political position and so much extra cash that she thinks she can buy the presidency for her current husband. She is also a far-left socialist sympathizer who would be terrible for land-owners nation wide if she had the power of the White House behind her.

She is a far-left socialist sympathizer.

Personally, I don't think we need to dig up dirt on Queen Teresa. I'm sure she has her share of skeletons, but I don't think it will be necessary to unearth them. All that woman has to do is open her mouth and sensible swing voters will recoil in horror at the thought of having her as First Lady. Letting her speak her mind at the convention was the best gift the Dems could give us. She's nuts!

We also run the risk of making a Hillary martyr out of her. Our side went after Hillary with a vengeance ("Hitlery," Evita, Vince Foster allegations, etc.) and where did it get us? The Left loved her all the more, the more we piled on. Now she's a Saint, and a Senator. The attacks could backfire.

I just say, let Teresa be herself, and she'll dig her own political grave. (Of course, we have the right and responsibility to point out and laugh at her gaffes, missteps, and outbursts, e.g., "Shove it!" We know the media won't.)

She is first of all, a rich B....!! She married a Heinz GOP who died in a plane crash...thus she got the money. Kerry latched onto her because she had more money than the first wife...thus he is very VERY VERY rich. Kerry with his rich wife and all the money make Bush/Cheney look like the poor homeless folk they would like them to be. That leaves all the rest of us to keep them in the style of living they intend to keep....and we will finance!!

Ooh, ooh, I know this one. She is really the spouse of Thurston Howell III, Eunice Natalie "Lovey" Wentworth Howell. Or some such string of names.

I agree , also she's anti-father, because she funds groups like the(feminists) that are anti-male/military.

If they win, I see civil war coming

She's a doped up rich Hoe not even fit the for Jerry Springer show.

There is a narcotized quality about her.

She has the sort of speaking style I'd associate with narcotics addicts or hookers.

Somehow, I think there is a story behind her like that thing where they had to physically restrain Kitty Dukakis to keep her from drinking nail polish during the campaign because she was a dried-out drunk. Another crazy Dim political wifey. And I think Teresa is cut from the same cloth as poor Kitty.
11 posted on 07/31/2004 10:07:24 PM PDT by George W. Bush (It's the Congress, stupid.)
[ Post Reply | Private Reply | To 9 | View Replies]
To: Choose Ye This Day
"All that woman has to do is open her mouth and sensible swing voters will recoil in horror at the thought of having her as First Lady."

You are right about that! 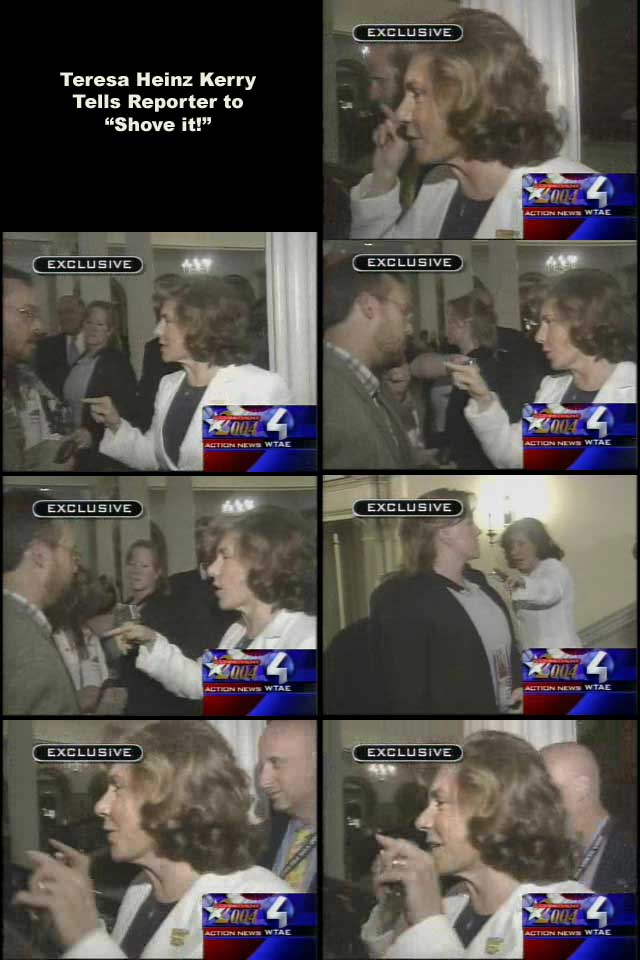 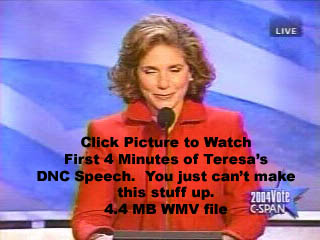 Listen to her "From the Heart" Comments! 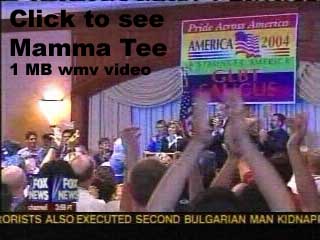 What was Senator Heinz like? (other than rich) Was he a good conservative senator?

He was a good Senator before we talked a lot about liberal vs conservative. She voted like he did in those days also, and other than that, we don't know too much. It might be worth a nexus search. There must be a reason she talks a lot about him today considering the fact she married Kerry, or visa versa.


You could make this stuff up, but it wouldn't be as funny. - bwteim

That's exactly what they will be asking in 5 months