WITH THE NATION’S FAUX INTELLIGENTSIA still reeling from “shame-shock-horror,” and the Hounds of the Blathervilles in full cry for Donald Rumsfeld's head on a pike, the likelihood of the picture above being seen on the front pages of the "leading" newspapers, or at the top of the news on any of the network news shows approaches absolute zero. After all, just what is the story here? Why should it be of interest to the Americans these “news organizations” supposedly serve?

The story concerns a medal given to a Marine: Marine receives Navy Cross. The marine in question is Capt. Brian R. Chontosh. “Chontosh” -- an unusual name, one that should be easy to search. But go to Google News and search for “Chontosh.” The hits are meager to say the least. As of this writing, there are eleven. To put this in perspective, a search for “Kerry Medals” returns 1,680 references from Google News while “Iraq Prisons” is a bonanza of reports and commentary -- 8, 660 to be precise. With such an overwhelming glut of news why should any news organization feature a story about the Navy Cross being given to a Marine? What’s that story got, anyway?

The story is this:

While leading his platoon north on Highway 1 toward Ad Diwaniyah, Chontosh's platoon moved into a coordinated ambush of mortars, rocket propelled grenades and automatic weapons fire. With coalition tanks blocking the road ahead, he realized his platoon was caught in a kill zone.

He had his driver move the vehicle through a breach along his flank, where he was immediately taken under fire from an entrenched machine gun. Without hesitation, Chontosh ordered the driver to advanced directly at the enemy position enabling his .50 caliber machine gunner to silence the enemy.

He then directed his driver into the enemy trench, where he exited his vehicle and began to clear the trench with an M16A2 service rifle and 9 millimeter pistol. His ammunition depleted, Chontosh, with complete disregard for his safety, twice picked up discarded enemy rifles and continued his ferocious attack.

When a Marine following him found an enemy rocket propelled grenade launcher, Chontosh used it to destroy yet another group of enemy soldiers.

When his audacious attack ended, he had cleared over 200 meters of the enemy trench, killing more than 20 enemy soldiers and wounding several others.

Try to imagine, for only a moment, what those actions entail. Try to put yourself, if for only a moment, on the ground and in the boots of Capt. Chontosh. Try to envision what it is to walk down a trench filled with people whose only mission is to kill you. They number more than 20. You are one. They are all armed. You have one rifle and one pistol. When you run out of ammunition, you have to take up the arms of the enemy. You don’t know if they are loaded or to what extent. But you keep going. In time, after you have killed 20 soldiers and wounded others, the shooting finally stops. Somehow, you are still alive. Somehow, your comrades are still alive. For now.

Could you walk down that trench? I couldn’t. I know all the usual answers: training, duty, responsibility to the men under your command. None of them really answer the question, do they? Call it courage and hold your manhood cheap if you cannot begin to match it.

If you were unfortunate enough to read the words of George Will, professional spinster, this morning, you read his handy guide to S&M:

Americans must not flinch from absorbing the photographs of what some Americans did in that prison. And they should not flinch from this fact: That pornography is, almost inevitably, part of what empire looks like. It does not always look like that, and does not only look like that. But empire is always about domination. Domination for self-defense, perhaps. Domination for the good of the dominated, arguably. But domination.
--No Flinching From the Facts (washingtonpost.com)

That’s what the Washington Post brought you this morning. Why? Because you haven’t had your nose rubbed in this enough yet. How does George Will and the Washington Post know this? Because it would seem that, as of this morning, Donald Rumsfeld still has his job. That’s what is important to the writers and editors of the Post and the other “leading” news organizations today. The prison story with its tops and bottoms and naked images that can be run in the paper with a little discrete blurring here and there is important to these organizations because it is something they can understand. It’s permissible porn and they like it, they really, really like it. Indeed, it would seem that George Will likes it a little too much.

Courage, though, real physical courage that requires a man to put the lives of his comrades above his own life, is beyond the shrunken moral scope of those who’ve spent the last week grinding out every last drop of rancid, phony outrage out of the Iraq Prison centerfolds they been displaying. Outrage and shock may have been permissible and even correct at the outset of the incident, but now doesn’t it seem as if there’s an element of perverse enjoyment creeping into the whole thing?

I began this comment thinking that it was an outrage that a report on the heroism of Capt. Brian R. Chontosh wasn’t deemed worthy of comment by the “leaders” of the “leading news organizations” of the United States.

It is they who are not worthy of him.

Damn. First I've heard of this.

To: LindaSOG
Bump for a Marine hero!

vanderleun : Thanks for posting this.

Just another Joe : Thanks for a brillant observation about the media.
13 posted on 05/11/2004 11:14:24 AM PDT by 68-69TonkinGulfYachtClub (FOX, CNN, ABC, CBS, NBC The big 5 liberal media. Read Free Republic instead and learn the truth.)
[ Post Reply | Private Reply | To 4 | View Replies]
To: vanderleun; LindaSOG; Leisler; Madame Dufarge
vanderleun, thanks for a great post!

LindaSOG, many, many thanks for the ping.

I like this part, his backup finds an RPG and hands it to him, whereupon the Captain uses it to flatten several of the enemy.
Irelevantly, I wonder if he yelled, "How do you like me NOW?!" when he fired it.

Thanks for the article Vanderleun, and Tonk, thanks for the ping.
Excellent article.
17 posted on 05/11/2004 11:28:38 AM PDT by Darksheare (I am Darksheare, and my tagline has no point. 'Tis a pointless tagline, which is the point.)
[ Post Reply | Private Reply | To 1 | View Replies]
To: vanderleun; 68-69TonkinGulfYachtClub; Old Sarge
There are a thousands more positive stories than there are negative stories. There are SEVEN HUNDREDS more sacrifices and thousands more casualties than the few negative troops we are hearing of in Iraq! We can and should NEVER forget that!

Thanks for the ping to this thread.

We must never forget the REAL facts!

God Bless the best Secretary of Defense we've ever had! History will prove us correct on this one.

God Bless Capt. Brian R. Chontosh. We may not hear about him in the news, but we heard about him here. We are grateful for so many like him. We are a grateful nation. We are so blessed! We should not take it lightly or for granted.

Thanks for sharing his story with us vanderleun.

God bless him and bless them all. 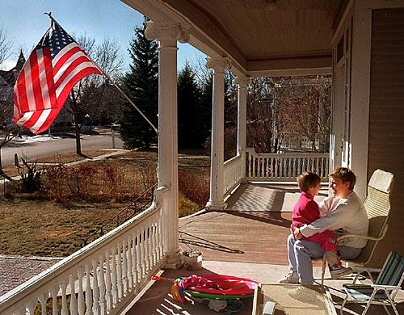 God bless him and bless them all.