(CNSNews.com) - Former Secretary of State Madeleine Albright gave a ringing defense of the Clinton administration's efforts to combat terrorism on Tuesday -- and a not-so-subtle jab at the Bush administration's policies -- when she appeared before a commission investigating the events leading up to the 9/11 attacks.

Albright told the panel that combating terrorism was the Clinton administration's top priority.

"We certainly recognized the threat posed by the terrorist groups," she said.

"During our time in office, the transnational [terrorist] threat was a dominant theme in public statements, private deliberations and foreign relations," Albright continued.

She outlined what the Clinton administration did to combat the threat of terrorism: expanding the CIA's counterterrorism center; intensifying security cooperation with other countries; enlarging counter-terrorism training assistance; doubling overall counterterrorism expenditure; freezing terrorist assets; training first responders in the U.S.; to name a few of the items on Albright's list.

According to Albright, "As early as 1995, President Clinton said, and I quote, 'Our generation's enemies are the terrorists who kill children or turn them into orphans.'"

Albright said that Clinton repeatedly "told the UN that combating terrorism topped America's agenda and should top theirs."

Critics, however, argue that President Clinton missed a golden opportunity to kill Osama bin Laden when he had the chance.

As for the future, Albright said - al Qaeda is the enemy that al Qaeda should be the focus of U.S. policy. In other words, she suggested, the war on Iraq is outside the scope of America's best interests.

"If we pursue goals that are unnecessarily broad - such as the elimination not only of threats but of potential threats -- we will stretch ourselves to the breaking point and become more vulnerable, not less, to those truly in a position to harm us."

Albright called al Qaeda the center of an "ideological virus" that has infected millions of people with the illusion of glory through destruction of death. She indicated that the only way to puncture that illusion is to boost America's standing in the eyes of the world.

The problem, according to Albright, is that "major components of American foreign policy are either opposed or misunderstood by much of the world."

"The bottom has indeed fallen out of support for the United States," Albright said. "This unpopularity has handed bin Laden a gift that he has eagerly exploited. He is viewed by many as a leader of all those who harbor anti-American sentiments and this has given him a following that is wholly undeserved."

She said Bin Laden must be exposed as "a murderer, a traitor to Islam, and a loser."

"The tarnishing of America's global prestige will require considerable time and effort to undo," Albright said, as she launched into a list of what she thinks America ought to be doing.

Albright called for "comprehensive reform of intelligence structures; vastly expanded commitment to public diplomacy and outreach, especially within the Arab and Muslim worlds; a far bolder strategy for stabilizing Afghanistan; revised policies toward the key countries of Pakistan and Saudi Arabia; expansion of [efforts] to secure weapons of mass destruction materials on a global basis; a new approach to handing and sharing of information regarding terrorist suspects; and a change in the tone of American National Security policy to emphasize the value of diplomatic cooperation."

Albright closed by saying that she "sympathizes greatly" with the president and other leaders, given the daily possibility of more terrorist strikes.

"We should all expect and prepare ourselves for the likelihood that further strikes will take place on our own soil, and we must be united in making sure that if and when that happens, it will do absolutely nothing to advance the terrorists' goals..."

Send a Letter to the Editor about this article.


TOPICS: News/Current Events; War on Terror
KEYWORDS: 911commission; albright
She outlined what the Clinton administration did to combat the threat of terrorism: expanding the CIA's counterterrorism center; intensifying security cooperation with other countries; enlarging counter-terrorism training assistance; doubling overall counterterrorism expenditure; freezing terrorist assets; training first responders in the U.S.; to name a few of the items on Albright's list.

According to Albright, "As early as 1995, President Clinton said, and I quote, 'Our generation's enemies are the terrorists who kill children or turn them into orphans.'"

That's not what Clarke said in a 2002 Frontline interview.

And according to the Dims, Clarke didn't lie.

Was he, were you, listened to?

Yes, slowly. Certainly after the embassy bombing in Africa in 1998, it was very obvious that what John was saying, what I was saying, was right: that this was more than a nuisance; that this was a real threat. But I don't think everyone came to the understanding that it was an existential threat. The question was, "This group is more than a nuisance, but are they worth going to war with? After all, they've only attacked two embassies. Maybe that's a cost of doing business. This kind of thing happens. Yes, we should spend some time some energy trying to get them, but it's not the number one priority we have."

Albright told the panel that combating terrorism was the Clinton administration's top priority.

Again, not so, according to the Dims boy Clarke.

So the frustration that a lot of us had, that people weren't paying enough attention, largely ended with the 1998 embassy bombings.

Some also say that due to the Lewinsky scandal, more action perhaps was never undertaken. In your eyes?

The interagency group on which I sat and John O'Neill sat -- we never asked for a particular action to be authorized and were refused. We were never refused. Any time we took a proposal to higher authority, with one or two exceptions, it was approved....

But didn't you push for military action after the Cole?

Yes, that's one of the exceptions.

How important is that exception?

I believe that, had we destroyed the terrorist camps in Afghanistan earlier, that the conveyor belt that was producing terrorists sending them out around the world would have been destroyed. So many, many trained and indoctrinated Al Qaeda terrorists, which now we have to hunt down country by country, many of them would not be trained and would not be indoctrinated, because there wouldn't have been a safe place to do it if we had destroyed the camps earlier.

So that's a pretty basic mistake that we made?

Well, I'm not prepared to call it a mistake. It was a judgment made by people who had to take into account a lot of other issues. None of these decisions took place in isolation. There was the Middle East peace process going on. There was the war in Yugoslavia going on. People above my rank had to judge what could be done in the counterterrorism world at a time when they were also pursuing other national goals.

So the clinton administration's top prority was NOT the security of the US, but "legacy" building for clinton.

Alby stfu!
2 posted on 03/23/2004 4:38:26 PM PST by observer5
[ Post Reply | Private Reply | To 1 | View Replies]
To: kattracks
"I can say with confidence that President Clinton and his team did everything we could -- everything we could think of -- based on the knowledge we had -- to protect our people and to defeat al Qaeda," Albright testified.

Did you think about shooting them? There were thousands of them in Afghanistan.

Did you think about accepting Usama's head on a Sudanese silver platter? Didn't think of that either. Hmmm!

Dick Morris in his book, Off With Their Heads, said that terrorism was not a priority during the Clinton Administration.

Maddie is trying to spin and rewrite history again. The Clintonites seem to resurface every few months and try, try again. Sorry, Bill, your legacy is set in stone. All this revisionism just doesn't work because too many other are telling contradictory stories, and Bill, they aren't convicted perjurers (aka liars).
5 posted on 03/23/2004 4:44:47 PM PST by TomGuy (Clintonites have such good hind-sight because they had their heads up their hind-ends 8 years.)
[ Post Reply | Private Reply | To 1 | View Replies]
To: kattracks

Do you swear to tell the truth to this committee .... ?

I watched some of it and what came through the BS was that she sidestepped much of the criticism by shifting blame and questions to the Defense Secretary.

Not Rummy, but Cohen!

She seemed to be saying that she was a hawk and he was a woosie!

Halfbright is actually right about that. My recollection of the events seems to support it.

In CNS News glowing story on former Secretary of State Madeleine Albright's testimony to the 9-11 Panel, you missed this key statement.

"It is possible and perhaps probable that anger over these detentions has helped (Osama) bin Laden succeed in recruiting more new operatives,"

With all the dirt throwing that's taking place during this presidential election....maybe maybe maybe this will come out too.

the hillbillies are really good at trying to rewrite history. I'm sure the Bush administration has enough to hang 'em all. 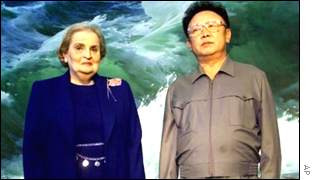 No missiles pointed at an American child huh? The Clinton administration was hell bent on creating an illusion that the world was at peace because of his leadership. This is why our men were butchered in the streets of Mogadishu and forgotten because Clinton did not want to engage an enemy militarily. It is shameless that this event has not been mentioned in the 9/11 hearings. This is also why every terrorist attack from the day he took office was never taken seriously.
19 posted on 03/23/2004 6:24:07 PM PST by Toespi (,)
[ Post Reply | Private Reply | To 1 | View Replies]
To: kattracks
The question was, "This group is more than a nuisance, but are they worth going to war with? After all, they've only attacked two embassies.