Acting Manhattan U.S. Attorney Announces $678 Million Settlement Of Fraud Lawsuit Against Novartis Pharmaceuticals Corporation For Operating Sham Speaker Programs Through Which It Paid Over $100 Million To Doctors To Unlawfully Induce Them To Prescribe No
justice.gov ^ | July 1, 2020 | DOJ

Specifically, the Government alleged that NOVARTIS organized tens of thousands of sham educational events at high-end restaurants and other venues, paid exorbitant speaker fees to doctors who gave no meaningful presentations, and provided expensive meals and alcohol to doctor attendees and their guests.  When those doctors then prescribed NOVARTIS’s cardiovascular and diabetes drugs, federal healthcare programs paid hundreds of millions of dollars in reimbursements for these tainted prescriptions.  As part of the settlement, approved today by U.S. District Judge Paul G. Gardephe, NOVARTIS will pay the United States and various States a total of $678 million.  NOVARTIS also made extensive factual admissions in the settlement and agreed to strict limitations on any future speaker programs, including reductions to the amount it may spend on such programs.

Acting U.S. Attorney Audrey Strauss said:  “For more than a decade, Novartis spent hundreds of millions of dollars on so-called speaker programs, including speaking fees, exorbitant meals, and top-shelf alcohol that were nothing more than bribes to get doctors across the country to prescribe Novartis’s drugs.  Giving these cash payments and other lavish goodies interferes with the duty of doctors to choose the best treatment for their patients and increases drug costs for everyone.  This Office will continue to be vigilant in cracking down on kickbacks, however they may be dressed up, throughout the pharmaceutical industry.”

FBI Assistant Director-in-Charge said:  “Not only did Novartis incentivize doctors to host these speaking events, reps bribed the doctors to write more prescriptions of the company’s drugs to give Novartis an advantage over competitors within their field.  Greed replaced the responsibility the public expects from those who practice medicine, not to mention the potential for an erosion of trust in the pharmaceutical industry as a whole.  This conduct was reprehensible and dishonest.  Patients and consumers deserve better, and our office will continue to pursue any similar allegations of this kind.”

HHS-OIG Chief Counsel Gregory Demske said:  “OIG will continue to work closely with the Department of Justice to investigate and pursue kickbacks regardless of the form they take.  To address Novartis’s conduct and the widely-recognized compliance risks associated with paid speaker programs, the CIA requires Novartis to make fundamental changes to its speaker program practices.  Under the CIA, Novartis must significantly reduce the number of programs and the number of paid physicians, and can no longer pay for inherently-risky in-person programs.”

HHS-OIG Special Agent in Charge Scott J. Lampert said:  “The various kickback schemes employed by Novartis threatened the impartiality of medical decision-making and the financial integrity of Medicare and Medicaid.  Greed must never play a part in patient care.  Along with our law enforcement partners, HHS-OIG will continue to hold pharmaceutical companies accountable when they step over the line to maximize their market share at the expense of taxpayer-funded federal health care programs.”

DCIS Special Agent in Charge Leigh-Alistair Barzey said:  “Protecting the integrity of TRICARE, the healthcare system for military members and their dependents, is a top priority for the DCIS.  When pharmaceutical corporations offer kickbacks and engage in other fraudulent activity to induce medical professionals to prescribe their products, they undermine the integrity of TRICARE and other healthcare plans.  The settlement agreement announced today is the result of a joint effort and demonstrates the DCIS’s ongoing commitment to work with its law enforcement partners and the U.S. Attorney’s Office, to investigate and prosecute companies that seek to profit by engaging in schemes such as those identified in this case.”

VA-OIG Special Agent in Charge Christopher Algieri said:  “Kickback schemes undermine our federal healthcare programs, including healthcare benefits administered by the U.S. Department of Veterans Affairs.  We will continue to work collaboratively with our law enforcement partners and the U.S. Attorney’s Office to protect the quality of veterans’ healthcare and integrity of VA’s programs.”

In its Complaint in this lawsuit, the Government alleged that between 2002 and 2011 (the “Relevant Period”), NOVARTIS hosted tens of thousands of speaker programs and related events under the guise of providing educational content, when in fact the events served as nothing more than a means to provide bribes to doctors.  NOVARTIS paid physicians honoraria, purportedly as compensation for delivering a lecture regarding a NOVARTIS medication, but, as NOVARTIS knew, many of these programs were nothing more than social events held at expensive restaurants, with little or no discussion about the NOVARTIS drugs.  Indeed, some of the so-called speaker events never even took place; the speaker was simply paid a fee in order to induce the speaker to prescribe NOVARTIS drugs.

The Government’s complaint further alleged that NOVARTIS sales representatives, on the instruction of their managers, selected high-volume prescribers to serve as the paid “speakers” at these events with the intent to induce them to write more – or keep writing many – NOVARTIS prescriptions.  The sales representatives then pressured the speakers to increase their prescriptions of NOVARTIS drugs, and often dropped doctors from the program if they failed to do so.  Further, the Government alleged that this widespread kickback scheme was the result of decisions made by top management at NOVARTIS’s North American headquarters in New Jersey.

As part of the settlement, NOVARTIS admitted and accepted responsibility for certain conduct alleged by the Government including the following:

The settlement also requires NOVARTIS to reform its business practices. Contemporaneously with this settlement, NOVARTIS has entered into a corporate integrity agreement (“CIA”) with HHS-OIG that will significantly curtail the company’s ability to conduct speaker programs going forward, and will dramatically reduce the amount of money that NOVARTIS may spend on such programs.  Under the five-year CIA, NOVARTIS speaker programs are only permitted under limited circumstances and must be conducted in a virtual format such as a webinar.  The CIA also requires multi-faceted monitoring of NOVARTIS’s operations and obligates company executives and Board members to certify compliance annually with the terms of the CIA.  The strict limitations on speaker programs imposed by the CIA are also incorporated into the settlement.  The settlement provides procedures for the Government to raise violations of these requirements with the district court.

This matter was initially brought to the Government’s attention by a whistleblower who filed a complaint pursuant to the False Claims Act.

Ms. Strauss praised the investigative work of the FBI, HHS-OIG, and DCIS.  She also thanked the Commercial Litigation Branch of the U.S. Department of Justice’s Civil Division in Washington, D.C., and the Office of Counsel to the Inspector General of HHS for their critical assistance in this case.

The case is being handled by the Office’s Civil Frauds Unit.  Assistant U.S. Attorneys Jeannette Vargas, Pierre Armand, Mónica Folch, Jacob Lillywhite, Jennifer Jude, and Jacob Bergman are in charge of the case, and Assistant U.S. Attorney Alex Wilson of the Money Laundering and Transnational Criminal Enterprises Unit is responsible for the forfeiture aspects of the case. 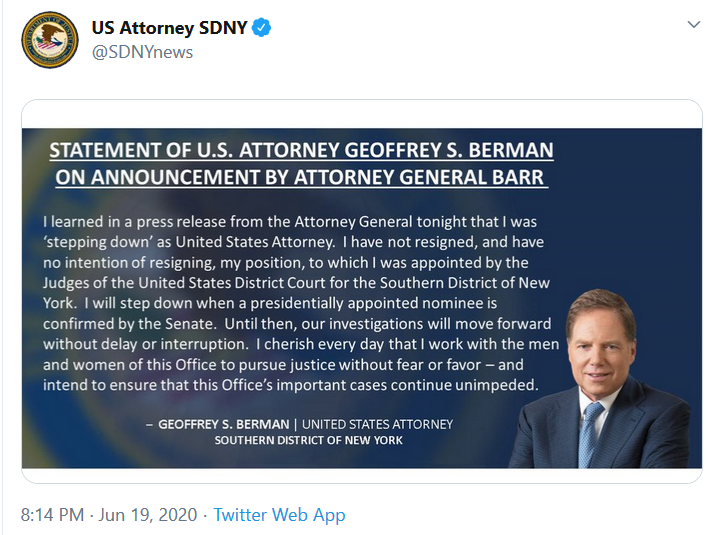 Then, President Trump fired Berman and a new acting attorney took his place? Acting Attorney Strauss is in action and Novartis/Ghislane Maxwell arrest are just two of the ways he's already had an impact.

US Attorney SDNY
@SDNYnews
·
18h
Acting USA Strauss: For more than a decade, Novartis spent hundreds of millions on so-called speaker programs, including speaking fees, exorbitant meals & top-shelf alcohol that were nothing more than bribes to get doctors across the country to prescribe Novartis’s drugs
1 posted on 07/02/2020 9:44:19 AM PDT by ransomnote
[ Post Reply | Private Reply | View Replies]
To: ransomnote

The fine is shockingly low.

If anyone knows a drug salesperson (they’re mostly young attractive females) you know this is only the tip of the iceberg.

I did not know that. I thought they were equally divided into men and women.

My wife has been in the medical field for years and yes they are mostly young ladies. They have been bringing lunch to the office a few times a week for years.

6 posted on 07/02/2020 10:01:48 AM PDT by 4yearlurker (Freedom.....where is she?)
[ Post Reply | Private Reply | To 3 | View Replies]
To: ransomnote
Novartis Gates foundation are like two peas in a pod. They have allied. Gates gave grants to the company. Many Novartis employees now work for Gates foundation.


What is up with Trump here supporting GAVI(Started by Gates)?
https://www.youtube.com/watch?v=_pV1U9s3vJ0

interesting timing... a warning to the fraud Fauci, bc this is how they have been (and will be) greasing him for the chinese virus vaccine ($)

this probably happens a lot.....they hold very fancy dinners for drug reps or docs to come talk for a half hour or so, sometimes longer, and all the meals are free.....I’m talking free drinks, and expensive rib eye dinners....often times they are given by pharm. representatives...

I’ve only met one. Fresh out of college, gorgeous, the starting pay was very,very good.

I think we all know that this is done all the time and that every Pharm Co does it.

Same here. They've gotta pick the stupid ones. Any titdancer would recognize the scam right off.

678 million? How much did they make on the fraud? If it was significantly more, then this was just a business cost.

What’s the rest of the title?

Why aren’t they going after Fauci?

I knew one (sister of friend). Drop dead gorgeous, and making six figures in her 20’s.

As long as it doesn’t interfere with the free drug samples I get at the doc’s office.