As I sit here watching our governor react to some of Pennsylvania’s counties defying his order to stay closed, I can’t help but get angrier and angrier. He calls the elected officials from those counties cowards, but he himself is a shining example of cowardice.

Let me give you some examples. While being asked about the rationale as to which counties should remain closed and which shouldn’t, he simply blames the virus rather than answering the question.

Another question was asked about the waiver process and the reasons why a company may or may not have been given a waiver. And, again, rather than answering the question, it was essentially, “Let’s just blame the virus.”

Keep in mind these are all questions that were written down and submitted to the governor. There are no journalists in the room to ask follow-up questions or to press the governor on any of his answers.

I believe Gov. Wolf is a coward, pure and simple. I don’t always agree with President Donald Trump, but at least he has the nerve to face the news media — and a biased news media to boot.

And he’s got a Genuine FREAK for a health secretary, or whatever its title is!!!

Good God in Heaven what has happened to this country!!

We can say it’s just dems but a waiver was just given to a transgender freak to be in the navy.

I know obama’s leftovers are still in the military but good grief!!

Worse, he called us deserters!

Next time I see him I plan to bring that choice of words up.

Gov. Wolf sure doesn’t ooze testosterone that’s for sure.

Wolf is a coward, a “slope-shouldered mediocrity”, as Tucker Carlson said. The Communist freak show interrupts Rush every day.

Current economic woes are not due to a virus, they have been brought to us by “experts,” medical bureaucrats, and politicians.

His Health Secretary has more testosterone than he does.

Wolfie is as partisan a Democrat as there exists. About 17 years ago, when I was a candidate for York City Controller, I was told that I should talk to Wolf. Against my better judgment, I did. He told me that he never supports Republicans.

My guess is that Wolf and his tranny have it going on.

I’ve noticed the some of these “Directors of Health” are the most unhealthy, pale, overweight, sickly people you could imagine. 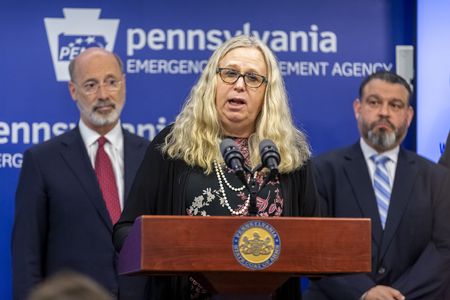 The people who vote for coward democrats are too blame, folks. Remember that especially when you are dealing with your neighbors, “friends”, family members or those you go to church with who vote for democrats.

Are you willing to put the blame where blame belongs?

Put some on Scott Wagner and the Republican party, he was a disaster as a candidate.

“Democrat” and “POS” sort of go hand in hand anymore...