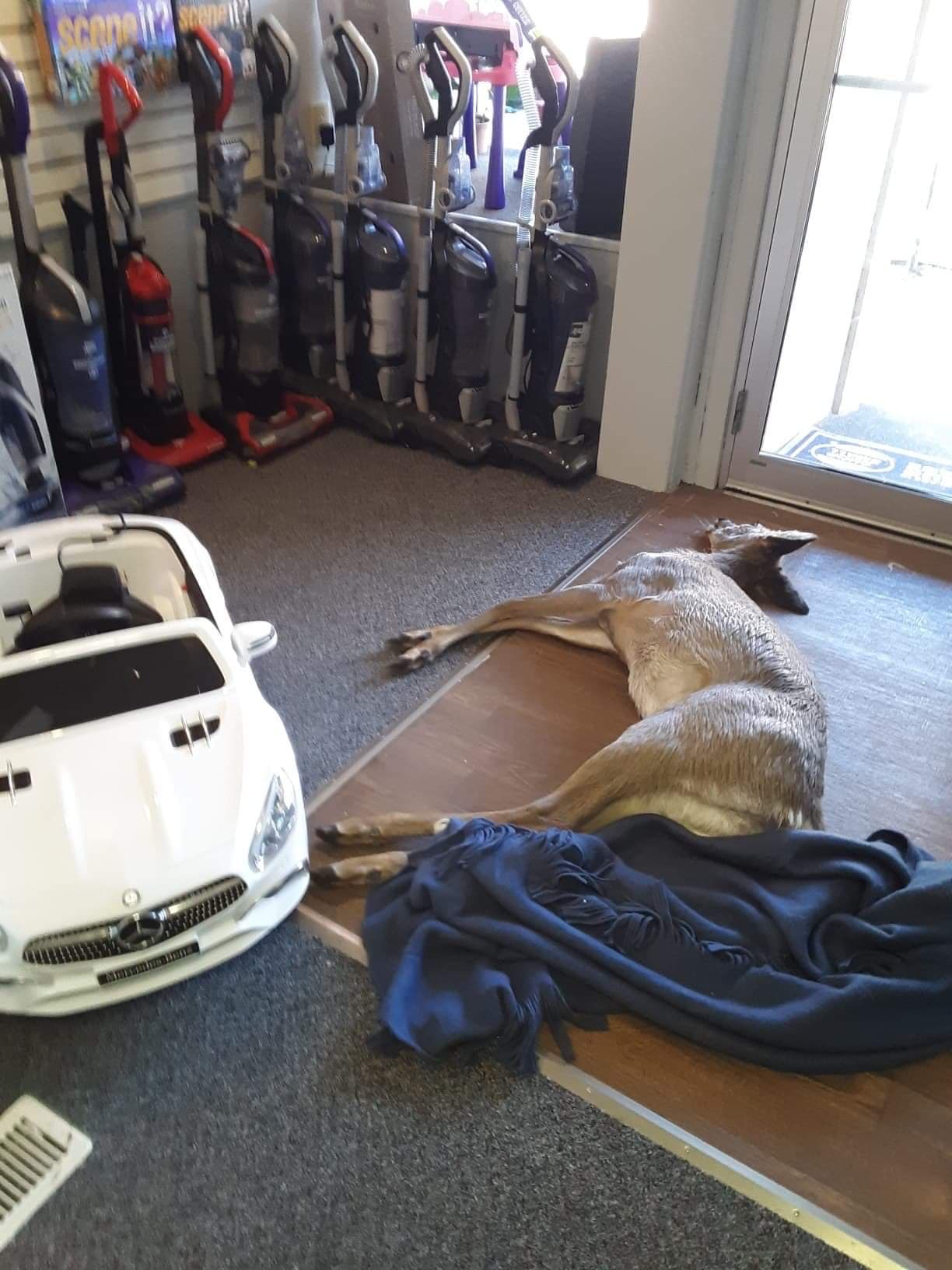 SHAWANO, WI – A Shawano Downtown business recently had an unexpected visitor. A deer ended up inside a Main Street business last week. It may sound like the start of a bad joke, but for awhile, it was no laughing matter.

Duane Schultz owns Kim’s Discount store on Main Street. He says Thursday was a day that he will never forget.

A customer just walked out the door and he said a few minutes later he heard a crash.

“A deer came into the door and it stopped at the table and looked at me,” he said. “All I could think was, What do you want?”

Schultz says the fromt door was unlocked but it caught him off guard.

He says the deer walked around the store for a little bit before running into the door head first.

“It laid there for a little bit but then started grunting and kicking and I thought were were going to pay the price then.”

He said the deer never got back up and he called 911.

“I told the lady that I needed an officer because I had a deer in my store.”

Schultz says he believes that that deer hit her head on the door but did not cause any damage.

“She tried to go out the door that she came in from and I just watched her go down and thought, oh my, she just committed suicide.”

Schultz says the fur on the deer was wet which indicated that the deer may have been in the river before coming into town.

It was believed that the deer was about a year home.

Schultz says the officer gave him permission to take the deer home to process it.

Luckliy, no customers were in the store at the time and there was not any damage to the store.

Here the testimony from the store owner.

TOPICS: Outdoors
KEYWORDS: cheese; moose; sister; venison
1 posted on 05/12/2020 6:46:35 AM PDT by SJackson
[ Post Reply | Private Reply | View Replies]
To: Iowa Granny; Ladysmith; Diana in Wisconsin; JLO; sergeantdave; damncat; phantomworker; joesnuffy; ..
Outdoors/Rural/wildlife/hunting/hiking/backpacking/National Parks/animals list please FR mail me to be on or off . And ping me if you see articles of interest.

At least the store owner is a little ahead of impending meat shortages.

At the hotel where wifey works moose have tried several times to enter the building. Luckily so far none have yet to try at the auto doors into the main lobby. But there have been some very close encounters.

And I’m talking real moose here - not your sister!

This article reminds me of an incident that happened to my late Aunt June & Uncle Bill in 2010 (Both are gone to Glory now.), when they lived outside of Cheyenne in WY.
(I preface my comment with the FACT that my Aunt June was WY raised, a cowgirl & about the calmest lady that I’ve ever known.)

My aunt was reading BETTER HOMES & GARDENS in the living room one Fall afternoon in 2010 when she heard a noise in the back of the house.
(Thinking that it was one of the their large dogs bumping into something on the back deck, she paid little attention.)

All of a sudden a large Bull Elk ran through the kitchen , down the hall & into the living room. The elk than crashed through the picture window & departed the scene at a dead run, with 2 of the dogs “hot on his heels”.
(The glass patio doors that were in the back of the house were open at the time.)

Aunt June (later told me that she) said, “Well forever more.”, poured herself another glass of iced tea & then called a glass shop to get the window repaired.

When my Uncle got home from the office, at about 1730, he found Aunt June reading a magazine on the living room couch & inquired, “Dearest, is there anything that you want to tell me about your day?”
(The picture window was replaced by the glass shop, the next morning.)

Country living is frequently “unique” & quite unlike events that happen in urban & suburban areas.
(I heard this story the following night, during our regular weekly phone call.)

Could the deer been severely ill already? Would a head butt kill it? Either way....poor little thing.

I would be concerned about the chronic wasting disease or whatever it is infecting deer in Wisconsin.

As much as some people adore “Bambis”, too many deer is a plague and a pestilence, more like extra large rodents. And they are becoming just one of the many beasts that are overrunning parts of the US.

Wild hogs are devastating fields from Texas to the east coast and north as far as Indiana, so far. Nutria destroy levees. And don’t forget the alligators and anacondas.

Even too many beaver will destroy an area, as is happening in the islands south of Argentina.

And in a small town a few miles down the coast from us...

I’d be careful with this deer....could be chronic wasting disease....

where’s your wife work at?

Concealed carry for protection from man or beast.

But vat about squirrel? 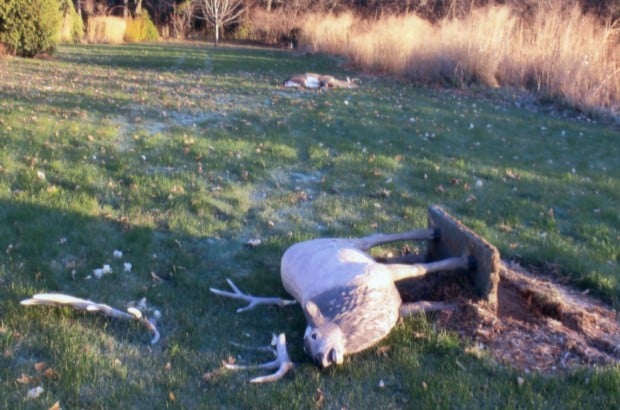 During the rut is when the odd things usually happen, this guy woke up and noticed some hooligans had knocked his wife's statue of an elk down during the night. He then saw the dead buck a few feet away with a crushed skull and put 2 and 2 together. He immediately took the deer to be tagged and then stood the statue back up. Figured what the heck, free venison but his wife made him cover it up.

A hotel at the base of the Canyons side of Park City Mountain Resort.

Was the poor deer eyeing a new vaccuum cleaner, or a Mercedes? Is this even a question?

The car must have looked bigger from the sidewalk. Imagine the disappointment. Well no need to imagine, one look into the headlights and... 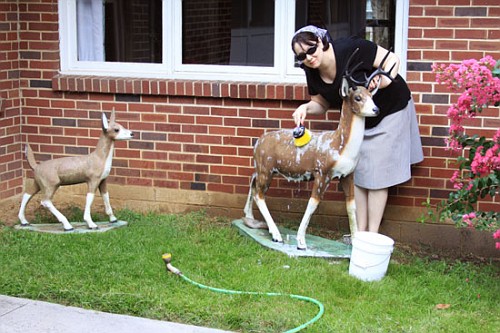