In an end run around Republican legislators, Oregon’s Democratic governor ordered the state on Tuesday to lower greenhouse gas emissions, directing a state agency to set and enforce caps on pollution from industry and transportation fuels.

TOPICS: Local News; Science; Weather
KEYWORDS: capandtrade; climate; despot; dictator; energy; executiveorder; fuel; globalwarming; governor; greennewdeal; katebrown; oregon; taxes Navigation: use the links below to view more comments.
first 1-20, 21-35 next last
I am a real native Oregonian, but my state now is run by California lunatics. Here is the letter I wrote on the subject, which of course was never published anywhere.

Applying a carbon tax to Oregon citizens is a poorly disguised strategy to impose huge sales taxes. The tax will be passed to residents except for the 100’s of businesses failing due to unmanageable tax burdens and regulations imposed by a new bureaucracy. For those people remaining, they can expect large cost of living increases.

Supposedly SB 1530 and its 177-page amendment were critical because resent years recorded the highest global temperatures since recording began in 1880. That announcement removes credibility from the man-made global warming concept and from Oregon legislative proposal to fix it.

Global warming models fail to reserve a dominate roll for the sun’s radiance. In 1880 it was impossible to measure the sun’s effect, because until 1978 precise, independent solar irradiance measurements were impossible. The sun is a variable star in which solar activity, luminosity, and diameter cannot be precisely predicted, but must play an important role in any model, so only an increment and not total temperature could have been reported.

Even if man-made climate change was real, the policy would have an unmeasurable impact. Oregon occupies .0017 of the total land surfaces of the planet. Also, two of the greatest polluters on the planet are China and India. Oregon has a population of 4.18 million. The population of Beijing China is 24.18 million. That of Delhi India is 26.5 million.

Oregonians should not be subjected to a huge new bureaucracy and suffer so horribly as a result of this deception imposing a sales tax.

THE SUN DEFINES THE CLIMATE http://www.gaoran.ru/english/astrometr/abduss_nkj_2009.pdf

How Many Square Miles Is the Earth? (57 million square miles) https://www.reference.com/science/many-square-miles-earth-9a828fe84c9dab10

So the Governor is a liberal fascist dictator.

Lets see how far she will go?

Well done.
I’ve said for years that Cap and Trade
is actually Cap and TAX 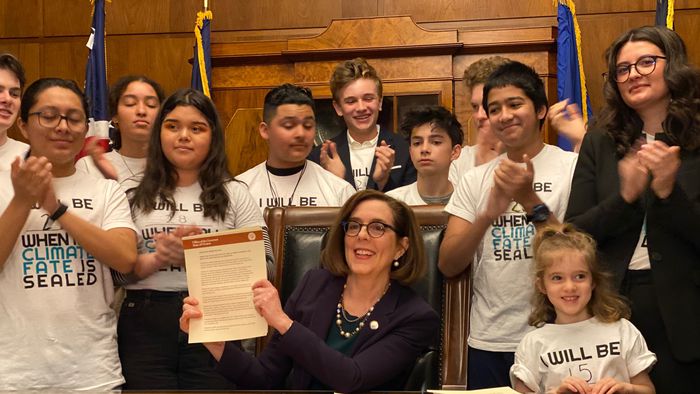 This is Venezuela-level economy-destroying stuff.

The problem is your Governor is a Democrat, therefore your letter is too complex for said governor to comprehend. Try something along the lines of Weekly Reader style of writing, and maybe you might get the point across.

The electric companies should shut down completely for two months explaining that to reach the required carbon reduction goals the companies will shut down two months a year every year.

She looks like one who has NEVER had an orgasm.

The only long term effect this will have is to make things more expensive for normal people and increase the unemunemployment rate.

it won’t affect the earth in any way.

“...She looks like one who has NEVER had an orgasm....”
Yeah...that’s only part of her “problem”. Being a RAT will do that to an individual, especially females in govt. Insanity reigns right on up there. Always basing decisions on “emotions” rather than facts...that’d be them.

This is what is in store for us if we lose. They will use this climate BS to rape us financially and make our lives miserable.

This is a TAX and beyond the ability for a Gov to implement by Executive Order.
Unless Oregon has become a dictatorship...which is possible.

THANKS FOR THE NOOSE AROUND OUR NECKS A##WIPE

This should be legally a slam dunk. Governors cannot be dictators, no matter how much they want to be. And though the state courts may be utterly rotten as well, the federal courts will often intervene.

The important thing is for the Republicans, and those corporations affected, to get the lawsuits, whether they win or lose, into the courts ASAP to get the ball rolling.

If they win right off the bat, the courts will slap an injunction against the enforcement of the EO.

16 posted on 03/10/2020 6:58:06 PM PDT by yefragetuwrabrumuy (Liberalism is the belief everyone else should be in treatment for your disorder.)
[ Post Reply | Private Reply | To 1 | View Replies]
To: Candor7; Retain Mike
So the Governor is a liberal fascist dictator. Lets see how far she will go?

Partner, these liberal far left Rat vermin are getting on my nerves.

We need fossil fuels rat now!!! The least expensive is to use fossel fuels in our personal cars and trucks and other vehicles.

This governor is one big Douche Bag.

She probably does not know her butt from third base.

she has multiple TAXgasms however