CUMBERLAND — Kenneth Lloyd wants to buy the Negro Mountain signs, which disappeared from Garrett County roads earlier this year, and install them in his front yard.

Negro Mountain occupies a 30-mile stretch of the Alleghenies from Deep Creek Lake north to the Casselman River in Pennsylvania.

The ridge in Garrett County reaches 3,075 feet at its peak, and in Somerset County, Pennsylvania, marks the highest point in the state.

According to Lora Rakowski, acting director of the state highway agency’s office of communications, the removal of the signs cost $212 in staff time.

“We know this issue involves an important piece of local history,” she said via email. “We also know that some people feel the signage was inappropriate.” 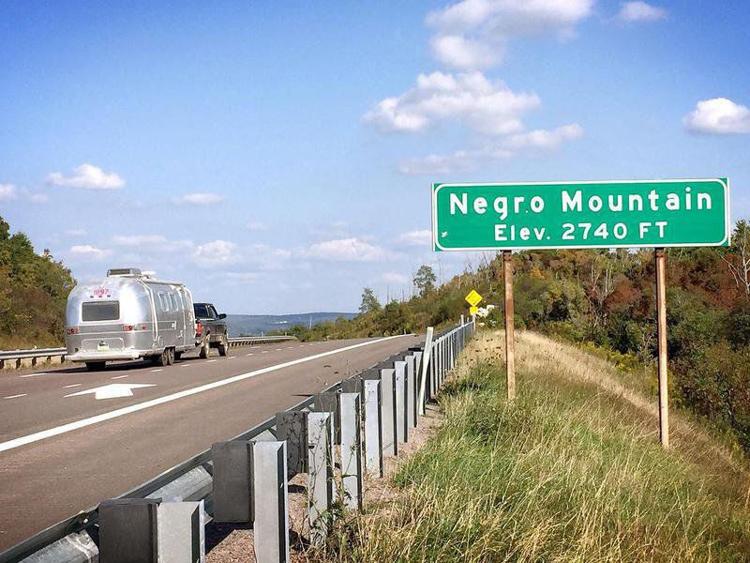 Is it now “African-American” Mountain?

North Carolina already has Black Mountain. Should that be banned, too?

6 posted on 11/03/2019 5:29:23 PM PST by a fool in paradise (Recall that unqualified Hillary Clinton sat on the board of Wal-Mart when Bill Clinton was governor)
[ Post Reply | Private Reply | To 4 | View Replies]
To: Viking2002
So I read the whole article and I gather that they weren't sure about the first name of the loyal Black servant who died on the mountain fighting. Maybe that is why they named it what they did rather than using the brave fellow's given name.

I bet these snowflakes want the Republic of the Philippines to rename the island of Negros, too!

I’m not what one may consider a PC type but I had always thought that naming a city, town, county, state or even a mountain was supposed to be either a sign of respect for the named person or at least a historical event occurred.

Before ‘we’ know it, ‘they’ will have banned any and everything that even resembled CSA.

I am wondering how the 8 billion Chinese etal named LEE are going to handle this along with ANYTHING referring to Black will be handled.

Just last week I chastised a Black friend of mine for buying crackers. Join the parade.

Oh, he shares the same last name as the esteemed Gov of VA (grew up in same county Ralph about 4 years older).

Anyway I told my buddy that for Halloween he just had to put on a pair of gloves, hat and go as the Gov in blackface.

My recollection is that several years ago some black female State legislator in Annapolis complained about the name of the mountain and wanted it changed, but was unsuccessful in her efforts at that time. Obviously, however, all resistance in the face of her whining has simply collapsed, to the surprise of no one in the People’s Republic of Maryland!

14 posted on 11/03/2019 5:56:33 PM PST by Starcitizen (American. No hypenation necessary. Send the H1B and H4EAD slime home. American jobs for Americans)
[ Post Reply | Private Reply | To 10 | View Replies]
To: Captain Peter Blood
Well, they can rename it 'Go Take A Flying F**k At A Rolling Donut Mountain', for all anyone cares what they do after this. These mountains were named for historical or cultural events or points of fact. We also have Polish Mountain and Savage Mountain, among others, and you can bet your sweet bippy that there's going to be the usual SJW's looking to scrub their names from the SHA roadmaps because of the 'racist' connotations. These mental defectives will create an injustice or controversy where none exists, if only to validate their own self-worth. They are without redemption. And they look for Leftist enclaves like Maryland as a soft target to thrust themselves into a local culture, stir discontent, and infect it with their own existential failures. In a more just and proactive world, a couple of them would be shot as a message to the rest that the local citizenry don't suffer public nuisances gladly.
15 posted on 11/03/2019 5:58:15 PM PST by Viking2002 (WARNING: Eating too much oatmeal can make you look like Wilford Brimley.)
[ Post Reply | Private Reply | To 4 | View Replies]
To: Viking2002

Think what those signs will bring on eBay in 30 years when people realize how dumb their parents generation was.

RenMe it to ‘Liberals Leap’ or ‘Socialist Suicide Point’.

I was afraid of that. Putting one’s idiocy on display is not a good idea. I guess some people think otherwise...

Since when is a bump 2740 feet above sea level a mountain?