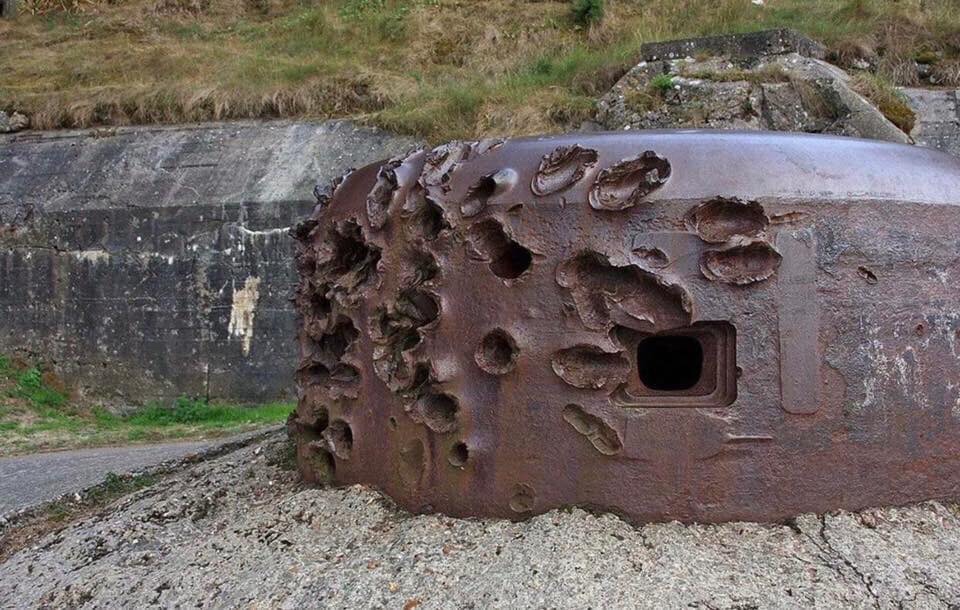 Your link and the sublinks are the way the ‘net used to be.

Pure info/data in context all the way down.

Or the same caliber on a Churchill or Cromwell tank. That the hits on the turret are on the landward side excludes naval gunfire.

Beautiful work by our boys. Hopefully those nazis were dead or bleeding from the ears and unable to harm many GIs until a flamethrower got there.

I went to the American Cemetery in Normandy a few years ago.

Most aren’t aware, that nearby is a German cemetery that is still very well taken care of.

That’s true. My dad was in Flotilla 4, all his air-breathing bulldozers got ashore.

One of my closest friends in Mississippi is a ships captain who used to work for the federal govt as a security contractor and before that was a Ranger...not just he did Darby but a real ranger ...1st battalion I think

His maternal grandpa was a Wehrmacht officer on the Eastern front...a captain or major equivalent I think from some elite branch ....he was trying to get west at the end of the war but was caught by Ukes who sent him east.

Russkies held him till 1956 in the work camps

It kept him entertained

Normandy through German eyes had the pill-box inhabitants scrambling away from the gun holes as the white phosphorus rounds came in, burning every thing they touched. If a round got inside, it burned up all the oxygen and suffocated the soldiers.

Tanks were deployed on Omaha beach in the first wave. (DD Tanks on D-Day. Landing-Schedule Diagram - Omaha Beach.) The belief that there were no tanks or that most were lost in the DD sinking is an urban legend.

The intent was to land 112 tanks in the first few minutes of the attack and 12 more later in the day. About 70 M4 tanks were landed in the first wave, and about 40 survived the day, though survival for some means they could be repaired over the next few days, and some of the survivals landed after the first wave..

Would not have wanted to be inside but, safer than being outside....for a time...

A late uncle of mine was a radio operator on a US merchant vessel that landed supplies at Omaha on D+1. He was able to go ashore for about an hour. A veteran of the perilous North Atlantic convoys run, he was pleased to see the devastation wrought on the German positions and an open wire cage holding a batch of miserable looking German prisoners under guard.

Yeah, I was gonna say that the Yamato didn't come under naval gunfire. It was sunk by 280 dive bombers and torpedo bombers.

Odds of any spalling?

Imagine sleeping on a ship knowing that UBoats are sinking ships all around? Make for some insomnia?

Story goes that Walther P. himself did the corrosion and weathering testing on the sample that accompanied the Krupp bid.

Amazing. Sounds like they do better than I do with a scope!!

My uncle did not like to talk about it, but he saw ships torpedoed, men on fire, and lifeboats full of men who could not be rescued. There were strict orders not to stop and take on survivors because to do so disrupted the convoy and invited further attack. The US Merchant Marine had an astonishingly high casualty rate in WW II. Promises of veterans benefits that were pledged during the war to keep the ships manned were never fulfilled.

That does sound plausible. I was just repeating what was written at a private museum on the exit of Omaha Beach. If it was destroyers, that is some shooting!!