IMHO, If the FBI FISA un-redacted report had been release before the Midterm elections, the Derps would have started rioting in the street blaming POTUS for interfering in the Elections. This would turn the normies against POTUS. Timing is everything.

I don’t think we will see the FISA until mid 2019 or shortly before the crooks announce their intent to run for office in 2020.
Timing is everything.

Patience grasshopper, all things in their due time.

Thanks for the Beatles music, I feel better...

Mairdie was talking about archiving a hard drive in a Bank Vault. Bob was telling her it was not permanent. Texokie asked about whether her drive or memory sticks would be safe from EMP in a bank vault. There were some posts regarding archive media that turned into an EMP protection question.

well, only a little.... I did see some references to canning, which made my mouth water,...

In the immortal words of Ronaldus Maximus:

For us here in the very backwater of the Q Qingdom, verification takes the form of eating copious amounts of popcorn, researching, and watching the movie!

You are welcome to join us, but you can’t talk too loud during the movie! That’s just plain bad manners!

*texokie offers Uncle Sham some popcorn and motions to a comfortable empty chair. Texokie and the other FReeQs in the Qommon Room wonder what Uncle Sham will do. We really do all hope he wants to eat popcorn and research...and watch the movie with us. But it is his choice.*

Oh you poor dear! Someone at your age, asking THAT question. I really think you should just move the f along. Don't post to me anymore.

And I repeat myself, #FRNeedsALikeButton!!!

You have proven to me that the Rothschilds have a controlling interest in PGE.

And why wouldn't they? It's the socialist/communist model, right? Taking what should be a private industry (power) and gelling it with the socialist politicians and the socialist state. That's exactly what PGE seems to be these days.

And, make no mistake. California is a socialist state run by socialist politicians.

I really am not cool with globalist enemies of America controlling our power grid.

FYI, did you notice how both Jack Black and Mac Truck were quick to defend the Rothschilds?

p.s. Thanks for the evidence, Hostage.

You trolls would do well to believe Hostage when he speaks. Unless of course, he runs contrary to me.

I checked that and watched part of a couple of videos (or tried to, got eye ache and nausea from one which was jiggling around constantly). Copying the comment, maybe I’ll try to watch the Daily Wire vid tomorrow.

Speaking of which…I received this email tonight from a friend in San Diego. Apparently, the invasion has started. I doubt this is in the news….’Not sure how to …format… this. but here it goes…

“Here is the latest verified Intel from the San Diego/Tijuana border:

The excrement is hitting the fan in Tijuana as thousands of illegal alien Hondurans, including violent criminals, start to arrive and the local residents are livid about it. They are ready to take matters into their own hands (see Facebook group below).

CBP closed 3 lanes at the San Ysirdro border and 1 lane at Otay Mesa at 8am this morning. Will be closed indefinitely. Wait times to cross the border were very long today. CBP is putting up hardened defenses of the checkpoints to protect from caravan alien mobs in case they do what they did when they broke down fences and stormed into Southern Mexico from Guatemala a couple weeks ago.

350 aliens in 8 busses arrived in TJ today and immediately went to the beach. Many of them climbed the fence, flipping off Border Patrol agents, and yelling at them. Some even climbed down on the American side and walked about 10 yards north on the sand, taunting Border Patrol to come arrest them. Reportedly no arrests were made. About 40 total BP agents from the area had to converge on the beach to keep the Honduran animals at bay.

Video from about 3pm today of the hostile mobs: https://www.facebook.com/NoticiasBlancoyNegro/videos/574510236303506/

Amy and Paloma were there on the beach on our side to observe and live stream video. Only one other media guy bothered to come out to get the story on the U.S. side.

850 more Honduran aliens are arriving at 2:30 am tomorrow (Wednesday) on 18 buses. The shelters in TJ are at capacity. The local authorities want them to camp in a big park about a mile south of the border, but so far the aliens are refusing to go there. They are staying near the border at the beach.

About 3000 more caravan aliens are inbound to TJ over the next few days. This is shaping up to be a total disaster for both sides of the border.

The only question remaining is will our federal government keep processing them all in on their fake asylum claims like they have been doing for many years now, 24/7/365 at a rate of about 570 PER DAY all along our southern border. This is a mass invasion scam by foreign criminals and peasants that must end now!”

WOW! Golly I hope so!

We know there is a lot of habbenings behind the scene that we do not know the timing of disclosure, but know they will occur. We are 3-6 months ahead of the normies and Non-FreeQ’s.

We have a great conglomeration of excellent minds working together to sis the information. There have been comments to let Q spread into the main forum.

I say NAY! NAY! Nay! The Q thread moderated by our dear MOD is vital to the cohesion of information. How would Bagster ever be able to collate the information into 3-5 Oricles per week?
How would TEXOKIE ever be able to keep the Quanteen organized? How would we see every meme from aMPU & KitJ? And the collection thereof by Little Jeremiah?
Swordmaker would be inundated with multiple requests to add the same information into his encyclopedic LexiCon.

If we went into the main forum and posted on different threads we would lose the continuity of information transfer.

After POTUS reveals Q, then we should copy comments as appropriate to the main forum threads. But our Q thread need to stay as the Main Thread of all things Q.
~~~~~
ssschev is done musing and walks into the Quanten Qitchen looking for some Quiche. He finds TEXOKIE in the Qitchen and politely request that she repost this to her ping list. TIA TEXOKIE

And so it begins. Welcome to "Palestine". 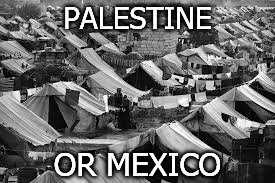 Should people be posting the DHS 2-Election Trap Method online?

To: Pete from Shawnee Mission; TEXOKIE; All
Just a reminder that after an EMP. The bank vaults will not be accessible for some (long?) time let alone what was in your bank account. Those 1&0’s representing your account will probably (accidently??) disappear.
~~~~~~
sschev goes back to his favorite beanbag chair and curls up to listen to the Steinway.

Too many moving parts to keep track of, and I certainly lost track of that one!

*texokie gives Faithful guard dog ssschev a tasty bone with some morsels of goody still on it. Someone is playing a lovely sonata on the Steinweigh *