But I forget the moral of the story of Blaine the Train. Refresh?

While Oracle, Q, and the Trump administration are close mouthed about Ezra’s role at Oracle, it does seem as though Ellison has been generously backing someone whom the other reports have noted in connection to Ezra: David Nunez.

Excerpt from the NY Times article which is the one Q posted TWICE:

“…National Security Council aides usually draw little public scrutiny, but Mr. Cohen-Watnick was swept up in the tumult of early 2017 when Mr. Trump accused the previous administration, without evidence, of wiretapping his phones at Trump Tower.

Mr. Trump’s allegations were bolstered by Representative Devin Nunes of California, the Republican chairman of the House Intelligence Committee, who said he had evidence that Mr. Trump’s communications were incidentally swept up in surveillance of foreigners by American spy agencies.

Mr. Nunes did not divulge the sources of this information, but American officials later told The New York Times that Mr. Cohen-Watnick, at the instruction of two senior White House officials, helped print intelligence reports that later served as Mr. Nunes’s proof….”

And so now, lookie here!

This may be of interest to our own Oracle living in Nunez’ district - bagster - as well as our other California FReeQs!

“The Daily Beast reports that top Oracle executives have given so much money to Rep. Devin Nunes’ reelection campaign that some contributions had to be returned.”

“What made the donations stand out, however, was not the size of them—$35,000 was a relatively small amount considering the more than $1.2 million that Nunes has raised so far this cycle. It was the timing of the giving,” Markay writes.”

“COHEN-WATNICK AND FLYNN ARE CLOSE POLITICAL ALLIES OF NUNES, A REPUBLICAN WHO CHAIRS THE HOUSE INTELLIGENCE COMMITTEE.”

“Flynn, a retired U.S. Army general, pleaded guilty in December to lying to the FBI about conversations with Russian Ambassador  Sergey I. Kislyak in late 2016.”

Ellison Is a Political Outlier in Silicon Valley
“In addition, Markay explains that “Oracle is a Republican outlier in Silicon Valley, and its executives’ right-leaning politics (and political contributions) present opportunities in Trump’s Washington unavailable to competitors like Amazon, a frequent target of (President) Trump’s ire.” Oracle’s chairman and chief technology officer is Larry Ellison. Forbes estimates Ellison’s financial worth is $58.9 billion.”

Nunes Has History of Landslide Victories

“Nunes, of Tulare, customarily wins reelection by landslide margins in a district with a large Republican voter registration edge.”

“This year, three Democrats are challenging Nunes in California’s 22nd District. One of them, Fresno County assistant district attorney Andrew Janz, is receiving national attention. That attention is largely the result of Nunes’ controversial chairmanship of the House Intelligence Committee.”

“THE DAILY BEAST STORY GOES INTO GREAT DETAIL ABOUT COHEN-WATNICK’S RELATIONSHIP WITH NUNES. IT ALSO EXPLAINS WHY SOME OF THE ORACLE DONATIONS HAD TO BE RETURNED. YOU CAN READ THE STORY AT THIS LINK.”

[Caps are texokie’s. Following is the link referred to:]

So, my take away, from all this is:

5> The administration had connections with Oracle, and smoothed the way for Ezra to work there. But note that the timing of his entrance to Oracle also corresponded with increased funding of Nunez’ candidacy.

Is Ezra at least a component of the “stealth bomber” mentioned by Q? As our own Oracle would say, “stay tuned.”

I’ll follow Q’s directive and “keep all of this in mind!”

It appears that is a very excellent theory.

1,163 posted on 11/09/2018 8:32:20 PM PST by bagster ("Even bad men love their mamas".)
[ Post Reply | Private Reply | To 1002 | View Replies]
To: Bob Ireland
That receivership business has been met with stone cold silence. Gaetz was howling for it since late this morning (CST). I see what you see.. Gov Scott wants lawyers, political gab, and party staffers togetherness! It’s bs. OTOH, Popadopolus reports he knows who the DS Spy 🕵🏿‍♀️ is inside the White House administration and said the person will be exposed soon, according to Gateway Pundit, or whoever. (Video interview at GP)
1,164 posted on 11/09/2018 8:35:12 PM PST by RitaOK (Viva Christo Rey! Public Ed & Academia are the FARM TEAM for more Marxists coming, infinitum.)
[ Post Reply | Private Reply | To 1145 | View Replies]
To: bagster; Cletus.D.Yokel; little jeremiah; xone; ransomnote; Melian; KitJ; All
"""Lazy. Thinking is hard work.""" 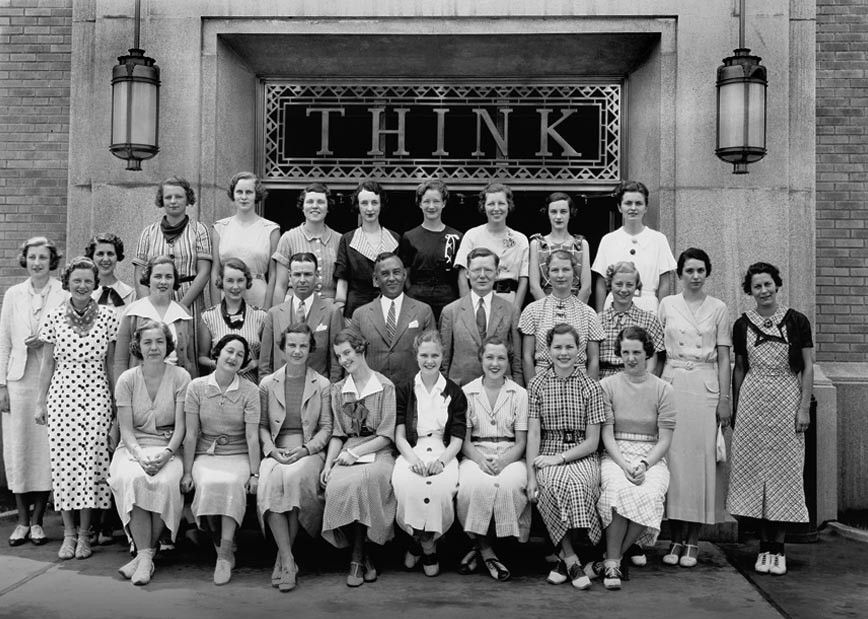 "IBM headquarters at Endicott, New York, 1935. Note the “THINK” motto emblazoned on the building. Pictured are 25 female college graduates, newly trained for three months as IBM system service women. Their role: after assignment to IBM branch offices, they assisted salesmen in assessing customer requirements and training customers on the use of IBM equipment. Their three male instructors are also pictured."

"Thinking is hard, and most of us do not spend enough time doing it. At my advanced age and despite an active curiosity in earlier years, I still find myself formulating questions about all matter of things which I had never questioned before."

So true. What’s tough about thinking is that it often takes time. As you wrote, most great thinkers have to let ideas sit and simmer for a while. That’s hard to do when you want the answers quickly — as we often do!

Ginny, I totally agree. As a great thinker myself I do sit and simmer to the point my gray matter drys out.

If I'm fortunate my wife will come along with her watering can and revive me. Her timing is not all that good, however. I have wondered if her delay was intentional.

Many times I find myself behind on a FReeQ thread after a simmer. Thankfully, there usually is much talent on the thread already who have already come to the correct answer, as I had already imagined. Hard to believe, but true. They are that good.

thanks, I just realized that...

Beat me to it. That’s what I get for having a job and for sleeping at night.

Bless your heart! Thanks for doing all you do here!

little Jeremiah, go to bed! Don’t make me come out there....

Well, here is a reasonable distraction from ballotgate. I used to think it was Reince Priebus. Now I am a bit afraid to find out. 😦 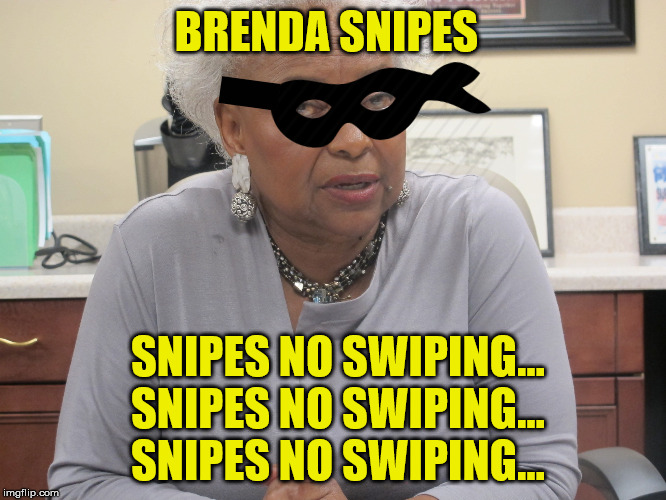 Except if you’re Republican, then it’s common splody head time for the Marxists, like the clock work on an airport runway.

1,172 posted on 11/09/2018 8:53:01 PM PST by RitaOK (Viva Christo Rey! Public Ed & Academia are the FARM TEAM for more Marxists coming, infinitum.)
[ Post Reply | Private Reply | To 1147 | View Replies]
To: Publius
With a standard deviation, Republicans should win as many disputed elections as Democrats, but they don't. That means somebody has his finger on the scale. This will all be exposed.

Trump may not be a mathematician but as a builder, chess player, and one time Casino owner he sure knows about standard deviations and probability.

Aside from FReeQs associating the word “Oracle” with our own FReeQ newspaper, published on our Q threads by FReeQ Bagster, ...
That would be the San Joaquin Valley Oracle, not the lesser company in Silicon Valley. Larry Ellison is a money grubber and only deals with data. Bagster is a patriot and serves up information.

The other I’m willing to wait and see. I was amazed to see even that much nationalist sentiment in the Bartiromo interview with Ellison from one such as he. I am really glad, though that he saw fit to support Nunez. I’m glad he’s not a through and through Globalst and wants capitalism to win.

As a non techie, I have no idea about the quality of his product. I’m certain others out there of you are WAY more informed about Ellison and Oracle than I am.... but I drew my conclusions based on the sources I found for a transitory dig.

I don’t know the reference to “San Joaquin Valley Oracle” - is that another newspaper, or is it another name for our bagster?

Thanks for filling in the extra details!

1,174 posted on 11/09/2018 8:53:38 PM PST by TEXOKIE
[ Post Reply | Private Reply | To 1130 | View Replies]
To: Professional
Awesome video, even if you busted your foot. I regret having come from a family where Dad would not allow any gasoline engines in the garage (except the car). I had friends with mini-bikes, lots of Briggs-n-Stratton and Tecumseh lawn mower engines got repurposed back in the 70s. LOL I'm glad to see that you have the spirit to enjoy life. 59 myself, I started a running career at 52 and ended it at 57. Was fun, but knees don't reproduce new cartilage.

Was fun to be competitive though. I guess that's a human trait - we all love winning. :)

EXACTLY!! That is the case I’ve been seeking to establish! If he’s not THE stealth bomber, perhaps he is an important component of the Steal Bomberage!

WOW!! Thanks for the info on California wildfires and their effect on Hollywood celebrities.

DUTCHSINSE gave an update tonight on the fires. They seem to follow seismic activity and are on volcanic zones.

I picture in my mind's eye a hook and ladder truck, Schumer driving, lights and siren awail, Feinstein steering rear, Pelosi & Waters hanging on the sides for dear life. All chasing a smoke puff. They pull up to Trump's limo and he gives them a wry grin and says "Relax, it was only a backfire!"

In the “wastelands” Blaine had been a high speed computer run train. As the world was destroyed, he continued to run, but also cooked his brain and became evil.

The Kinet, the group of 5-6 got on the train only to be caught up in Blaine’s sadistic games. The group defeated Blaine by making illogical and nonsensical jokes and rhymes.

Blaine was fueled by logic, and the Kinet instead was feeding him jibberish that made him mad and destroyed him.

The Trolls, feed them jibberish, not logic. In fact, that is exactly the approach that is so incredibly effective by Kek, 4chan, MEMEs, npc spoofing....

There, did I do you well?