The Russian people and international observers may not see last Sunday’s presidential election in Russia as legitimate, but President Barack Obama has now officially endorsed the return of Russian past and future President Vladimir Putin.

“President Obama called Russian President-elect and Prime Minister Putin to congratulate him on his recent victory in the Russian Presidential election,” the White House said in a late Friday afternoon statement (read: news dump) about the Friday morning phone call between the two leaders. 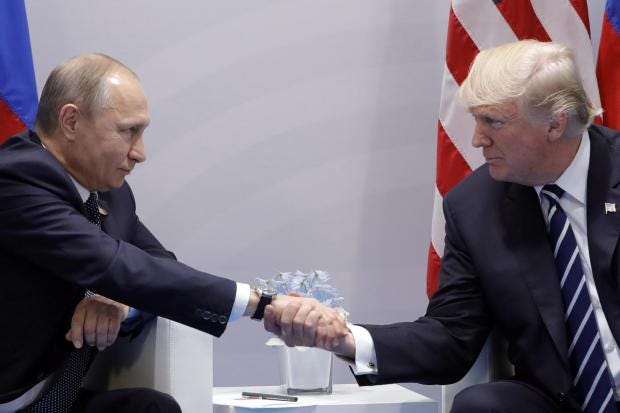 But by far, this is my favorite Obama/Putin Interaction:

It was the sort of conversation presidents are supposed to have on the margins of international summits. No senior aides, no microphones, no notebooks, just whispers. This is where deals are done, and understandings consummated. During a tête-à-tête at a nuclear disarmament summit in Seoul in March, President Barack Obama leaned over and whispered to his counterpart, Russia’s Dmitry Medvedev: “This is my last election… After my election I have more flexibility,” Obama said, referring to the planned deployment of an anti-ballistic missile system in Europe, to which Russia has strongly objected. “I understand,” Medvedev said, reaching out a sympathetic arm. “I will transmit this information to Vladimir.”

I will transmit this to Tayyip

Everything is different and beyond reproach or criticism when Democrats do it. Another example is their use of Farcebook data. The rules are always different for Democrats.

Trump bombed the Russians in Syria.

Obama “bombed” our compound in Benghazi through proxies; pissed on his own Red Line in Syria; backed the Moslem Brotherhood in Egypt; sold out the Arab Spring movement in Iran; let Red China steal us blind; did nothing to stop the No. Koreans or Pakistanis re nuclear weapons or terrorism; sold out Israel; betrayed the people of Cuba; downgraded our military forces and capabilities in the face of a rising military expansion problem by our enemies; and allowed scores of Democrat congressmen and women to stay in Congress when they couldn’t pass a basic security clearance test to clean a congressional toilet.

Not to mentioning hiring all kinds of communists, Marxists, socialists and progressives for his staff and other agency positions.

The difference between President Obama and President Trump is the word TREASON and it isn’t aimed at The Donald.

Less than 2 weeks before the next FReepathon.

We need to finish this one first.

Come on FReepers, let’s do this!!!

Rufus King, who for several years has resided with you as the Minister Plenipotentiary of the United States, having desired to return to America, we have yielded to his request. He will accordingly take his leave of you; embracing that occasion to assure you of our friendship and sincere desire to preserve and strengthen the harmony and good understanding so happily subsisting between the two Nations, and which will be further manifested by his Successor. We are persuaded, that he will do this in the manner most expressive of these sentiments, and of the respect and sincerity with which they are offered.

We pray God to keep you, Great and Good Friend under his holy protection.

Written at the City of Washington the Twenty Third day of November, in the year of our Lord one thousand Eight hundred and two.

Wow! Thomas Jefferson wrote the Declaration of Independence, listing the grievances between the American colonies and King George III.

Here we are, 26 years later, and President Jefferson is praying that God protect his "great and good friend," and is "assuring" America's "friendship" to the tyrant King George III.

How can this be? Shouldn't President Jefferson have known that just 10 years later his "great and good friend" would declare war again against the United States and burn down the White House?

The issue is never the issue

Face it the swamp eels would attack him if he passed gas on the way to the restroom even if they had blocked him from entering.

Did he just Mention God? What happened to that wall sepersting church and stsre we hear so much about?