Wednesday, Nov. 8 marks the one-year anniversary of the 2016 election. On that day, voters took to the polls to vote for their next president, and the majority picked Hillary Clinton. But because of the Electoral College, Donald Trump won in a huge shock. Well, first daughter Ivanka Trump shared some Election Day photos on Instagram this Nov. 8 to recount how she, her family, and the Trump campaign spent that historic day. (Although, technically speaking, Donald Trump was not announced as the winner of the election until Nov. 9, and yes, I'll nitpick.)

In case you've blocked the day out of your memory, the 2016 Election Day started like any other Election Day... except that this one would end with an unprecedented result, whichever side won. Based on basically every poll ever, Clinton was slated to win, with very few questions of that result. Throughout the day, people went to the polls to cast their ballot, and anticipation grew.

That night, the election took over New York City, where both Clinton and Donald Trump were hosting their respective election parties. When the results started coming in, it was all going according to plan. For about an hour. And then everything got twisted. Both campaigns scrambled to prepare the the unexpected results, and the Trump campaign now had to figure out what to do with an unplanned-for victory.

In her anniversary Instagram post, Ivanka Trump details what she was up to throughout that time, with pictures to match. See it here:

At 10:52 a.m. on Nov. 8, 2016, Trump writes, she and her daughter, Arabella, were "in the car on the way to cast our vote for Grandpa!" She included pictures of Arabella and Donald in a car, as well as herself and Arabella walking out of a polling place along with her husband, Jared Kushner. At that point, they're all in fairly casual clothes.

By 8:44 p.m., Trump was "watching the election results roll in." Here, she shared a picture of a room full of advisers, including what looks like Sean Spicer, Eric Trump, and Hope Hicks, along with a bunch of election maps. Trump also included a photo of a larger group of people — including Mike and Karen Pence and Donald Trump Jr. — watching the results.

Next up, at 1:26 a.m., Trump writes, she, her father, her husband, and Stephen Miller were "working on the victory speech." There's a picture of Miller, Donald, and Ivanka Trump in front of a Dell computer in an ornate room. Another picture shows Kushner there, as well.

Finally, at 2:52 a.m., Trump captions, there was "victory!" The last picture in her Instagram series is a blurry shot of her father speaking at a podium in front of the family, who watches him from behind. Tiffany Trump makes an appearance here.

Why do they refer to her as Ivanka Trump? Is she not married to Jared Kushner?

She was real snarky about Trump winning. Is she planning done screaming?

I stayed up all night....me and my Rosary. First election I ever prayed.

When Florida was won, it was only the second time in my life I had seen my father cry. The first was when his mother died.

He told me he never believed he would live to see a Patriot in the WH again in his lifetime.

I have no hesitation in saying it was perhaps the greatest night of my life.

I cannot convey the total wave of relief and happiness that flooded over me that night. I was just about to call it a night when a reporter on CNN said, “Wait a minute! I need to verify something. Come back to me.” I knew something was up, and I stayed with it. I was rewarded minutes later with the glorious news.

I have to admit, I have not felt that kind of euphoria since my son was born.

That’s the only time I saw my father cry....when his mother died.

Your story chokes me up. Thanks for sharing!

(The rumored victory-cake being hurled against the wall would be pure gold).

I dozed off for about an hour after things started looking better for Trump. I was so afraid to let myself get too optimistic. When I woke up, it had drastically changed and I dared hope for victory. I didn’t go back to sleep till about 7AM. I watched the meltdowns with the media with glee. This morning, I watched the meltdowns again on YouTube to celebrate the anniversary.

I suspect she kept her own name when marrying Kushner, as it is her business and brand name, i.e. Ivanka Trump Fine Jewelry and the Ivanka Trump clothing line. 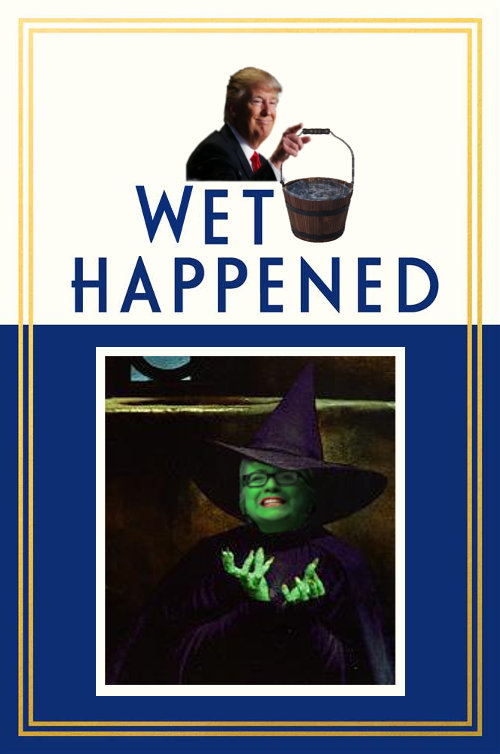 After seeing Zero win twice , I just wanted to know the outcome with some certainity. I deliberately avoided the news until around midnight. After I saw Trump had won I played "Dong Dong the witch is dead over and over again.

I didn’t stay on the election coverage. I would just check in every now and then. It was too nerve-racking staying on it, but I found it a bit hard to concentrate on any other shows or programs.

Now Rush is theorizing that Mooch will run. 2020 election night may be as nerve-racking, but I have a feeling DJT will clobber whoever they run, even Mooch.