At least until the first week of August, it appeared to have been a pretty good year for Joseph Force Crater.

He was 41 years old, a good Tammany Hall Democrat, widely regarded as a comer. Gov. Franklin Roosevelt had recently named him to the state Supreme Court bench. Some felt he was on the fast track to big things, perhaps even the Supreme Court of the United States.

Then he stepped into a New York City taxicab and vanished from the face of the Earth.

That summer of 1930, he was vacationing in Maine. Court was to convene Aug. 25. A phone call seems to have brought him rushing back to the city Aug. 3. He told his wife he had to attend to some business and that he would return to the Belgrade Lakes bungalow in a few days; this was the wife's story, at any rate. On Wednesday night the 6th he had a leisurely dinner with two acquaintances at a W. 45th St. chophouse. Shortly after 9 p.m., he bade them goodnight, hailed a cab and rode away into oblivion.

On Sept. 3, as an embarrassed Supreme Court continued to find itself one justice short and discreet private inquiries into his whereabouts kept coming up dry, cops were finally notified, and the absent Judge Crater exploded across the headlines.

At first it seemed fairly straightforwardly evident that the judge had taken a fast powder to deal himself out of what was plainly about to become a most distressing corruption scandal. Breaking all around were revelations that judgeships were openly for sale in New York. District Attorney Thomas Crain was tracing payoffs directly to political bosses affiliated with Tammany Hall's Cayuga Democratic Club, of which Crater was president.

Visiting Oklahoma? Check Out 24 Destinations in 24 Hours! PAID CONTENT BY BEST WESTERN HOTELS & RESORTS Visiting Oklahoma? Check Out 24 Destinations in 24 Hours! Moreover, it was learned, Crater on the day he disappeared had visited his office, packed his valise with private files and then withdrawn more than $5,000 from several bank accounts. Moreover still, flocks of showgirls began to come forward to attest to their palships with the judge. Indeed, one report had him already en route to the West Indies with a comely plaything.

Other reports had him hiding out at a hunting lodge near the Canadian border. This lodge was owned by one Timothy Quillinan, who was district attorney in Troy and who was also the father of one Francis Quillinan, who happened to be a son-in-law of ex-Gov. Al Smith. This younger Quillinan also happened to be the man who had succeeded Crater at Sen. Robert Wagner's prestigious Manhattan law firm after Crater went to the bench. State police denied they were searching the area for Crater. The head of the force was one Maj. John Warner, who happened to be yet another Smith son-in-law.

None of the leads led anywhere. Crain empaneled a grand jury to dig into bankbooks, telephone records and safety deposit boxes, and none of those inquiries led anywhere either. Mrs. Crater flatly refused to answer any questions. Wagner, for his part, moved swiftly to dissociate himself from the judge, who had long been considered Wagner's personal protege. Why, the senator insisted, he hardly knew the man.

Things remained baffling into January 1931, when the grand jury was dismissed. Then, on Jan. 21, Crain announced that Mrs. Crater had discovered in her Fifth Ave. apartment three envelopes containing $6,690 in cash, $30,000 worth of insurance policies and what purported to be Judge Crater's last will and testament.

There was some question about the authenticity of this document. Detectives who had searched the apartment several times already swore that the envelopes had not been there before. This apparently suggested that someone had recently slipped them into the place past a 24-hour police guard. It was all very mysterious.

And so it remained until June 1939, when Joseph Force Crater there having bobbled up from the abyss no shred of him was declared legally dead.

What had become of Judge Crater? There were always dark suspicions that here was a man who knew too much about something or other and had to be silenced; it was whispered by some that shadowy pols had hired gangster Legs Diamond to do the job himself. Another posit was that he was abducted and slain by a criminal gang disappointed with one of his rulings. Another held that he had simply been the random victim of some stickup man who had then dumped his remains with remarkable success.

Meanwhile, over the years, Judge Crater was regularly sighted in the South Seas, the California mountains, the French Foreign Legion.

As late as 1948, investigators still working the case tracked an ex-showgirl to a Long Island mental hospital, convinced she had intimate knowledge of Crater's murder; she was, alas, a babbling lunatic, and she had nothing substantive to offer.

As late as 1964, Westchester authorities bought into the visions of a Dutch clairvoyant and started digging up much of Yonkers in search of Crater's bones.

New York cops closed the books on the case in 1979.

I would bet he had some dealings with the Mafia.

...he’s under home plate in one of the many parks in NYC

Could Hillary be a time traveler?

There's the answer. Cleaning up some lose ends before his presidential run. Forerunner of the Clintons.

If $5k was all he had stashed away. Back then a person really could disappear.

My money’s still on him being a “loose end” that needed tidying.

Gotta check this out. I’ve been reading about this guy for 40 years. Y’all must read “Among the Missing” by J. Robert Nash. Crater gets a big write-up. That book is best not read alone in the dark, let me tell you. 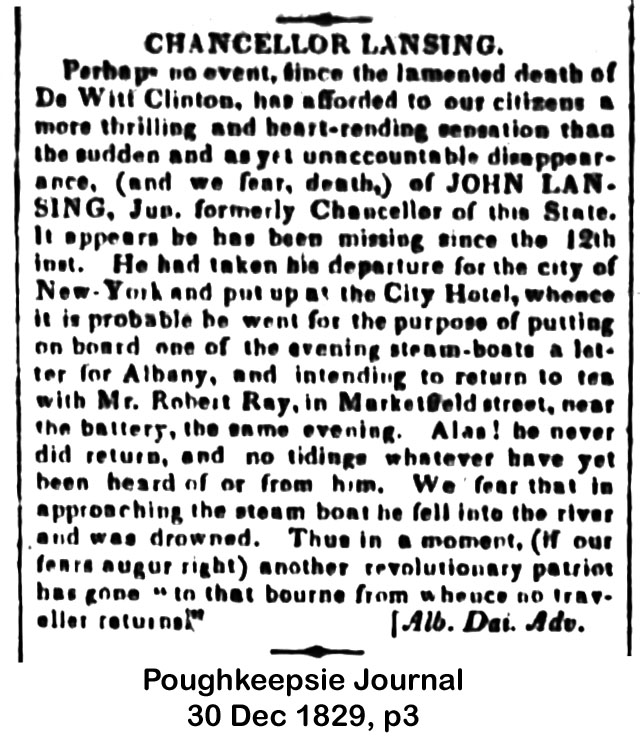 A later article suggested his body had been found in Newark Bay, but I haven't seen anything else confirming that.

Lansing had been a delegate to the Philadelphia Convention of 1787, creating the Constitution, but left because he felt they were going too far from the Articles of Confederation. He was also a member of the New York ratifying convention of 1788, where he fought against ratification.