Widely regarded as one of the best and most influential films of all time, Francis Ford Coppola's 1972 gangster epic The Godfather turned many of its shooting locations - as well as its lead actors - into movie icons.

Visit the scenes of the crimes of the Corleone family in the US and Sicily and you'll discover that they have a few dark - or at least intriguing - tales of their own.

Where it all began. And where Michael Corleone revealed what his father Vito (aka The Don) really meant when he said he made someone an offer he couldn't refuse.

"Luca Brasi held a gun to [the band leader's] head and my father assured him that either his brains or his signature would be on the contract," he told Kay Adams (Diane Keaton) at his sister Connie's wedding reception in the opening scenes.

The dark, English Tudor-style home that serves as the Don's lair - and the site of the reception - is a visual reminder that, for the Corleones, everything is personal. From marriage to murder.

The Corleones were said to live on more fashionable Long Island but location scouts failed to find a suitable house there. Actor Gianni Russo, who played The Don's doomed son-in-law Carlo Rizzi, saved the day when he showed them the house at 110 Longfellow Avenue in the affluent suburb of Emerson Hill on Staten Island - just down the road from where he'd grown up.

The 580-square-metre, five-bedroom home didn't fit Coppola's vision of the Corleone HQ perfectly - most of the wedding scenes were filmed in the garden of the neighbouring property.

Number 110 was owned by the same family for 50 years before selling for US$1.687 (NZ$2.328) million in 2012. The house was put back on the market just three months later, after a renovation, but the listing was removed within a month. It came up for sale again in 2014 with an asking price of US$2.895 million - only to be withdrawn again four months later. According to the listing, the house has a pub in the basement - pretty gangster in our books.

This sprawling, Tuscan-style villa in glitzy Beverly Hills was the site of the film's notorious horse-head-in-a-bed scene.

Jack Woltz (John Marey) - a movie producer who made the mistake of denying The Don's godson the lead in a film he was shooting - awoke to find the severed head of his thoroughbred under the sheets with him.

The mansion-estate arguably has as much star power as some of the film's key cast members. Designed by Gordon Kaufmann, the "starchitect" behind the Hoover Dam in Nevada, the property was bought by publishing magnate William Randolph Hearst and actress Marion Davies in 1947. The couple lived there until Hearst's death in 1951 and, two years later, John and Jacqueline Kennedy spent part of their honeymoon there. The then-future US president loved the place so much he made it his West Coast headquarters during his 1960 campaign.

These days, the property is leased out for special events, which have included Academy Awards, Golden Globe and Grammy celebrations as well as private dinners for the likes of Prince Albert of Monaco and the British Royal Family. It can also be hired for "very selective" weddings, but unless you have a budget befitting its A-list credentials you had better forgeddaboutit.

It was in Sicily, the Corleones' ancestral home, that Michael made up his mind to join the family business for good.

Forced into exile after killing two men who had tried to assassinate his father in New York - one of whom was a policeman - Michael spent two years in his family's namesake town. There, he met and quickly married the local bar owner's daughter Apollonia (Simonetta Stefanelli). When his new wife was killed by a car bomb meant for him, Michael realised revenge is a dish best served cold and embraced his Mafia heritage, returning to New York to take over from his murdered brother as underboss of his family's criminal empire.

The town of Corleone, a real-life Mafia hub, was too built up at the time of filming, so Coppola opted for the mountain towns of Forza d'Agro and Savoca instead. Looking much as they would have in medieval times, it's easy to imagine generations of mobsters chasing each other down the cobbled streets and hiding out in the cavernous churches and catacombs (incidentally home to multiple mummified corpses).

In Forza, dominated by the ruins of a 16th century castle, you'll find the church used in the first two Godfather films. Savoca, a few kilometres north, is home to Bar Vitelli, the stone-flagged drinking hole where Michael asked for Apollonia's hand in marriage and simultaneously threatened Mr Vitelli with an untimely death, and the hillside church where they did the deed. Unlike Pacino, the bar looks just as it did when the scene was shot - down to the curtains over the door. Order a lemon granita - a favourite of the film crew while shooting - take a seat on the vine-covered terrace overlooking the valley and, remembering that this is Mafia territory, keep your friends close (and enemies closer).

Where it all ended. For Vito Corleone at least. In the film, the titular godfather comes full circle, dying in the place where the film began. Somewhat surprisingly, he dies of natural causes, succumbing to a heart attack while playing with his grandson, Michael's son Anthony.

In the novel by Mario Puzo (on which the film is based), the scene is described as such: "He smelled the garden, the yellow shield of light smote his eyes, and he whispered 'life is beautiful'...Yes, he thought, if I can die saying 'life is beautiful', then nothing else is important." His funeral, of course, is a "family" affair of the biological and Mafia kind.

The Roman Catholic cemetery is also the final resting place of many real-life mobsters, including Giuseppe "Joe the Boss" Masseria, once one of the most feared Mafia bosses in New York City. 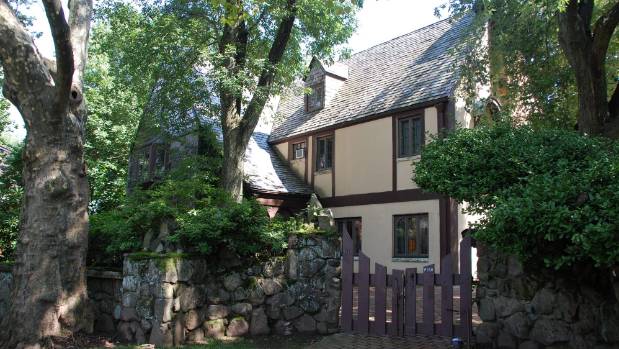 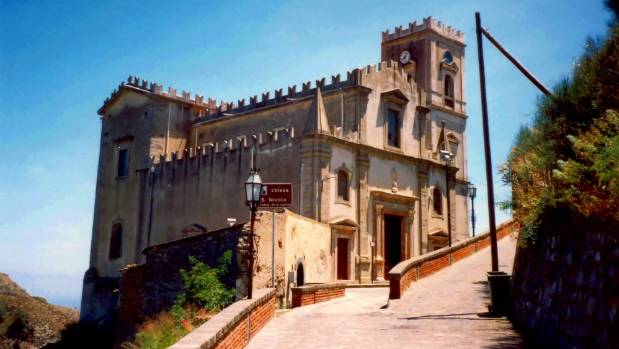 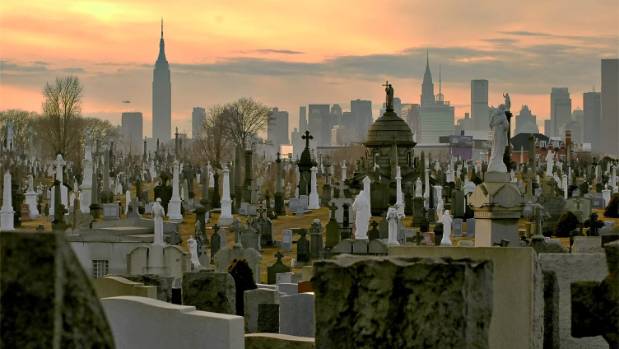 I was in the house in Staten Island in 1969 prior to the movie. The wall was made for the movie. I sat in the kitchen. Our Family owns a Crypt at St. Johns Catholic Cemetery in Queens.

Built by my Grandfather.
Imported Italian Marble, holds 18 Bodies.
The only Bodies in there are my Great Grandparents.

What can I say, we’re New York Italians.

It’s the best in the city;)

I just watched it for visuals as it were. As you may inow it was the last film to use a particular dye process in creating the final print and the colors are lush even in low light.

Rural Sicily sure was beautiful. A shame it has been run by the Mafia for so long.

What’s going on with the other 16 spaces?

Unfortunately for Sonny, there was no such thing as EZ Pass back then.

I did a Godfather tour in Sicily - highly recommended if you get the opportunity....

Who woulda thunk an EZ Pass could save your life?

Nobody wants to be buried in the thing. I mean nobody.
It just creeps everyone out in the Family.

There was talk about selling it, but it has to be repaired to the standard set by Archdiocese and we would have to relocate the Bodies of my Great Grandparents.

The Plots and repair expenses cost more than we can get for it according to the Family that’s still back there. So it sits with our Family name carved in the Marble.

It has quite a History. My Grandfather’s Brother tried to sell it pretending to be my Grandfather. He even had his Parent’s removed and Buried in a Plot without anyone else knowing.

My Grandfather was living in CA and when he found out what was going on he sued the Brooklyn Archdiocese and stopped the Sale.

My Great Grandparents were exhumed to be put back in the Crypt and they were in Wooden Coffins, not the Bronze Coffins my Grandfather had them buried in.

The Coffins fell apart and my Uncle who was overseeing things never got over seeing the Body Parts fall to the ground. It was quite gruesome from what I’ve been told.

There was a lot of conjecture, with my Grandfather’s Brother swearing that he didn’t put the Bodies in the Wooden Coffins and sell the Bronze Caskets.

I think the Archdioceses paid my Grandfather a pretty penny for all the heartache, but I never heard if his Brother was arrested for fraud as he should have been.

Needless to say it was quite the scandal. Nothing like airing my Family’s dirty laundry on FR. LOL

My maternal grandparents are buried in St. John’s.

My maternal grandparents are buried in St. John’s.

>>>My maternal grandparents are buried in St. John’s.<<<

I hope they never ran into my Grandfather’s Brother.
Just funning ya... #;^) 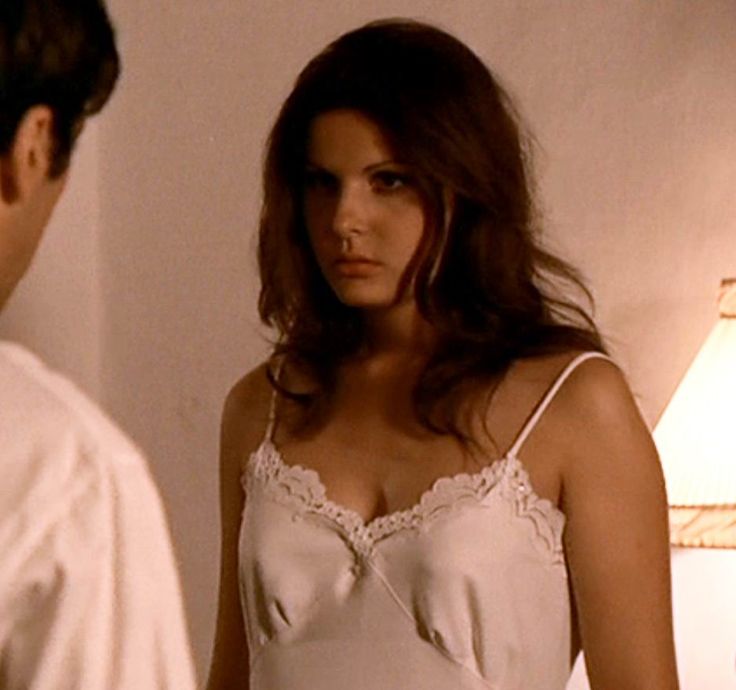