It took Kimberly Vlaminck three long years and nine painful laser treatments to finally look like herself again - her face no longer etched with 56 tattooed stars.

Vlaminck, a 22-year-old from Belgium, made headlines around the world in 2009 after she emerged from a tattoo parlor with an entire constellation inked on the left side of her face.

Initially, then-19-year-old Vlaminck lied to her parents and the media, claiming that she asked a local tattooist for only three stars near her eyes, but he kept adding more and more after she dozed off under the needle.

She looked alright with ‘em. But I think she looks a lot better without ‘em.

There is the zombie man... 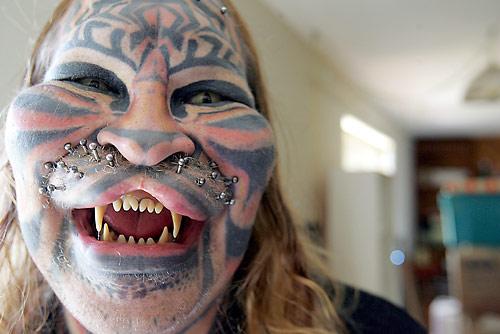 And my all time favorite.."Mr. Cool ice" who I assume got these tattoos just in case people missed the fact that he is cool as ice... For some reason I don’t mind the ‘one side’ face tattoos as much as the whole face jobbers.

As far as face tattoos go, this star thing was not as bad as some.

Why can’t these kids just get a sharpie pen and make it last for a week or two- that’s about as long as they are usually happy with them and before the regret sets in.

I guess I am not one of those who think ANY tattoo is bad. (yes, I have a small one on my arm)

Plus he doesn’t really need to clothe himself, just add some figleaf tats....

This girl is lucky, she’s nice looking and now has a chance at a future. Not all mistakes are as easily corrected.

Another weird tw@t you really don’t want to meet down a dark alley.... Or anywhere for that matter!

Where do people like that work now that there aren’t really any more used record shops?

How does the guy blow his nose or suck on an icecream cone?

Not to mention, Its hard to respect someone that’s into Self Mutilation.

Reports of my demise are exaggerated.

just when you thought the world couldn’t get any weirder... There are some really sick puppies out there

The great thing about freedom is that you get to suffer the consequences of your behavior.

Where is his decorated body going to be stuffed and mounted?

I read somewhere that the Cat Man died.

Now his mother can show her face again.