Iconic radio and TV talk-show star Don Imus, 72, will be back on the air in Boston area on WBNW 1120, beginning Monday May 20.

As part of an affiliation agreement signed last week with Cumulus Media Networks which nationally syndicates Imus, WBNW 1120 will air his show from 6am to 8am. Imus has been off Boston airwaves for more than 2 years now.(BRW 1/11/2011).

Since losing Bloomberg Radio affiliation to Clear Channel's WXKS 1200(BRW 2/27), business/finance-focused WBNW has been filling out its line-up with more talk-oriented shows. In mid-February, it hired former WTKK 96.9 personality Michael Graham to do a 3-hour noon show which he hosts from the station's Needham studios.(BRW 2/5). His show is also heard on stations in Plymouth, Southbridge and Worcester.

TOPICS: Miscellaneous
KEYWORDS: boston; imus; johnbatchelor; talkradio
1 posted on 05/19/2013 6:14:15 AM PDT by raccoonradio
[ Post Reply | Private Reply | View Replies]
To: raccoonradio; Andonius_99; Andy'smom; Antique Gal; Big Guy and Rusty 99; bitt; Barset; ...
Reception areas for WBNW AM 1120, which will pick up Don Imus and John Batchelor starting tomorrow (the Imus controversy led to a suspension of his show in '07 and Howie almost wound up doing that slot a few months later...till the lawyers and judges got involved). Howie Carr list ping

Daytime coverage for AM 1120

Nighttime coverage for AM 1120:

Imus has the best agent in radio. Here’s the formula: Take a mumbling bum out of rehab, give him a cowboy hat and a duck sound effect as props, and put him on the radio and make millions of dollars. Why didn’t I think of that? 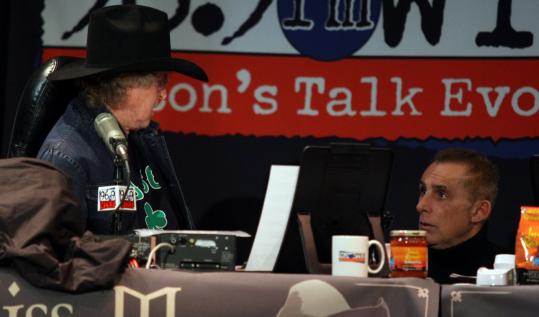 Have a schedule? I hate Imus, am opened minded about Batchelor.

5 posted on 05/19/2013 6:34:18 AM PDT by Lonesome in Massachussets (Doing the same thing and expecting different results is called software engineering.)
[ Post Reply | Private Reply | To 2 | View Replies]
To: duckworth

Why the Hell hasn’t the IRS audited the Imus ranch?

6 posted on 05/19/2013 6:36:00 AM PDT by Lonesome in Massachussets (Doing the same thing and expecting different results is called software engineering.)
[ Post Reply | Private Reply | To 3 | View Replies]
To: duckworth

Imus’ program is pretty weak where John Bachelor’s program is the best show on the air.

He does his homework and books excellent guests.

Bachelor’s voice is not the greatest for radio, unfortunately.

I agree, but unfortunately, he's been gone from the Los Angeles market for about two years. During the time he used to be on, I listen to music because his successors are so bad.

Basically they’re running Imus 6-8 am followed by financial stuff till noon, Michael Graham till 3, liberal Jeff Santos for an hour, then I guess more biz till 9 pm when Batchelor comes on. The website is part of moneymattersradio and has yet to reflect the changes (including the fact that thanks to 1200 they no longer carry Bloomberg stuff)

http://www.moneymattersboston.com/page.php?page_id=371
(again not accurate!) Also that may be for the entire Money Matters network including the stations in Plymouth and Southbridge, but Imus and Batchelor will be on the Concord-based WBNW 1120 only.

The station originated as a folk station with call letters
WADN as in “WAlDeN Pond”.

You can download his podcast & you can also find him on a couple of Internet radio stations. I usually listen to Batchelor on WPRO.

I agree, but unfortunately, he's been gone from the Los Angeles market for about two years. During the time he used to be on, I listen to music because his successors are so bad.

You can pick up Bachelor on the internet. "TalkStreamLive" is a desktop gadget I use to listen to my favorite radio programs. You can also download a smartphone app and listen there.