Navigation: use the links below to view more comments.
first previous 1-20, 21-39 last
To: PGalt
(Has anyone seen Liz lately)

I'm curious, and even worried, about Liz. I hope she's just off on a long vacation. She hasn't posted in months, whether art or other political comments. Maybe she's just gotten really busy. If anyone knows anything, please let us know too.

Aachen was delightful. We stayed at a hotel right next to the old medieval gate to the city. It is very nice for walking around. They had a public art display that consisted of fiberglass horses decorated in various ways like the cows on parade in Chicago and Kansas City. You never knew when you would come upon one. We took the train from there down the Rhine to Heidelberg which I just adored.

Had Dürer never seen a lion? He had clearly seen a Corgi or similar type European herding dog . . . but maybe there weren't any lions handy, or just a badly stuffed example?

You're right about the time period. I guess I kind of lumped everything from the 1400's to 1500's as part of the Gothic era.
My personal fav engraving that he did is "The Knight, Death and The Devil". His self portraits and paintings of nobility and peasants were all hightly detailed.

24 posted on 10/08/2005 11:10:33 AM PDT by wolfhound89 (Are we Americans or American'ts?)
[ Post Reply | Private Reply | To 20 | View Replies]
To: Republicanprofessor
My daughter had a blast! She lived with a Spanish family, and then hiked the Camino . . . met tons of interesting people, took hundreds of pictures (we sent her with a tiny little digital camera that easily fit in her shirt pocket, and a BIG memory card), enjoyed herself very much.

I need to put her pics up because they're fabulous.

25 posted on 10/08/2005 11:11:24 AM PDT by AnAmericanMother (. . . Ministrix of ye Chace (recess appointment), TTGC Ladies' Auxiliary . . .)
[ Post Reply | Private Reply | To 14 | View Replies]
To: Republicanprofessor
I got the impression that Chartres also marked the transition between Romanesque and Gothic. The facade is part Romanesque, since (I believe) it may have been re-used from an earlier Romanesque church on the same site. Also unique to the sculptures on the outer walls of Chartes are the alleged clues to the location of the Ark of the Covenant, mentioned in Graham Hancock's book, The Sign and the Seal. When I was there a few years ago, much of the outside was not able to be viewed due to restoration scaffolding. However, the book checked out with what I could see of the sculptures. Also when driving to Chartres from Paris one sees it in the distance long before the other buildings in the town-- it is very prominent in its setting, no doubt reflecting its relative importance all the way back to medieval society.

At Notre Dame, it is interesting to visit the towers, where you can see that they are partially constructed of massive wooden beams (to save weight over stone).

I am under the impression that the difference between English Gothic and French Gothic is the color of the glass. The French used much more blues and reds than the English. In many French cathedrals, the glass was taken down during WWI and again during WWII to protect it from being destroyed by war.

St. Denis remains on my list of places to visit in the future when I get a chance.

26 posted on 10/08/2005 5:24:05 PM PDT by SteveH (First they ignore you. Then they laugh at you. Then they fight you. Then you win.)
[ Post Reply | Private Reply | To 1 | View Replies]
To: SteveH
I would also like to visit St. Denis, but I think the original choir is now completely overshadowed by the newer nave and clerestory of the High Gothic period.

I don't know that I would call Chartres Romanesque. The facade dates from before 1194, the date in which there was a fire that destroyed all but the facade and one bay of the cathedral. Since the Gothic style was born in 1144, I think the facade is still Gothic, but definitely Early Gothic. The arches are only barely pointed, and the facade is not nearly as busy as later cathedrals (like Amiens or Reims). The arches are also "recessed" into the wall, rathe than projecting out. But because of the rose window (even heavy as it is with stone) and the pointed arches, it is definitely early Gothic. But I don't know about any previous church on the site. It does dominate the sky line, but so did any of the cathedrals of the time. They showed how important God was to the town (vs. what our commercial skyscrapers say about what is important to us nowadays.)

Reims Cathedral, a busy High Gothic facade with stained glass at the tympanums instead of sculpture. Very lovely.

I haven't ever been up in Notre Dame's towers. Interesting point about the use of wood. They were originally to have pointed caps on them but, as was often true, they ran out of money.

It is true that they took the stained glass out of the churches for both world wars. Chartres is the only cathedral with all (or most) of its original stained glass.

There are actually three different styles of English Gothic: Early, Decorated and Perpendicular. English Gothic is more horizontal and, in its later styles, has some of the wildest vaulting I have ever seen. 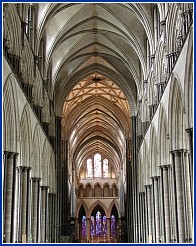 Salisbury Cathedral, Early English Gothic. Note the more horizontal emphasis, inside and out. Chapel of Henry VII, Westminster Abbey, 16th century. The Gothic style lasted longer in England than anywhere else. This is now the perpendicular style; note the "stalactite" vaulting.

You posted some beautiful photographs, RP.

Yes, IMO, the analogy between Christian abstract and 20th century abstract is apt, ironic as it may seem.

I find a wonderful combination of delicacy, ethereality and solidity in Gothic architecture, I truly love it. Been to Winchester, Salisbury, Rheims, Notre Dame and Chartres, though it's been years. They left an impression on me. Knowing a little of the history of those places and the events and culture of the time makes them all the more fascinating.

OTOH, I'm just (re)learning Romanesque, after inadvertantly posting an example, so thank you so much for the thread!

28 posted on 10/08/2005 7:35:58 PM PDT by Sam Cree (absolute reality)
[ Post Reply | Private Reply | To 1 | View Replies]
To: Republicanprofessor
I made high quality prints of most of the paintings and printed your post out for me to read while students looked at the prints, and then we all discussed them.

Art appreciation, it turns out, is a great aid to reviewing the basics in a much more attention-keeping way than other themes I tried. Students are more interested in talking about composition, values, relationships, and elements of famous paintings, plus it all applies to their own work. It's been a lot more fun for them and me.

I started the summer series with the 19th century Realism of Manet in the 1860s because that's where the development of abstraction begins: with the flattening of the picture plane. (After all, after the invention of the camera in 1839, painters were freed to move away from realism.) I wanted to show the reasoning behind abstraction for those who dismiss it too quickly.

I was originally a little nervous about the series. Now I can't imagine that that was true. It's been so much fun.

I think that when one teaches art, you really need to add art history to the studio classes. One of my colleagues also adds studio projects to the art history classes (like drawing perspective) but I have so much to say about the art history that I just don't make time for it. But I do show cubist, expressionist and surrealist slides for my painting classes and a variety of other things for my drawing classes. As you noted, it makes their own art so much richer.

Well, you were the inspiration for this post; I'm so glad you've enjoyed it.

It's been a few years since I was in Paris. Too many people miss La Ste-Chapelle, with all that lovely stained glass, and it's just a 10 minute walk from Notre Dame.

I am always amused by my trip to Notre Dame with a group from school when I was 14. I wanted to become Catholic! The mystery of confession and the huge cathedral, were overpowering. Of course, that's just the reaction they wanted in the Middle Ages. (I never did convert; I realize now that I fell in love with the art and architecture, and to that I've remained addicted.)

31 posted on 10/09/2005 6:48:56 AM PDT by Republicanprofessor
[ Post Reply | Private Reply | To 28 | View Replies]
To: Republicanprofessor
As with the sites of many if not most European cathedrals, the site of Chartres was previously known as a pagan (Druid) worship site. A sacred spring was believed to have run under the ground on which the Druid altar once stood. (It is also interesting to contemplate Chartres in relation to "ley lines".)

Apparently the facade was built around 1155. I can't find my book on Chartres but I vaguely recall there being some Romanesque elements (cylindrical columns, round arches in the center) mixed with Gothic elements (Rose window, pointed arches under the towers).

However, even the rose window could be viewed as displaying the Romanesque cylindrical column theme between the interior "petals."

(Did you walk the labyrinth?)

I also liked the Sainte Chapelle church next to the Notre Dame in Paris for its stained glass windows. Much prettier than Salisbury or Westminster (to my taste)-- more fundamental colors, less pastels and yellows.

I would speculate that the use of wood in Gothic cathedral towers might be common and not just specific to Notre Dame in Paris, to save weight, but it would be nice to hear or read confirmation of that.

I've added you to two ping lists: my main Art Ap/Education ping list for these series of "lectures" and also to the general, fun art ping list.

I love your name. I've enjoyed "your" novels quite a bit.

Thank you! What fantastic threads.

Indeed. MacCauley's books are my staples for teaching. Or at least the videos, especially when I am ill. Cathedral is one of my favorites. Pyramids is also good.

Please add me too.