Here we go again. And as you will see from the Western media reports, the French authorities will be blamed. “Islamophobia” and “racism,” right. These Muslim immigrants should be applauding healthcare workers, first responders, etc.; instead, they are tearing up and tearing down society.

In Eurabia, Islamic scholar Bat Ye’or explained how decades ago, European governments agreed not to press Muslim immigrants to assimilate. What did they think was going to happen?

Tension with the police erupted again on Monday evening in Villeneuve-la-Garenne near Paris, where a motorcycle accident involving the police had provoked the first clashes with residents two days before

Paris has seen a second night of riots break out over police ‘heavy-handed’ treatment of ethnic minorities during the coronavirus lockdown.

Anger erupted in the French capital last night and during the early hours of Monday morning over alleged ‘racist’ police attacks. In response, police used tear gas and baton charges in Villeneuve-la-Garenne, northern Paris, on Monday morning as fireworks exploded in the street. Armed police were seen moving through the area as groups of protesters congregated. Fireworks were again seen being launched at police last night as heavily armed riot police took to the streets of Paris. It comes after a 30-year-old was critically injured in the neighbourhood in a collision with an unmarked police car.

Riots have broken out in the Parisian suburb of Villeneuve-la-Garenne following allegations of heavy handedness against ethnic minorities by police forces. Protests continue in Paris over police attacks on minorities

President Emmanuel Macron has extended France’s social distancing measures until May 11. Its daily death toll from the virus fell to the lowest level in three weeks today as 395 deaths were recorded, bringing the total to 19,718, though deaths are typically under-reported over the weekend. Fireworks dyed the sky red above the Parisian suburb early this morning, videos posted on social media show. Bins were also filmed blazing and filling the air with smoke as armed police moved into the area. Videos of the trouble posted by the French journalist Taha Bouhafs, who is from an Algerian background, includes one of him being manhandled by police – leading to allegations of racism. Mr Bouhaf’s earlier images show tear gas canisters being fired by the police, who were hit my numerous fireworks. The early morning violence followed prosecutors opening an enquiry after a 30-year-old motorcyclist was critically injured following a collision with an unmarked police car in Villeneuve-la-Garenne.

CNN announces "France's Macron positioning himself as leader of the world"

take your medicine, france…. then hopefully... take out the trash.

Deport Islam, save a civilization.

I wonder when the Frenchies will have had enough of these hosers? 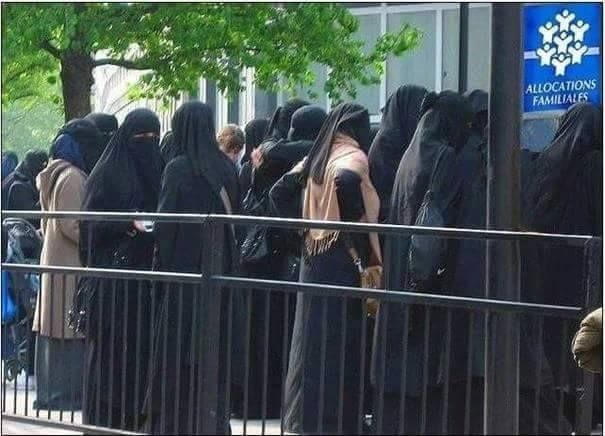 There’s a cycle to these things. They start as friendly shop keepers until their numbers get sufficient to start making demands. Then as they grow their demands get more extreme and they get violent. Eventually they have the numbers to go full revolution and that’s the end of the country as a free nation. France is well on its way down this road and I think it’s too late to get off it short of expelling them all. But they won’t go peacefully.

Send them back to their Islamic $hithole$, or

Given past performance they’ll probably...

Islam is a Disease, and should be treated as such and Eradicated from the Planet.

I don’t blarme them. Americans gotta American, and this will be happening here soon unless they open up and let us go back to work and to church.

Ramadan begins this Thursday at sunset ... things could get more than a little dicey ... and not just in Paris.

Just cordon off that part of the city and open it back up at a later, unspecified date.

If thye don’t like how they are being treated let them deal with their own problems themselves.

I lived abroad briefly in Asia, and I knew a proud French white-collar expatriate and his family who were also stationed there. They were proud to be French in all regards.

When it was time for his daughter to attend university, I said “why not send her back to France, where it’s free.”

He looked at me like I was insane. “What? I would never send her back to France now.”

Lol! France...fight.... bwaaaa! They will fold to muslims faster than Superman on laundry day. UK is gone, Paris is next, then us!

They are still working on all kinds of schemes for “integration” or more cynically “pacification." It works for a few, but not the many. What they have created in their own country is a distinct, permanent ethnic and religious underclass WHO HATE FRANCE.

Sadly, It won’t be resolved without war.