WASHINGTON: Each Democrat candidate seems to try and top each of the others with a proposal for more free stuff. From health care to college to guaranteed income, the free that resonates with the mini-mob of the day. President Trump says its a race to who can give away the most stuff, and raise taxes the most.

Voters are overwhelmed with an onslaught of vote for me and get it free.

Freedom from debt, or the need to sow what you reap, now replaces our Constitutional Freedoms as a talking point.

This sort of mindset of mendacity flows from such high sounding things as the one-man-one-vote nonsense.

The idea that anything is free is the lunacy of a democratic society. Because someone, somewhere is expected to pay it.

It is only barely ironic that late night talk show host refer to America not as a republic, but a democracy. However, those comedic pundits never explain, because they don’t know the difference. Often these legal experts or loyalists to “one nation” under God babble on about some misdirected view that tangles them in nonsensical gibberish such as “democratic republic” or “constitutional republic.”

Some even stumble around in the concept of federalism without a clue (it seems). Phrases like a Democracy or a Constitutional Republic are their way to tinker with the idea of a republic. However, without going off the far-right deep end to deny anyone the “right” to vote. Citizenship be damned.

Why would Democrat candidates do anything else but offer a free-for-all lifestyle? After all, they are kowtowing for votes from teenagers, illiterates, welfare recipients and in the future (if a couple of candidates have their way), convicts. ((Bernie Sanders says everyone deserves the right to vote — even if you’re in jail)

Talk to any college (18-22) student. They are mostly idiots. Tragically sending them to college only apparently worsens their acuity. Go to school for five years and start your professional life $100,000.00 in debt?

‘Bernie Sanders wants to wipe out all college debt. Removing any barriers for any person wanting to attend college.

We should make what college free for all.

All college? Ivy League colleges? Only free if you attend your local state college?

A person is considered to be illiterate if the person cannot read or write a simple message such as instructions or inventory lists even though the person can sign his or her name. Watch any “man-on-the-street” interview by someone like Jesse Watters. There are numerous ignoramuses running free on the streets with a right to vote.

Some cannot recognize the founders much less spell the name of the candidate they support.

Their vote is not about what is best for the country, but what will give them the most.

So, what is the wonder that communists and socialists have thoroughly infused our Democrat / liberal party? They rile the mob and promise anything and everything, knowing full well they cannot deliver.

A republic? A government where the sovereignty rests in the people. However the people’s will is expressed in the rule of a “qualified majority.”

When her mother decided to surprise her at school a day early, she had no way of knowing the kind of situation they were about to get themselves into

There must be more to this “article” than this. Please post it all.

Thanks Admin. For cleaning up this newbie mess.

Many kids and young adults honestly think--when they think at all--that money earned but not spent is just stored in mattresses or sitting in warehouses waiting to be redistributed by the Bernie Sanderses of the world.

What is this crap article about? This is terrible writing.

Now, either banned or suspended. 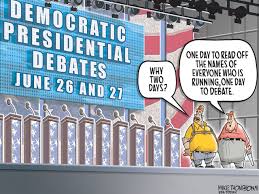 Looking at his posting history, all he did was post blogs. He never responded. Not good freeper etiquette.