The collapse of the New York Daily News could not happen to a more deserving enterprise. The editors abused their power and debased the public discourse with cover pages that increasingly ridiculed the President of the United States, finally depicting the leader of the free world as a pile of poo poo.

I get that they had the right to do that. I vehemently argue against what they did, and now having bored their sugar daddy billionaire, the editors find themselves adrift and unemployed under new owners who will not subsidize their infantile behavior.

Staffs at other papers are rallying to the Daily News cause because they know they are next. The purpose of a newspaper is to make money for its owners. Many now fail.

"Layoffs at the Daily News mark a grim day for New York City," read the headline of an editorial in its rival tabloid, the New York Post.

Nearly 40 years ago, the Post was salvaged from the scrap heap by Sir Rupert Murdoch.

The editorial did not explain why it was grim, but Daily News editor-in-chief Jim Rich, the man who approved the poo-poo cover and others like it, tweeted after being canned, "If you hate democracy and think local governments should operate unchecked and in the dark, then today is a good day for you."

I had to laugh. Most local newspapers are lapdogs, not watchdogs. Remember how the national press treated Obama? That's the default setting for local coverage -- as long as the mayor gets along with the publisher.

How tough was the Daily News? New York City Mayor Bill de Blasio tweeted, "It’s no secret that I’ve disagreed with the Daily News from time to time. But Tronc’s* greedy decision to gut the newsroom is bad for government and a disaster for NYC. Tronc should sell the paper to someone committed to local journalism and keeping reporters on the beat."

Tronc bought the newspaper for $1 last September. It overpaid.

I don't wish to tell tales out of school about my own experiences in journalism, but suffice it to say Ali Watkins of the New York Times is not the only reporter to sleep with sources. The rugs bulge at some newspapers from all the stories swept under them.

OK, I will share one incident. A few years ago, the Pittsburgh Post-Gazette broke the story of West Virginia Governor (now Senator) Joe Manchin arranging for a fake college degree for his daughter, a scandal that forced the resignation of the man Manchin appointed as president of West Virginia University.

Years later, the man who had the story told me he shopped it around to West Virginia newspapers but no one would do the story. He is one of the most respected men in the state capital. He confirmed what I had suspected.

Meanwhile, the state is undergoing its first impeachment proceeding in 31 years. Back in 1987, Fanny Seiler of the Charleston Gazette broke the story that Treasurer A. James Manchin lost $279 million in the state investment pool through reverse repurchase agreements. He resigned in the face of impeachment.

Now Supreme Court Justice Allen Loughry (who literally wrote the book on corruption) is facing impeachment as well as a 22-count federal indictment for trying to steal everything that wasn't nailed down at the Capitol, including a Cass Gilbert desk.

Taking the Cass Gilbert desk was like Randy Quaid stealing $40 from the polio fund in "The Last Detail."

Who broke the Loughry story? Kennie Bass of WCHS-TV, Channel 8, and WVAH, Channel 11.

The town had two newspapers 31 years ago. Now it has a half-staffed combined newspaper. That's economics.

But the local television stations have beefed up their staffs and expanded broadcasts. Tim Irr at WSAZ, Channel 3, and WQCW, Channel 30, is on the air almost continually from 4 p.m. until 11:30 p.m.

The TV stations go where the local ad money is. It no longer is in afternoon cartoon shows -- or newspapers. Car dealers sell more cars by advertising on local TV news, and local TV news has greatly improved.

Yes, we will miss the fading clips from the newspaper. But one nice thing is Kennie Bass has the justice lying about his sticky fingers on camera.

* From Wikipedia: Tronc, Inc. is an American newspaper print and online media publishing company based in Chicago, Illinois. The company's portfolio includes the Chicago Tribune, the New York Daily News, the Hartford Courant, the Orlando Sentinel, Ft. Lauderdale's Sun-Sentinel, and The Baltimore Sun. 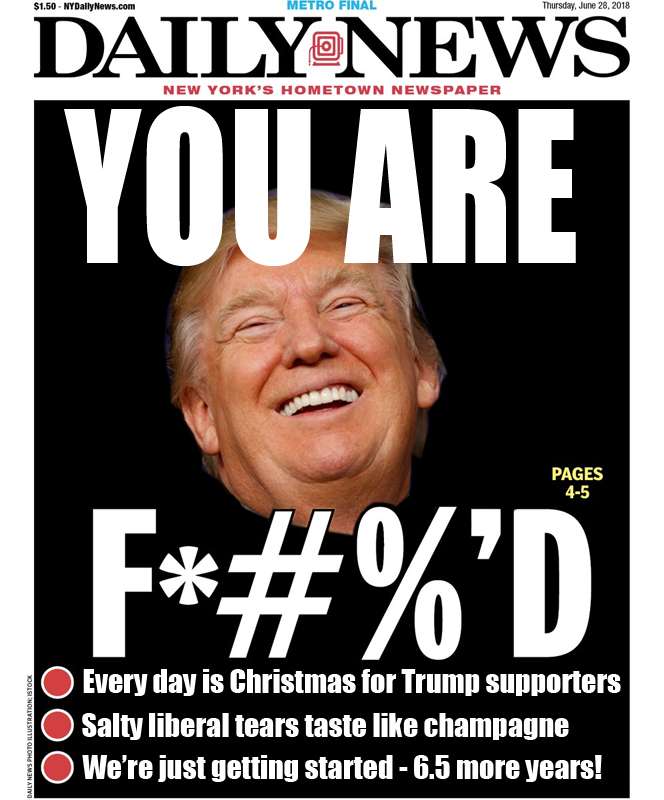 It would be better if it were the Slimes. The Post has a style similar to the News:

5 posted on 07/24/2018 9:36:40 PM PDT by SunkenCiv (www.tapatalk.com/groups/godsgravesglyphs/, forum.darwincentral.org, www.gopbriefingroom.com)
[ Post Reply | Private Reply | View Replies]
To: upchuck
The purpose of a newspaper is to make money for its owners.

Still, I miss being able to read my dead-tree Washington Times while drinking coffee.

I think up until the 1990s...when AM talk radio came along, with the emergence of the internet....the newspaper crowd thought that they could survive on with just the competition of TV.

But along came Rush....the suggestion that various news pieces were faked-up and fed throughout the nation...that started the downfall. Then the internet just clobbered the remainder of trust that newspapers had. My regional paper where I grew up as a kid....went several years ago to three productions per week. They probably can survive at that rate, but if you asked people if they read the local paper....it’s probably less than twenty-percent now.

I’ll predict by 2030...the bulk of remaining newspapers only print in digital form, and probably three to four times a week. If you were smart, you’d gear your whole paper to local news, local crime, and local people. It’s like chatter on Friday night high-school games....there ought to be two whole pages in a local paper covering the dozen regional teams and their players.

The smartphone killed the newspapers because you could bring it into the john for your morning duties - and get a lot more news. I honestly haven’t picked up a paper since the smartphone, for that very reason.

All newsrags could be shuttered today and it would be a wonderful thing.

The media can’t get over their failure to put Hillary as the first woman president in office, after all they successfully put an unvetted American mulatto in the oval office as the first negro American president. Now they seek revenge on the American voter that defied their bidding by electing Trump. As for print news, even my local rag is anti Trump, so good riddance.