This development invites attention to Google’s broader military contracting ambitions — especially since Boston Dynamics is the eighth robotics company that Google has bought in the last six months.

In 2012, Google hired Regina Dugan, the head of DOD’s Defense Advanced Research Projects Agency (DARPA), DOD’s in-house “moon-shot” idea factory. At the time a Google spokesperson said: “Regina is a technical pioneer who brought the future of technology to the military during her time at DARPA. She will be a real asset to Google.”

Simply, few people could have a better insider knowledge of the U.S. military’s future technology needs that Google could exploit than Ms. Dugan.

Third, Google has a long history of working for, and with, the NSA and the other U.S. intelligence services.

In 2004, Google purchased satellite mapping company Keyhole, which was strategically important enough to be funded by the CIA’s investment fund In-Q-Tel.

Google turned the aptly-named “Keyhole” surveillance capability into the wildly popular Google Earth and Google Maps service used by over a billion people and over one million websites.

I ran into an interesting situation on a military contract. Suddenly the Navy wanted all the intellectual property delivered. We were startled, to say the least. A company had gone full-hippie on them. They’d decided they didn’t want any of these hideous Navy contracts as those were evil. They stopped supporting all the equipment they’d delivered and refused to deliver the intellectual property. The Navy went to court and lost. Suddenly, they wanted all the IP on everything they’d ever bought. We complied with no loss of business. But if Google goes full hippie on the military it could be much worse as they might sabotage rather than retain.

Skynet; thy name is Google.

Google is a wholly owned subsidiary of the government.

The Daily Bell did an analysis of Google’s business model and financials and surmises that they do not make the money they have and it is given to them by our government and others. 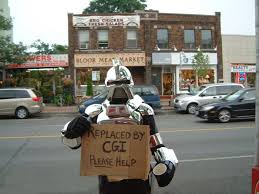 What Good Can a Handgun Do Against An Army?
http://www.freerepublic.com/focus/f-backroom/2312894/posts

And the clintons were the most ethical presidents ever.

And the obama administration is the most transparent ever...

Of course the implications are a matter of whether the vendor can commercialize the technology that they are designing and building for the government.

Normally, whichever side, buyer or seller, has more “clout”, will succeed in negotiating for themselves.

If a consulting firm is hired to develop a product, normally the attorneys for the purchaser insist that purchaser will have all the rights to what is developed. Which makes sense, since, to begin with, the idea itself is a requirement that purchaser came up with. If I commission a work - I “should” be getting the whole work, including the rights to further commercialize it. A few years back I bought just such services and made sure that the contract stated that all the work product was mine, just as if employees had built it. Otherwise there would be no sense to me paying for the work.

But often if the end product is something very valuable and it’s a big project, the deal is given to a “sweetheart” company anyway. So to throw them a bone, their purchaser, being buddy-buddy, allows them to have a contract where they keep the rights.

Knowingly or unwittingly, IBM threw Microsoft such a bone back when they first contracted for DOS (which Microsoft did not initially develop but purchased anyway, reportedly for a flat $50,000).

It may well be that the consultant conceived of a great idea - so the idea was not the government’s initially - and they wangle the deal so that they have the government paying them to develop the idea, and retain all the rights to the idea. Of course, it seems quite fair in that case for developer to keep the rights to their own idea, however, IMHO, the government should not be funding it’s development, since that is often far more expensive than licensing the idea once its commercialized. Certainly in cases where the idea has something to do with espionage or weaponry, however, the government would much rather that it pays for all the development in return for perhaps having influence in keeping the eventual commericial versions of the product inferior to the government version, or perhaps not as secure, etc., in theory so “enemies” of the US can’t acquire a version as good as what the US government and selected allies are allowed to have.

As far as google going hippie, they’re Stanford (new world order school going way way way back), so they’ve been working for new world order all along, regardless of how aware they were or are.

While sometimes the US government “loses”, new world order never loses on deals that are really important to them. Certainly the top IT companies are well within the orbit of new world order (via boards of directors, projects, industries, customers, etc.), which is why they all go along with all new world order major strategies and are always there to provide technical products and services for any “special projects”. This relationship goes way back in US history, of course. They are all inextricably intertwined with Wall Street as well, so it’s not like they ultimately have much choice.

If new world order finds a company too obstinate to help them, ultimately they can always finance a competitor and replace them.

Technology, heavy equipment, munitions, etc., are all part of global finance and trade that new world order transacts (or permits to transact) with both sides of every conflict before, during and after wars.

As long as google keeps the US intel community happy, the diplomatic, intelligence and financial communities of the US and the UK will be backing them.

Of course, publicly google would want to try (though that’s kind of difficult now) to present itself as being the freewheelin’ “do no evil” nothern california thing, so public tiffs with the governments and intelligence communities may happen periodically. In the long run, however, such events would, IMHO, be either superficial or part of normal disinformation efforts. When you think about it, even the judicial system is part of the puzzle, and from Top to bottom, it’s pretty much NWO’s lap dog.

I’ve been told by a former DoD and Navy guy that this die was cast back when Google bought Keyhole. What we came to love as Google Maps is the civilian “lite” version of the mapping tech that is core to the modern military.

12 posted on 01/11/2014 5:20:11 PM PST by bigbob (The best way to get a bad law repealed is to enforce it strictly. Abraham Lincoln)
[ Post Reply | Private Reply | To 1 | View Replies]
To: PieterCasparzen
This is how Google survives the coming economic collapse: being a wholly-owned subsidiary of the US government's tyranny-enforcement arm.

And we are financing this.

Take Google with it's unlimited current knowledge, and intrusive android operating system ,..
Add the "were here to help" Government with its unlimited NSA knowledge of who we contact and associte with ..
and then what do you have .. ??
Answer : Orwell's 1984 ,.. with no conscience, responsibility, or accountability !!

If Google becomes seen as just an expensive tool of the Government, this may encourage competitor search engines to form and as a selling point, tell every body; We do not belong to the Government.

Interesting - do you have a link please?

This isn't exactly like the heyday of Lockheed's Skunk Works, which anticipated the needs of the DoD and developed technology they couldn't refuse. But Google's moves aren't that different, either. The problem is, the US needs regime change.
18 posted on 01/11/2014 7:32:42 PM PST by SunkenCiv (http://www.freerepublic.com/~mestamachine/)
[ Post Reply | Private Reply | View Replies]
To: Chickensoup

What is the DAILY BELL?