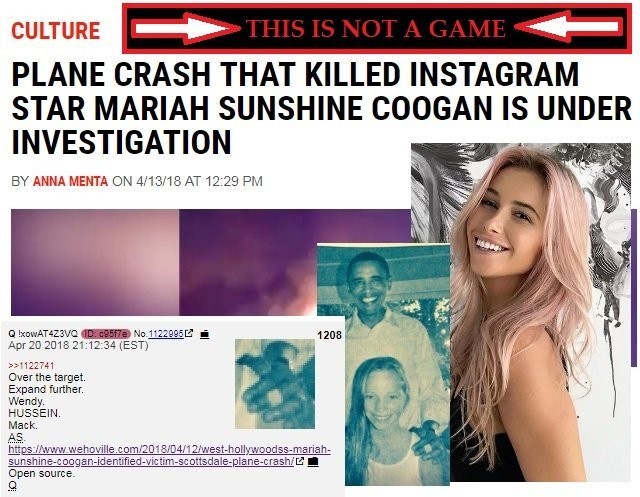 Note anything about his finger in the close-up?

Joe Digenova on Brett Baier’s “Muller Report” show tonight said that he understood POTUS and others were huddled at the WH planning the DECLAS.

The issue isn’t myself, but simply a report of a seemingly surreal experience, in part happenstance encounter with somebody appearing as the celebrity incognito, then doubting the experience, only to reconsider it as too strange not to have been true. Consequences if true, seemed Q-like.

“I’m posting Martin Geddes’ article since some people might miss it by not clicking the link. Seems to be a good summary/overview for those who may not be totally up to speed, so might be good to share. I hope he is right especially about the gallows. Thanks for posting it!

[There appears to be an image half way through but it is merely a black box to me.]

Enemy of the people:
the “Russian collusion” hoax

I took most of the last two weeks off work because the stress of waiting for the “big event” was getting to me. Right as the wheels of my plane touched the tarmac on Friday evening in London, the key finding of the Mueller report on election interference was released to the public: no Americans will be prosecuted for any crimes related to “Russian collusion”. I have spent the weekend enjoying both the spring sunshine — and the relief of proof that I am standing on the right side of history.

Civil wars don’t just happen — they are carefully planned. We have just collectively dodged the political assassin’s bullet aimed at the lawfully elected President of the United States, and by proxy the free world. Make no mistake: this was the treachery of Dealey Plaza replayed, but using memetic weapons in place of kinetic ones. The media have been gaslighting the public with lies in a seditionist plot.

Donald Trump and Patriots in the US military are reversing the multi-stage infiltration and hijacking of the American Republic that has been undertaken over the last two centuries. To understand that process is beyond the scope of this essay. Suffice it to say, if this coup attempt had succeeded‚ it would have installed in the US a dictatorship of the most vicious and dangerous nature. Tyranny would have taken full hold over the levers of state, to abuse at will.

The consequence would have been a definite bloody public uprising, and a probable split of the US military between Patriots and Globalists. I personally — as a British-born Patriot and dissident — would have been in great danger. Thankfully, that timeline is not the one we are now set upon. Instead, we will see a Biblical fury unleashed as traitors and criminals are rooted out to face the most severe justice. Many will go to the gallows. Be prepared for televised scenes this year unlike anything you have met before.

We have seen the evidence drip out over the past two years of how the “Russian collusion” narrative was fabricated from nothing. It has been known since last summer that Mueller could not possibly be investigating “Russian collusion” by President Trump. The media has spent two years actively pushing a “conspiracy theory” they knew was false, designed to reverse the outcome of the 2016 election. They are doomed.

Now do you understand why the QAnon military intelligence project was needed, and why the media has been implacably opposed to it? The entire mass media has been allied to an international criminal cartel that has been working to take over the United States of America. This cartel had already taken over virtually every major institution — including the Presidency — for decades. The last few bastions of honour in the military have save us from violent catastrophe. You should be giving prayers of thanks to many unknown warriors.

In the short term we will see an unfolding of drama that prepares the public for the traumas and outrages to come. The Inspector General’s report and Declassification will lay the groundwork for Huber’s prosecutions for FISAgate. There are tens of thousands of sealed indictments ready and waiting — with the unsealing having already begun. The US military is already very busy fighting “enemies domestic”; foreign wars are being wound down.

Specifically, the Clinton Foundation will be exposed for human trafficking. Hillary Clinton has been running a crime gang for decades, and as Secretary of State was selling off everything American she could lay her hands on — especially valuable secrets. Obama is a total fraud from the start. The roll call of scandals that will now come to the surface is an essay in itself: one tweet wasn’t enough space to list them all! There will be Nuremberg-like trials for war crimes. Gitmo is going to be very full.

This is a real war. Some of us are fighting it with every asset we have, because we understand the stakes. The nature of this secret occult war, fought largely with intelligence assets, is unlike any before. Information warfare happens inside people’s heads, and in everyday social settings. It cannot be acknowledged by the mass media because they are active combatants and enemies of the people. Stop treating them as if they are involved in legitimate journalism: they are fighting to keep control over you and your loved ones.

The good news is that their psychological warfare, used to sell social division and violent conflict, is about to be fully exposed and ended. Our society will be transformed for the better — but only if we unify against this manifest wrongdoing. Some of the horrors that household name media companies have been covering up — especially wicked crimes against children — will deeply upset you (at least if you have a shred of humanity in your body).

The silver lining is that these revelations — if yet to formally emerge — will help us to overcome our historic divisions. We are going to have to get past old left/right fights, rebounding accusations of racism, and hard feelings on both sides of the “conspiracy theorist” divide. We now know the real “conspiracy theory” was a media plot against us all — by criminals who own propaganda factories. They have used this power to brainwash the public to accept their contrived state of affairs as being normal — and even desirable.

To confront the horrific truth of the “Russian collusion” hoax takes courage and conscience. The “Where We Go One We Go All” ethos welcomes everyone in the fight against such evil, even if a little tardy to the battlefield. Please do reflect hard on whether you are standing on the right side of history. I implore you to join us in our mass jailbreak from their media-made prison of the mind. Help us to put these thieves of liberty into real prisons — where they belong.”

the bandaid on the finger is symptomatic of spirit cooking ritual.

Grab a constitution and read up (no slight to you intended)

The trial portion takes place in the Senate with the Cnhief Justice presiding. All the House does is vote to approve impeachment.

If planned right, the Senate will be *forced* to hold a trial; you have to impeach him to find out the charges.


Sorry Cletus, but I think there has to be some kind of grounds for the impeachment and those grounds must have substance. You can’t impeach a president on the grounds that he jay walked. It does not rise and cannot rise to the level of high crimes and misdemeanors. The Senate will find him either guilty or innocent of whatever high crimes or misdemeanors the House says he committed.


The problem with what I think I hear you saying is that both political parties would be impeaching each others presidents every time they got into office. I know, I know, it kinda seems like we are in the tit for tat game right now, but this time it’s because the evil ones are caught and are about to be washed up and hung out to dry.

It took 42 posts for them to start following my prediction in #1403.

When a delusional person is confronted about their delusion, it is typical to build the person confronting them into the delusion.

Soooo ... RR was in on the obstruction, eh? Does he speak Russian?

1,553 posted on 03/24/2019 9:51:47 PM PDT by EasySt (Say not this is the truth, but so it seems to me to be, as I see this thing I think I see #KAG)
[ Post Reply | Private Reply | To 1448 | View Replies]
To: MNDude
I challenge anybody to point out a single Bullet Hole from either mosque. There were not any, the entire fiasco was nothing but a gun-grabbing exercise. I suspected as much the moment I heard that the video and the manifesto had been banned. No doubt the New Zealand PM will receive one of those meaningless Nobel Peace Prizes... And the whole world has been played for fools by the Left and the muslims. That Ardern woman's sympathy is as fake as the 'dead' body that gets up and walks away. A pox on her!
1,554 posted on 03/24/2019 9:51:50 PM PDT by Fred Nerks (FAIR DINKUM)
[ Post Reply | Private Reply | To 1470 | View Replies]
To: BlueMondaySkipper
Found out today that on of our lake neighbors was on the ship

Wow! He has a harrowing tale to tell. Glad he is OK.

They can have some fun the next few days (before DECLAS) asking the public if it is “Obstruction” for person to DEFEND himself vocally against false charges ... charges without a scintilla of evidence ... i.e., LIES. 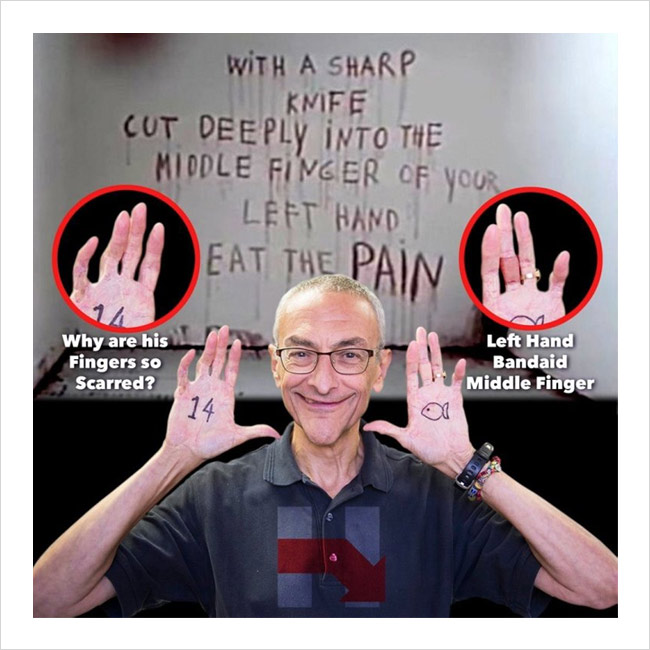 DiGenova brought Light to Darkness tonight on FOX when he said that the key statement of Mueller’s Report was: “ There was found NO EVIDENCE of Collusion.

With that one deft declaration it is that statement, according to DiGenova, wherein Mueller immediately Implicates the Obama principal intel chiefs, BRENNAN, KLAPPER, FBI Director, COMEY, for ever opening a case against a sitting president.

Certainly Rosenstein is implicated, for acting WITHOUT EVIDENCE, to appoint a Special Counsel.

DiGenova insists there shall be a Special Counsel appointed by Barr, to investigate all these charactors, if the FBI is ever to be restored with Trust.

This sure makes sense, because we have an Election coming up, and the toe of the shoe used pointedly against TRUMP shall be turned against the real and actual Domestic Enemies, who all together have been running amok in the USA, acting against the country, under the cover of these Respected Institutions and Agencies and political campaign operations, all the way to the Obama White House— into the Oval Office.

1,559 posted on 03/24/2019 10:02:09 PM PDT by RitaOK (Viva Christo Rey! Public Ed & Academia are the FARM TEAM for more Marxists coming, infinitum.)
[ Post Reply | Private Reply | To 1523 | View Replies]
To: bitt
Hey Bitt...I did a little background on this guy and his twin brother...they have an anti-Trump pod cast and very active on twitter/facebook in the resistance. But to get to the point they boasted that Q had gone after them and failed......you might want to rub in their faces the ten grand......or perhaps you guys know the people who went after them. They're arrogant leftists in their 30's..