Video Let us pause for a moment and reflect on the fact that 20 years have passed since Windows 98 memorably fell over during Bill Gates' presentation at Comdex.

A nervous-looking Chris Capossela, now chief marketing officer at Microsoft, attempted to plug a scanner into a Windows 98 PC while Gates looked on. The intent was to demonstrate the plug-and-play abilities of the upcoming OS. The result was an all-too-familiar Blue Screen of Death (BSoD), and a "whoah..." from Capossela.

"That must be why we're not shipping Windows 98 yet," quipped Gates.

As Windows 10 Springwatch approaches its third week, one can only imagine that something similar must have happened somewhere in a Redmond meeting room shortly before the update was due to be unleashed on an expectant public. The latest version of the operating system, unofficially dubbed the Spring Creators Update, is unexpectedly BSoDing for some testers, we're told.

As folks await the release, comfort can be drawn from the fact that while the world may have changed in a variety of distressing ways over the past 20 years, and the Comdex IT conference itself is long defunct, Windows 10 can still point the way back to simpler and happier times.

By generating a BSoD when you least expect it. ®

I was on the Win95 dev team as a hardware tester.

At one point we had a build that would allow us to run 5 or 6 virtual machines of Win95 within Win95 but pulled that capability out.

Don’t know why they did but it was cool to watch :)

I could be remembering wrong but Windows 98 technically did not have the blue screen of death. That happened with NT and later builds based on that version.

I’ve lost more work from 10 updating than I’ve lost since the PC was invented. I hate it for that reason alone.

I'd say not. Then again I have a lot of experience with many different operating systems, not just those for PCs.

Let's see. I have supported MVS(IBM mainframes), MPE-V(HP minicomputers), VOS(Stratus minicomputers), Ultrix (DEC-Unix), AIX (IBM Unix), Solaris(Sun Unix), VMS(DEC minicomputers), Linux(various and sundry versions), FTX (Stratus Unix), OS2, and all of the various Windows incarnations. I'm reasonably sure I left some out. Each had it's own strengths and weaknesses. Some were extraordinarily resiliant, for instance, you could pull a motherboard out of a Stratus box running VOS or FTX and the box just kept on running. AIX was an excellent Unix in many ways. VMS was an uptime freight-train. MPE-V was doing some really cool things with networking that I absolutely loved as an administrator. I recall logging into an AIX box once that had 5 years(!!!) worth of uptime when I was asked to take over support of it. I really hated having to patch that box the first time. No version of MS-Windows has ever had any kind of reliability. For quite a while Windows (I think it was XP) had a bug where the system would hang with a BSOD after about 50 days. It was a hard stop, every single time even if the system was doing nothing for that entire time. It took ages for them to even uncover the bug because the systems were generally so unstable anyway. Every version of MS-Windows has been a virus-magnet, and until Windows 7 or so, always seemed to have security as a bolted on afterthought.

If your computer is a toy that you like playing games with, I'm sure it's fine. Some of us want to do actual work with our computers though.

45 posted on 04/20/2018 8:11:04 PM PDT by zeugma (Power without accountability is fertilizer for tyranny.)
[ Post Reply | Private Reply | To 36 | View Replies]
To: zeugma
Yes, I'm talking to myself. This is a follow-up to my previous comment about MS-Windows crashing after 50 days. Some of you nerds might remember, or at least enjoy it...

This was stolen from this page.

Why Windows 95 and Windows 98 would crash after 49.7 days of uptime

There’s a famous bug in Windows 95 and Windows 98 (now patched) that caused these systems to stop functioning after 49.7 days of uptime. I used to wonder how this happened – in addition to wondering how many Windows 95 / 98 systems could achieve such uptimes to begin with!

Finally, I did a little math and figured out what must be behind this bug. It’s actually quite cute.

First, we need to know about a function called GetTickTime which is part of the Windows API. This function returns a DWORD value representing the number of milliseconds which has elapsed since the system has come up.

Finally, we can find out how many days’ worth of milliseconds we can fit in the DWORD:

Voila! After 49.71 days, the number of milliseconds since startup exceeded the maximum value of a DWORD, and rolled to 0 (kind of like the odometer on Al Bundy’s Dodge rolling to 0 after the 999,999,999th mile)

Depending on how you process the return value of GetTickCount(), this may or may not be a problem. Clearly some code in Windows didn’t handle this too well, and Windows hung.

Many old games available for cheap at GOG.com - downloadable and reformatted to run on Win 7. I still play the old Might & Magic games, Baldur's Gate, Wizardry, Ultima, etc. Not sure they would work on 8 or 10 though. I'm sticking with Win 7 as long as I can.

As good as it was, I think Win 2K was better. Before the 6 service packs, it was very fast and the OS only used 35 MEGabytes. After installing the 6th service pack, it used about the same memory as XP and slowed to about the same speed, but it couldn’t do as much. I think MS wanted to cripple it to sell the newer and much shinier XP.

48 posted on 04/20/2018 9:03:30 PM PDT by Dalberg-Acton
[ Post Reply | Private Reply | To 15 | View Replies]
To: DouglasKC
> I could be remembering wrong but Windows 98 technically did not have the blue screen of death. That happened with NT and later builds based on that version.

Technically you’re correct. The name was attached to the NT crash screen. Prior to that, a DOS-based Windows brought up a Blue Screen with the message about the crash, so after the BSOD became famous, the name was back-ported to the DOS-Windows screen, which is technically what Win98 threw up at COMDEX.

However, in the common parlance and understanding, the BSOD now is applied to both equally.

This is my favorite version: 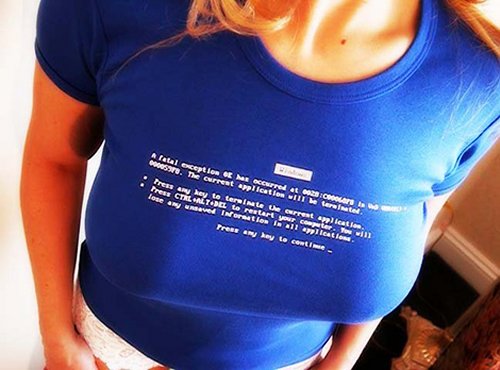 Um, yeah, no. Let’s just say, that was the word passed down in the halls of power of a certain Redmond based software company. I can tell you that some audio hardware manufacturers did this as well.

Great story, I never knew about that. Mainly because I never had a DOS-based Windows system that managed to accumulate 50 days of uptime.

Yep, they’ve done that repeatedly. The hardest thing MS has had to do is kill off their successful products to be able to sell the next release.

While studying for my Winnt 4.0 MCSE cert I constructed a home network. I had one corner of a back bedroom that was susceptible to mildew so I located the PC running NT server there and strung Ethernet to the rest of my mockup. It emanated a soft heat that kept the walls dry.

When I moved to my new home I got curious and ran uptime on the server before shutting down. It had been running nonstop for over 4 years. I decided to do a full backup - which was a good idea because the HDD wouldn’t spin up after the move!

Awesome! NT4 was pretty amazing for its time.